The Lamborghini Bravo was a concept car designed by Marcello Gandini at Bertone for Lamborghini. It was first presented in 1974 at the Turin Auto Show.

The Bravo was designed to showcase ideas for a replacement to the Urraco. The completely working prototype featured a 3L 300 hp (220 kW) V8 that powered the rear wheels, and underwent nearly 168,000 miles (270,000 km) of testing before it was placed in the Bertone museum. It was never put into production, but many styling features were inspired by the Countach, including the angular features and the window arrangement, but the interior was never more than what was barely necessary to operate the vehicle.

In 1987 it was considered for production as a companion car to the Bertone built Fiat X1/9. That "Project 1" was however ended when Fiat stopped the production of the 1.5L SOHC engine and rear-mounted 5-speed trans-axle.

Car was sold in auction at Villa d'Este (Italy) on 21 May 2011, for the highest bidder of €588,000. Prior being offered at the auction the Bravo was the only car from the Bertone Museum that was "refreshed". 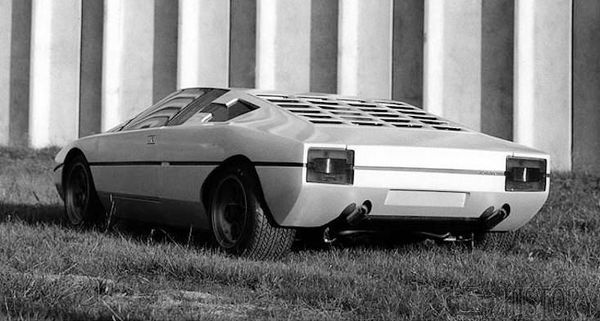