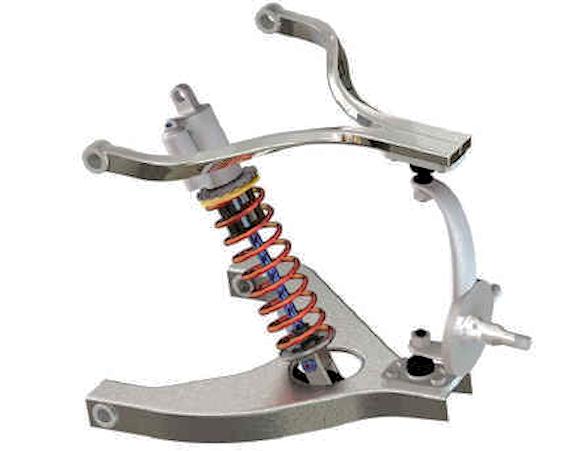 The double wishbone suspension was introduced in the 1930s. French carmaker Citroën used it since 1934 in their Rosalie and Traction Avant models. Packard Motor Car Company of Detroit, Michigan used it on the Packard One-Twenty from 1935.and advertised it as a safety feature. Prior to the dominance of front wheel drive in the 1980s, many everyday cars used double wishbone front-suspension systems, or a variation on it. Since that time, the MacPherson strut has become almost ubiquitous, as it is simpler and cheaper to manufacture. In most cases, a MacPherson strut requires less space to engineer into a chassis design, and in front-wheel-drive layouts, can allow for more room in the engine bay. A good example of this is observed in the Honda Civic, which changed its front-suspension design from a double wishbone to a MacPherson strut after the year 2000 model.

Double wishbones are usually considered to have superior dynamic characteristics as well as load-handling capabilities, and are still found on higher performance vehicles. Examples of makes in which double wishbones can be found include Alfa Romeo, Pontiac, Honda and Mercedes-Benz. Short long arms suspension, a type of double wishbone suspension, is very common on front suspensions for medium-to-large cars such as the Honda Accord (replaced by MacPherson struts in 2013+ models), Peugeot 407, or Mazda 6/Atenza, and is very common on sports cars and racing cars.It also provide least camber change at bump and rebound condition.

In automobiles, a double wishbone (or upper and lower A-arm) suspension is an independent suspension design using two (occasionally parallel) wishbone-shaped arms to locate the wheel. Each wishbone or arm has two mounting points to the chassis and one joint at the knuckle. The shock absorber and coil spring mount to the wishbones to control vertical movement. Double wishbone designs allow the engineer to carefully control the motion of the wheel throughout suspension travel, controlling such parameters as camber angle, caster angle, toe pattern, roll center height, scrub radius, scuff and more.

The double-wishbone suspension can also be referred to as "double A-arms," though the arms themselves can be A-shaped, L-shaped, or even a single bar linkage. A single wishbone or A-arm can also be used in various other suspension types, such as MacPherson strut and Chapman strut. The upper arm is usually shorter to induce negative camber as the suspension jounces (rises), and often this arrangement is titled an "SLA" or "short long arms" suspension. When the vehicle is in a turn, body roll results in positive camber gain on the lightly loaded inside wheel, while the heavily loaded outer wheel gains negative camber.

Between the outboard end of the arms is a knuckle with a spindle (the kingpin), hub, or upright which carries the wheel bearing and wheel.

To resist fore-aft loads such as acceleration and braking, the arms require two bushings or ball joints at the body.

At the knuckle end, single ball joints are typically used, in which case the steering loads have to be taken via a steering arm, and the wishbones look A- or L-shaped. An L-shaped arm is generally preferred on passenger vehicles because it allows a better compromise of handling and comfort to be tuned in. The bushing inline with the wheel can be kept relatively stiff to effectively handle cornering loads while the off-line joint can be softer to allow the wheel to recess under fore-aft impact loads. For a rear suspension, a pair of joints can be used at both ends of the arm, making them more H-shaped in plan view. Alternatively, a fixed-length driveshaft can perform the function of a wishbone as long as the shape of the other wishbone provides control of the upright. This arrangement has been successfully used in the Jaguar IRS. In elevation view, the suspension is a 4-bar link, and it is easy to work out the camber gain (see camber angle) and other parameters for a given set of bushing or ball-joint locations. The various bushings or ball joints do not have to be on horizontal axes, parallel to the vehicle centre line. If they are set at an angle, then antidive and antisquat geometry can be dialed in.

In many racing cars, the springs and dampers are relocated inside the bodywork. The suspension uses a bellcrank to transfer the forces at the knuckle end of the suspension to the internal spring and damper. This is then known as a "push rod" if bump travel "pushes" on the rod (and subsequently the rod must be joined to the bottom of the upright and angled upward). As the wheel rises, the push rod compresses the internal spring via a pivot or pivoting system. The opposite arrangement, a "pull rod," will pull on the rod during bump travel, and the rod must be attached to the top of the upright, angled downward. Locating the spring and damper inboard increases the total mass of the suspension, but reduces the unsprung mass, and also allows the designer to make the suspension more aerodynamic.

Advantages include that it provides the engineer more free parameters than some other types do. It is fairly easy to work out the effect of moving each joint, so the kinematics of the suspension can be tuned easily and wheel motion can be optimized. It is also easy to work out the loads that different parts will be subjected to which allows more optimized lightweight parts to be designed. They also provide increasing negative camber gain all the way to full jounce travel, unlike the MacPherson strut, which provides negative camber gain only at the beginning of jounce travel and then reverses into positive camber gain at high jounce amounts.

The disadvantages are that it may take more space and is slightly more complex than other systems like a MacPherson strut. Due to the increased number of components within the suspension setup it takes much longer to service and is heavier than an equivalent MacPherson design.