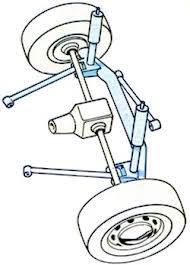 The de Dion tube was named after Comte Jules-Albert de Dion, founder of French automobile manufacturer De Dion-Bouton. The tube, however, was invented around 1894 by co-founder Charles Trépardoux for use on the company's steam tricycles.

A de Dion tube is an automobile suspension technology. It is a sophisticated form of non-independent suspension and is a considerable improvement over the swing axle, Hotchkiss drive, or live axle.Because it plays no part in transmitting power to the drive wheels, it is sometimes called a "dead axle".

De Dion suspension uses universal joints at both the wheel hubs and differential, and uses a solid tubular beam to hold the opposite wheels in parallel. Unlike an anti-roll bar, a de Dion tube is not directly connected to the chassis nor is it intended to flex. In suspension geometry it is close to the trailing beam suspension seen on many front wheel drive cars, but without the torsional flexibility of that suspension.

The benefits of a de Dion suspension include:

There are costs, however:

Use in production cars

The Smart Fortwo and Smart Roadster micro-compact cars produced by Daimler AG, Mitsubishi i kei car produced by Mitsubishi Motors and the Caterham 7 (a development of the Lotus Seven after Lotus sold the design rights to Caterham Cars), are the only cars currently in production that utilize this arrangement, as well as the products of some kit car companies. A recent vehicle to use this suspension coupled with leaf springs was the Ford Ranger EV. The American built MV-1 van by VPG also uses this suspension in the rear with leaf springs and is just starting production in spring 2010.

de Dion suspension characteristics: Camber change on one sided bumps, none on rebound. de Dion tube is shown in blue. The differential (yellow) is connected directly to the chassis (orange).