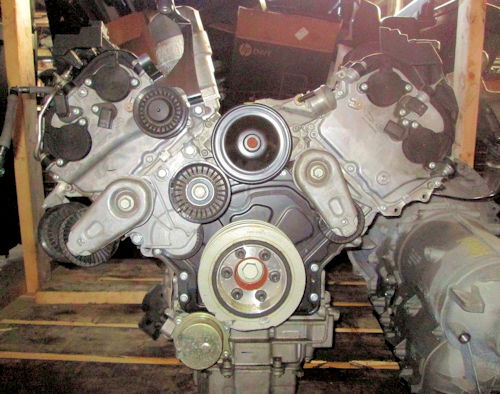 The AJ126 is a 3.0-liter V6 engine made by Jaguar Land Rover (JLR), which replaced after the complete elimination of the Ford used to date and related to the Ford Duratec V6 AJ

The AJ126 is basically based on the Jaguar AJ133 V8. Due to the external similarity of the housing and cylinder heads both engines, d. H. Both the V6 and the V8 are manufactured on a production line, since only minor changes to the tools and processes are necessary. A relationship with engines from the house Ford does not exist. The AJ126 in the JLR Group replaces the previously used AJ-V6 with 60 ° cylinder angle.

The main structural components of the engine are all manufactured from aluminum alloy. The engine is built around a very stiff, lightweight, enclosed V, deep skirt cylinder block. A structural windage tray is bolted to the bottom of the cylinder block to further improve the block stiffness, minimize NVH (noise, vibration and harshness) and help reduce oil foaming. To further enhance the stiffness of the lower engine structure, a heavily ribbed sump body is installed. The sump body also helps to reduce engine noise.

The four camshafts incorporate VCT (variable camshaft timing). VCT allows the timing of the intake and exhaust valves to be adjusted independently of each other. The VCT system is controlled by the Bosch ECM (engine control module) using information from CMP (camshaft position) sensors.

The supercharger is located in the 'vee' of the engine and is driven from the crankshaft by a dedicated secondary drive belt.

The AJ126 V6 is basically an AJ133 V8 engine that has 2 fewer cylinders and is made on the same production line as the AJ133. It shares a very similar block as the supercharged V8 AJ133, with some differences such as reduced bore size. Cylinder heads are also derived from the V8 engine. The engine features a balance shaft to drive the oil pump and balance the crankshaft. Vehicles use this engine:

Overview of AJ126 Engine and Series