The A- Series is a direct-injection , four-cylinder diesel engine with turbocharger and two overhead camshafts ( DOHC ) and four valves per cylinder . The motors are of Hyundai / KIA in Ulsan ( South Korea ) made .

The engine block is made of cast iron , its cylinder head made of light metal . Integrated in the engine block works a double balance shaft  . Engine control and injection system are supplied by Bosch  . The engine has a dry weight of 263.3 kg in the 140 hp version, the 163/170 hp variants weigh 269 kg .

The idling speed 750 / min  . The power transmission from the crankshaft via three timing chains . One of them runs to the camshaft , the oil pump and the balance shafts. The ancillaries are driven by a V- belt. This is checked every 24,000 km and replaced only when needed .

The type of valve actuation has not been described, but it does include a hydraulic tappet  . It resembles either the D - or the Delta series.

For faster warming of the interior, many vehicles with A engines have a heater for the cooling water circuit . The unit can be recognized by a quiet whistle or hum after switching off the engine in cold weather. It is mounted in the engine compartment and additionally heats the cooling water by burning diesel. As a result, the engine faster reaches the operating temperature and the heating of the interior of their effect. The component is an essential part of a parking heaterwhich could be retrofitted at low cost. In other diesels of the manufacturer, there is an electric heater in the air flow of the internal ventilation. He would require a complete heater kit, but heats the indoor air much faster.Although not classified by the manufacturer in series, in addition to the original version a revision of the series recognizable, hereinafter referred to as series 2.

The A-series stood with 2.5 L displacement exactly in the middle between D (up to 2.2 L) and J-series (up to 2.9 L) when it launched in 2000 as the Group's third car diesel series. While the D-series was developed together with VM Motori , the J-series came from KIA. The A-Series is the only one of the three fully developed by Hyundai. It is also, the name implies, the first of Hyundai self-developed for diesel cars, at KIA this was the almost simultaneous published " J3"With 2.9 L cubic capacity. Previously developed in Hyundai development only gasoline engines and large-volume commercial vehicle diesel. The merger with KIA in 1999 is also the reason for the independent despite their Hubraumnah close, because independently developed in the company developed two rows A and J. Without the merger, both series would probably be broader. While only the 2.9-liter engine from the J-series is comfortable for car applications, this role in the Hyundai range is taken up by the 2.5L A diesel engine. The previously existing 2.5L diesel D4BH and D4BF from 1996 were based on the Mitsubishi 4D56. Due to its low power through indirect injectionand noise-intensive, high compression, they were only suitable for commercial vehicles .

To achieve the comfort level of car applications, the new A-Diesel took over the two balance shafts of its predecessors. They rotate in opposite directions to the crankshaft and thus reduce noise, the cause of which would be energy losses in the single-digit PS range, which are thus also avoided. It complements this with struts in the lower part of the engine block, the complete encapsulation of the three timing chains, and a four-point engine mount. In order to meet the load requirements expected in off-road vehicles, the engine also has internally cooled pistons .

Three years after its debut, the engine received a first revision in 2004. The torque was increased from 314 to 343 Newton meters and installed a new intercooler. This reduced consumption according to the Euro standard by ten percent. In addition, a two-mass flywheel has been added to the manual gearbox belonging to this engine , which reduces gear noise in small gears  .

The direct injection takes place via nozzles reaching from above into the cylinder. The nozzles are supplied by a fuel line for all cylinders ( Common Rail ), in which the diesel is at 250 to 1360 bar. The latter figure indicates that it is a first generation system ("CRS1") . The injection is divided into two stages as in the first car diesel direct injection from 1989, which improves the running culture as the combustion process in the cylinder is protracted . In addition, smaller amounts of fuel distribute better in the cylinder, resulting in more homogeneous mixture formation and thus less oxygen-rich, nitric oxide-producing and oxygen-poor, soot-producing nests . Later diesels increased the pressure and the partial injections to further improve exhaust emissions.

This series has no soot filtration or nitrogen oxide reduction in exhaust aftertreatment. This consists only of an oxidation catalyst , which replaces the conventional three-way catalyst due to the high amounts of oxygen in the exhaust gas comparison to the gasoline engine . The effect of the oxidation catalyst and the non-electronic, up to 40 percent exhaust gas recirculation corresponds to that of the D series .

Although the engine complies with the Euro 3 emission standard , it is classified within this category because of the permissible weight of the Group III vehicles it is driving. Thus, the taxes are similar to those of a Euro 2 vehicle .

The Korean Chonnam National University carried out a study in 2005 with this engine, in which three fuel variations were tested for pollutant reduction. In addition to a standard diesel fuel 15% bioethanol were added to the same and thirdly to the bioethanol, a cetane improver for easier auto-ignition of the diesel mixed. The latter mixture reduced the number of nanoparticles by about 35%, as a higher cetane number means fewer long-chain hydrocarbons . Short-chain constituents burn more completely. However, so-called refined fuels cost more in the production and are usually offered as a premium brand at gas stations.

All engines in the series have a turbocharger . This promotes more oxygen in the cylinder chamber, as would normally flow, whereby the engine can add more fuel. As a result, the performance increases to that of a larger displacement, the capacity can be provided by means of motor control even at low speeds. Thus, and by the smaller displacement friction losses are reduced, whereby the consumption is below that of a turbocharged, larger engine. This first series uses a Garrett GT 1752S . This has a turbine diameter of 17 mm on the exhaust side and 52 mm on the intake side .

The second series, launched in March 2006, features a second-generation injection system ("CRS2")  , in which the common rail is now fueled at 300 to 1600 bar . The number of injections per ignition process was also increased, the system allows a subdivision into up to eight, but the number used was not published. In the D series , the same system was set to five single injections. The newly added post-injections serve for the partial combustion of resulting soot particles. The benefits of subdivision increase as the number of injections per ignition increases.Exhaust gas recirculation now works electronically and thus more precisely than in the predecessor series  .The engine achieves the Euro 4 standard, even without the optional or later retrofittable, open particle filter . Like the predecessor series, however, this is also assigned to this group because of the permissible weight of the Group III vehicles it drives. This equates to a Euro 3 vehicle taxation . 2011 was followed by a Euro 5 variant with standard particulate filter and significantly reduced compaction to improve the running culture.

In this series, the manufacturer switched to a turbocharger with variable geometry. Its function corresponds to that of the R series .A BorgWarner BV43 is used  . With this, the South Korean joint venture of BorgWarner with the supplier Korea Flange Company began in March 2005 in the production of this turbocharger. Later products of this "SeohanWarner Turbo Systems" are the turbochargers of the J and S engine series . Production site is Pyongtaek  . The BV43 belongs to the manufacturer's third generation of variable turbochargers and was first used in the Mercedes Benz A200 CDI in 2005  . The first generation was used in 2003 in the three-cylinder diesel of the Audi A2 .

The average real consumption of this series is 10.7 l / 100 km for off-road vehicles and 9.2 for high-building vehicles, with economical driving it reduces to 7.9 and 8.8 l.

For Sorentos, which were produced until the summer of 2004, took place in November 2004, a recall. In this case, the pulley of the alternator was replaced. Over these runs the V-belt for all ancillaries, including the alternator. Their pulley was faulty and could possibly damage the belt. If this were defective, the ancillaries would no longer be driven. In addition to the alternator, these include the servo pumps for steering and brake power assistance, as well as the water pump for engine cooling  .

With the A-engines with 140 HP it came with individual drivers to the unmediated going out of the engine. Only after a waiting time, the vehicles could start again, often then the error code 1185 or 1188 deposited. Partially fall off the injectors. Both are not a production problem, but a consequence of non-compliant fuel filter replacement intervals (every 30,000 km) or lack of fuel quality with a filter added more quickly thereby, If small foreign particles are released from the filter, they damage the injectors due to the high pressure prevailing there. The injectors are leaking in the sequence or expire, the former causes mostly perceptible odor in the interior or significant excess consumption. An intermittent injector can be recognized by non-circular engine running and power loss. When storing diesel in tanks outside petrol stations, bacteria can also accumulate, resulting in deposits on the injectors . For correction, the manufacturer recommends an updated control software in addition to a replacement of the filters.

Isolated is also a faulty brake light switch reason for the going out of the engines. This is located in the footwell behind the brake pedal. It signals the control unit to depress the brake pedal so that the control unit simultaneously shuts off gas commands to prevent unwanted acceleration (if both pedals are accidentally pressed simultaneously). In the event of a fault, the switch can signal an always depressed brake pedal, whereupon the diesel supply is switched off. This concerns KIA Sorento, which was manufactured between September 20 and October 25, 2006. The switches installed here were exchanged by means of recall action . However, as with all components, the defect can occur occasionally in other years of construction, In all cases, a unique error code (brake light switch defective) is stored.In KIA Sorento with 170 hp, which were produced until February 2008, the mounting screws of the injectors have been partially tightened not according to the manufacturer. In a recall the screws were replace .

For the A-engine with 170 hp, a new control software is available, which reduces the maximum speed of the turbocharger to avoid thermal peak loads. The performance does not decrease. The original software allowed too high speeds, which favor a turbocharger failure. The resulting material particles can cause consequential damage in the injection system  .

1 variant until 2004 for KIA Sorento / Hyundai H-1 / from 2004 for both
2 Euro 5 / Euro 4 certified basic variants. The former replaced the latter and is combined with a 6-speed gearbox.
3 L: L ow-power version of an otherwise likewise named, in this case 163 instead of 170 hp. The abbreviation is not always listed.
4 V ariable Geometry turbocharger, VGT. Vaneblades vary the wind flow in the turbine, not the geometry of the turbine wheel itself. The German translation VariableTurbine Geometry is therefore misleading.

Listed are the worldwide installed A-motors for each model, not all countries are offered in all listed configurations. 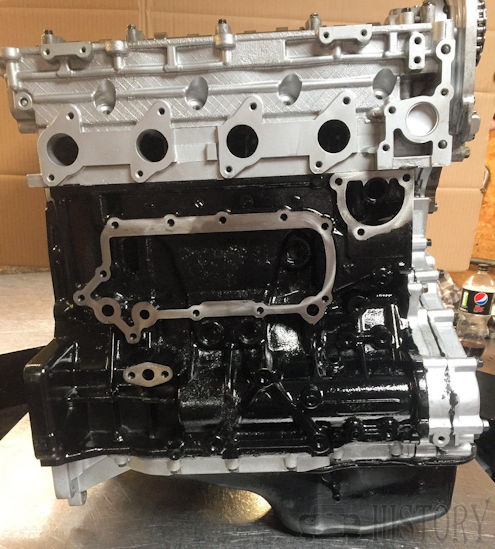