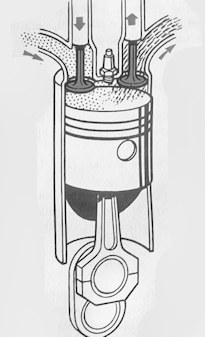 How a four stroke engine works. There are two basic types of engines in common use today, namely two stroke and four stroke. These take their names from the number of piston strokes necessary to complete the cycle between the introduction of the fuel and its exhaust to atmosphere. The four-stroke cycle demands more mechanical components in the engine but gives a higher thermal efficiency. It is therefore the more commonly used, except for some small motor-cycle, scooter, lawn mower and motorboat engines and at the other end of the scale, in some large diesels.

In the four stroke or "OTTO" cycle — so called after the inventor - there is only one power stroke per cycle. The remaining three are referred to as idle strokes although they each form an indispensable part of the cycle. The power impulses from each piston in the engine are exerted in turn on the common crankshaft, the flywheel absorbs any variations in power and enables the motion of the connecting rods, pistons and valves to be continuous. The four strokes refer to intake, compression, combustion (power) and exhaust strokes that occur during two crankshaft rotations per power cycle.

The compression stroke compresses the mixture and places the crank in the best position to receive power. The power stroke exerts a thrust on the piston which, travelling downwards, applies the power to the crankshaft. The exhaust stroke scavenges the burnt gases from the cylinder and returns the piston to T. D. C. ready for the next cycle. It can be seen that there is only one power stroke and consequently one spark per cycle and the intake and exhaust valves open and close once. The crankshaft completes two revolutions every cycle, therefore the valve camshaft and the mechanism which produces the spark, are geared to revolve at half crankshaft speed.
We have mentioned the fact that the exhaust valve does not close until a few degrees after top dead centre and the inlet valve opens a few degrees before. The interval during which both valves are open, known as the angle of overlap, is used to ensure efficient gas charge and adequate scavenging of exhaust. The exhaust gas is expelled from the cylinder at a high speed and thus creates a partial vacuum in the cylinder which encourages the inflow of new mixture. The exhaust valve is closed in time to prevent the new mixture from leaving the cylinder.
Let us consider a single cylinder and assume that the parts which move are already in motion. The four strokes may be described as follows:

At the start of this stroke the exhaust valve is closed, the inlet valve is already open and the piston is at its highest position. While the piston is at this point, known as top dead centre (T. D. C.), only a small space, the combustion chamber, is left between the piston crown and the top of the cylinder. The piston is drawn down by the turning cranks and as the space above the piston increases, the pressure falls, thus creating a partial vacuum. Atmospheric pressure forces air in through the carburettor system, picks up vaporised fuel on the way and passes into the cylinder via the open inlet valve. When the piston reaches bottom dead centre (B. D. C.), the internal gas pressure is
still less than the atmospheric pressure. The inlet valve therefore remains open until the crank has passed through B. D. C., and turned approximately 50 beyond. At this point the inlet valve is arranged to close by the action of a spring.

The pressure of the gas trapped in the cylinder increases as the piston rises. At, or just before T. D. C., the plug sparks and ignites the mixture. Combustion occurs while the crank is turning from the instant of ignition to the most effective thrust angle.

The high pressure generated by the combustion of the mixture exerts a thrust on the piston and forces it downwards. The gas is burnt and most of its expansion pressure is exhausted by the time the crank has turned approx. 120 from the point at which thrust was applied. This crank angle is such that further thrust would have no effective turning power. The exhaust valve is therefore arranged to open before the crank reaches B. D. C., enabling the remaining pressure, no longer useable for thrust, to be utilised to drive out the burnt gases from the cylinder.