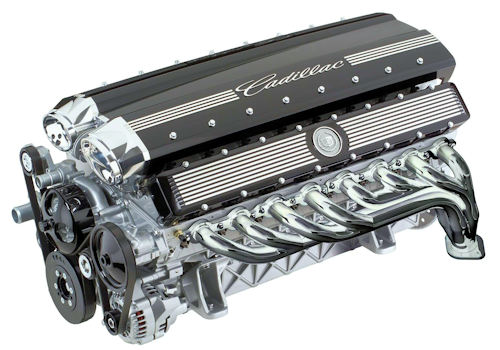 A V16 engine is a V engine with 16 cylinders. Engines of this number of cylinders are uncommon in automotive use.

A V16 engine is perfectly balanced regardless of the V angle without requiring counter-rotating balancing shafts which are necessary to balance Straight-4 and odd number of cylinder inline engines or counterweighted crankshaft like the 90° V8. In addition angles of 45° and 135° vees give an impulse every 45°, so are optimal solutions, for even-firing and non-split bearing crankshaft journals.

V16 engines are rarely used in automobiles because V8s or V12s of the same displacement produce just as much power, but are much less expensive to manufacture and maintain. The few V16s that have been produced were used in high-end luxury and high-performance automobiles due to their smoothness (low vibration).

Howard Marmon had begun working on the world's first automotive V16 engine in 1927, but was unable to complete the production 'Sixteen' model until 1931. By that time, Cadillac had already introduced their V16, designed by ex-Marmon engineer Owen Nacker. Peerless, too, was developing a V16 with help from another ex-Marmon engineer, James Bohannon.

The Series 452 was the most exclusive model of the marque from January 1930 until 1940, with this type of engine. Two varieties were built. From 1930 to 1937, Cadillac used a 452 CID (7.4 L), OHV motor with a 45° V. For 1938, a new 431 CID (7.1 L) design was introduced for the Series 90, with a flathead valvetrain and an angle of 135°; this resulted in a much lower cowl height. The 431 was in many ways a superior engine, producing as much power as its immediate predecessor while being far less complex, had a stiffer crankshaft which aided durability and smoothness, and even had an external oil filter, a rarity for any car at any price in those days. However, it was never as popular or highly regarded as its 452 CID predecessor.

By contrast, the Marmon Sixteen was a 45° engine made almost entirely of aluminium. Like modern engines, it used pressed steel cylinder liners. Just 400 Marmon Sixteens were produced between 1931 and 1933.

In 1988, a joint business venture between Claudio Zampolli and musician Giorgio Moroder produced the Cizeta-Moroder V16T which featured a 16-cylinder engine in a unique configuration, but which was not a true V16. Rather, the engine was made up of two flat plane V8s, mounted transversely, with gearing between the two providing a single output from the center of the engine assembly to the longitudinal transmission. It began production in 1991 but only a few cars were produced before the company closed its doors for good.

BMW also experimented with a V-16, eventually showing a 9-litre (~550 CID) version in the Rolls-Royce 100EX concept car, but it has been changed to a V12 for production due to the customer feedback. However, one of the Rolls-Royce Phantom Coupés which featured in the film Johnny English Reborn is powered by this V-16 engine. That was not BMW's first foray into V-16: BMW had conceived the Project Goldfish, adding four cylinders to the BMW M70 V-12 motor. The BMW Goldfish V16 motor had the displacement of 6.7-litre (414 CID), putting out about 408 hp (304 kW) and 637 N·m (470 lb·ft). That motor was also trialled in new Bentley Mulsanne in the early 1990s.

The first known use of a V16 in auto racing was by Harry Miller installing a custom-built V16 that he had built for a Cord "supercar" he had been working on into a chassis that he had built for the 1931 Indianapolis 500 driven by Shorty Cantlon. The car was competitive, charging from 26th on the grid to 3rd, but was slowed by unreliability, further exacerbated by having to change all sixteen spark plugs. Bryan Saulpaugh qualified the car third for the 1932 Indianapolis 500, but the car suffered a broken oil line on lap 55 and their race was over. Shortly after the race the V16 was removed and replaced with a conventional Miller four-cylinder. The car was re-assembled and rebuilt with an exact replica V16 in 1993.

The V16 was used in Grand Prix by the mid-engined Auto Union racing cars that rivalled the Mercedes from 1933 to 1938.

The BRM V16 delivered this power in a narrow, very lofty, RPM range. This made the car difficult to handle (but the sound made by the 16 small cylinders has been described as 'unforgettable'). The problem was caused by the supercharging system adopted. For expediency BRM chose it to be designed by Rolls-Royce, drawing on their experience of centrifugal superchargers for aircraft engines. Centrifugal superchargers are much more efficient than the more conspicuous Roots type, but they deliver high pressure only at high RPM.