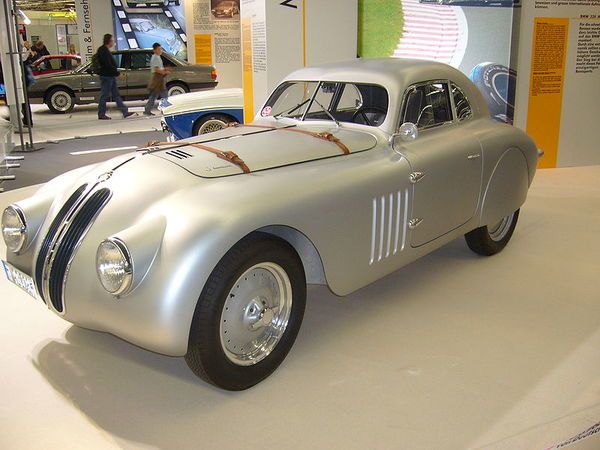 Ponton or Pontoon styling refers to a 1930s–1960s design genre—ultimately the precursor of modern automotive styling. The trend emerged as distinct running boards and fully articulated fenders became less common and bodywork began to enclose the full width and uninterrupted length of a car.The fenders of an automobile with Ponton styling may also be called Pontoon fenders, and the overall trend may also be known as envelope styling.

Origin of the trend

The term ponton styling may have derived from the wartime practice in Germany of adding full-length tread armor along each side of a tank, attached primarily on the top edge—which resembled pontoons. As this roughly coincided with automobile styling trend where bodywork, especially running boards and fenders, became less articulated—with cars carrying integrated front fenders and full-width, full-length bodywork—the design took on the "pontoon" or "ponton" descriptor.

One of the first known cars with a ponton body is the Bugatti type 32 "Tank" which participated in the 1923 French Grand Prix at Tours.

In 1924, Fidelis Böhler designed one of the first production cars with a ponton body, the Hanomag 2/10. The car's body resembled a loaf of bread earning it the sobriquet of "Kommissbrot"—a coarse whole grain bread as issued by the army.The economical car was produced from 1924 to 1928. Böhler built the core body around two side-by-side passenger seats. He dispensed with running boards and integrated the fenders in the body to save on weight. The cheap car became a best seller in Germany.

In 1935, Vittorio Jano, working with the brothers Gino and Oscar Jankovitz, created a one-off mid-engine prototype on an Alfa Romeo 6C 2300 chassis, which Jano had shipped to Fiume, Croatia in 1934. The brothers Jankovitz had been close friends with leading Hungarian aerodynamicist Paul Jaray, and the prototype, called the Alfa Romeo Aerodinamica Spider, featured ponton styling—an especially early and clear example of the bulbous, uninterrupted forms that would come to characterize the genre.

In 1937, Pinin Farina designed a flowing ponton-style body for the Lancia Aprilia berlinetta aerodynamica coupé, and also the open body on the 1940 Lancia Aprilia Cabriolet.

The 1946 Cisitalia 202 coupé, which Farina designed from sketches by Cisitalia’s Giovanni Savonuzzi, was the car that "transformed postwar automobile design" according to New York’s Museum of Modern Art (MoMA). MoMA acquired an example for its permanent collection in 1951, noting that the car’s "hood, body, fenders, and headlights are integral to the continuously flowing surface, rather than added on. Before the Cisitalia, the prevailing approach followed by automobile designers when defining a volume and shaping the shell of an automobile was to treat each part of the body as a separate, distinct element."  Also introduced in 1947, the Alfa Romeo 6C 2500 was another ponton-style Farina design which, together with those by Touring and others on the same chassis, has also been credited with setting the trend for post-war automotive design.

Rounded, flowing forms, with unbroken horizontal lines between the fenders— the style had identified as "the so-called Ponton Side Design" became "the new fashion in Europe", offered by Alfa-Romeo, Fiat, Rover and other companies.

An inspiration to American and Japanese manufacturers as well as to Europeans, Farina’s "ponton line" would be copied round the world. One of the first American cars to adopt it was the 1947 Studebaker Champion, designed by Virgil Exner and Roy Cole but sometimes erroneously attributed to Raymond Loewy. Another, the Howard "Dutch" Darrin-designed 1947–1950 Kaiser-Frazer, was said to have been the inspiration for the 1949 Borgward Hansa 1500, Germany's first sedan in the ponton style.

In the Soviet Union the GAZ-M20 Pobeda came into production in 1946, about 1 month after the first 1946 Kaiser rolled off the production line, and in Britain the Standard Vanguard went on sale the following year.

Ford and General Motors followed the trend with their own designs in 1949.

Examples of "ponton" in automotive contexts

The term is now commonly used in reference to Mercedes-Benz models from 1953–1962. For example a book about the marque refers to "the Ponton", the "Ponton saloon", "Ponton 220", "Ponton 220S and SE coupes and cabriolets", and "the Ponton models".

A General Motors document refers to the 1953 Olympia Rekord as "the first Opel with a full-width, or ponton, body shell".

In a reference work on alternative-energy vehicles, electrical-engineering academics used the term as a generic for saloon cars with three-box design ; also a 2007 German work on car design and technology mentions a "Rover-Ponton" (ponton-style Rover); and a French book on art and design also used the term in an automotive context in 1996.

The 1948–1950 Packard had a "'Ponton'-style side section with the fenders running through from front to back", according to a blogger who also describes the 1951 Packard Patrician as "one of the first cars that featured the new Ponton-style (sic) with integrated front-fenders (sic) at the same level with the hood and a curved onepiece-windscreen (sic)."