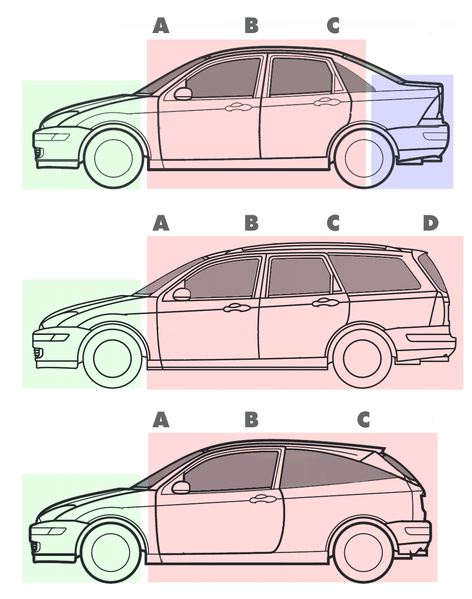 Pillars are the vertical or near vertical supports of an automobile's window area or greenhouse—designated respectively as the A, B, C or D-pillar moving in profile view from the front to rear.

In American and British English, the pillars are sometimes referred to as posts (A-post, B-post etc.).

Consistently denoting a roof's successive structural member provides a reference point for discussion. As an example, rescue teams employ pillar nomenclature to facilitate communication when cutting vehicles, for example with the jaws of life.

Pillars are implied, whether they exist or not; where a design's greenhouse features a break between windows or doors without vertical support at that position, the non-existent pillar is "skipped" when naming the other pillars. Thus a 2-door coupé or a three box designed sedan could have its rearmost pillar called the C-pillar even in the absence of a B-pillar. Conversely additional doors will create additional B-pillars, the B-pillars are then numbered, B1, B2, and so forth.

Vehicles omitting the B-pillar were once widely called pillarless hardtops or hardtops. In the early 1970s, General Motors broadened their definition of "hardtop" to include models with a B-pillar: "up to then, everybody thought a hardtop was a car without a center pillar."

In addition to the pillar nomenclature derived from viewing an automobile in profile, some older cars have a two-part windshield or split rear window, with the two halves separated by a pillar.