For the first time in the model's history, Honda developed two distinct versions of the Accord when the 5th generation model was launched; one version for the European market (launched in 1992) and one for the North American and Japanese market. Honda and the Rover Group created the European Accord and the Rover 600, a reflection of the past success they had with the Honda Legend and the Rover 800. This generation Accord was also sold in Japan as the Isuzu Aska, while some Isuzu products were sold as Honda products there also.

At its introduction in 1993, it won the Car of the Year Japan Award for the second time. 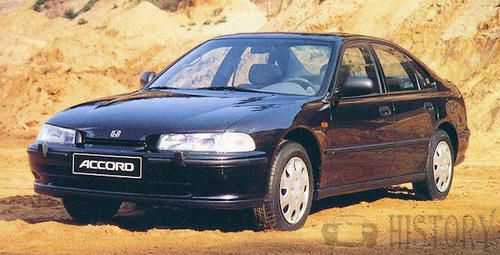 The 5th generation Accord for the European market was launched towards the end of 1992 and was not related directly to the North American 'CD' Accord. It was in fact the JDM Honda Ascot Innova which was based on the previous 4th generation 'CB' Accord. It was the result of a joint effort with the Rover Group that provided Rover with the 600 series. It was designed by Shigeo Ueno in late 1990.

In 1996, the European Accord received a minor facelift and was given a new front end (new headlights, bumper, bonnet and grill) and slightly different taillights. The styling of the facelifted Accord remained identical to the styling of the Ascot Innova (although the frameless doors were replaced with conventional items) and featured the design language first introduced on the 5th generation Honda Civic. The styling of the European Accord differed dramatically from the North American which featured a more conventional saloon styling compared to the European model's low slung, fastback inspired look which also incorporated rear quarter windows. The facelifted Accord was also equipped with two airbags as standard. 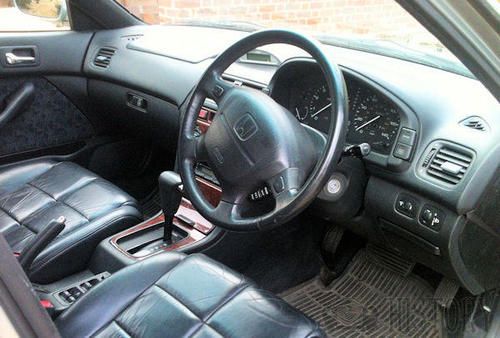 European Honda Accord had a compelx multilink rear suspension, which made is very maneouvrable in bends, while keeping a nice riding comfort. This generation of Accord is also considered to be one of the most reliable and pleasant to drive in the history of the model.

However, the European Accord did not spawn an estate or coupe version, Honda instead opting to import the coupe and estate (Aerodeck) versions of the North American Accord.

The 5th generation North American Accord was launched on September 9, 1993 and was based on the new 'CD' chassis. Larger than its predecessor, primarily to better suit the requirements of the North American market, the new model grew in width but shrunk in length, leaving it classified as a mid-size car in North America. It thus became too wide to fit within the favorable tax bracket in Japan, where its role was to be partially taken over by the slightly narrower second-generation Honda Ascot (sold at Honda Primo Japanese dealerships) and Honda Rafaga (sold at Honda Verno). Previous generations of the Accord sold in Japan were limited to a width dimension of 1,695 mm (67 in) while international models were slightly wider, however this generation no longer complied. The engines offered with the Accord also exceeded the maximum limit of 2000cc to remain in the favorable "compact" tax bracket. Development began in late 1989, along with the design process in mid-1990. The final design was selected by an early date of December 18, 1990 and frozen in 1991. Design inconsistencies in early 1992, caused several alterations to be made until April 1992, when a final freeze took place, ahead of scheduled 1993 production. Design patents were later filed in the United States on December 16, 1992 for the "CD". Production later began at Marysville assembly on August 24, 1993.

Honda of Japan marketed four different size engines in the Japan-Spec Accord Sedan:1.8, 2.0, 2.2 VTEC and 2.2 DOHC VTEC. The Japanese-spec Accord models were marketed as the following: EF, EX, 2.0EX, 2.0EXL, 2.2VTE, 2.2VTL, 2.2VTS and SiR. All Honda Accord versions were sold at Honda Clio locations in Japan.

The DX, LX and EX models remained the American trim lines while Canada retained the LX, EX and EX-R. The 5-speed manual transmission remained mostly unchanged, while the 4-speed automatic noted for its hard shifts, now included Honda's "Grade-Logic" shift program, which would prevent "gear-hunting" by holding the current gear while driving on a sloped incline. All Accord models received a more ergonomic interior with standard safety features such as dual airbags and reinforced side-impact beams. Exclusive to the EX was the F22B1 SOHC VTEC version of previous generation 2.2-liter 4-cylinder (making 145 hp (108 kW) up from 140 hp (104 kW) on the previous generation EX), anti-lock brakes (now an option for the LX), 4-wheel disc brakes, 15-inch alloy wheels, and a rear stabilizer bar. Leather was an option in the EX trim with leather equipped models now being referred to as EX-L. DX and LX models came equipped similarly to the previous generation and were fitted with a revised version of the previous generation's 2.2-liter non-VTEC 4-cylinder engine. This F22B2 engine was rated at 130 hp (97 kW) up from 125 hp (93 kW) the previous generation. The Accord was again named Motor Trend Import Car of the Year for 1994. The Accord coupe as in the previous generation looked almost exactly like the sedan, and was the last generation of the Accord to offer a wagon variant in North America until the introduction of the Accord Crosstour in 2009.

In 1994, the 1995 Accord debuted a V6 engine, the 2.7L C27 borrowed from the first generation Acura Legend, in the U.S. market. The V6 was offered in both the LX and EX versions of the sedan, LX models being referred to as LX-V6 and EX models as EX-V6. EX-V6 models came equipped similarly to the EX-L with leather seats being the only option in the EX-V6. Addition of the taller C27 engine required substantial alterations to the CD platform, with V6 models sporting a redesigned engine layout, taller front fenders, and a different hood than I4 models; however, these differences are difficult to spot without both models parked side-by-side. Both versions of the V6 received a dual-outlet exhaust, a 4-speed automatic transmission, 15-inch machined aluminum alloy wheels on the EX-V6 and 15-inch steel wheels with full covers on the LX-V6, and a slightly updated front grille. The Accord saw very few other changes for 1995 with the exception of a few different exterior and interior color combinations.

In 1995, the Accord underwent the usual mid-generation facelift for 1996. More rounded bumpers, a slightly modified front fascia with new signal lights and rear taillights gave the Accord a softer look. All Hondas now complied with the federal government's requirement of OBD II engine diagnostics though all three engine choices remained the same. In order to increase the Accord's competitiveness against its rivals in different international markets, Honda CEO Nobuhiko Kawamoto decided on one basic platform for the sixth-generation Accord, but with different bodies and proportions for local markets. In the U.S. the 1996 model lineup included the 25th Anniversary Edition, a model positioned between the DX and LX. The Special Edition trim package was introduced.

In 1996, Honda released the "Special Edition" version of the Accord (not to be confused with the SE). It was offered in three colors: Heather Mist Metallic, San Marino Red and Dark Currant Pearl. The Special Edition received a factory installed security system with keyless entry, single-disc CD player, body colored side molding, distinctive alloy wheels and a sunroof. It was offered in an automatic transmission only and was fitted with the same engine as the LX. Acclaimed for its handling, the 1996 Honda Accord has been known as one of the best handling Japanese mid sized sedans of all time, posting impressive lateral g figures of up to .89 g's.

In New Zealand, the 5th generation Accord was assembled at Honda's manufacturing site in Nelson and was released in March, 1994. It was available in LXi, EXi and EXi-S trim levels. A facelift was released in December 1995, which coincided with the release of VTEC engines in the upper-spec models. Trim levels were LXi, VTi, and VTi-S. These were the first NZ-market Accords to have airbags – two in the VTi-S, one in the VTi.

U.S. built coupe and wagon models of this generation were shipped to Europe with both left and right hand drive but there was no V6 option.

This generation of Accord is one of the most frequently stolen cars in the U.S.A. with the 1994 model being stolen more frequently than its siblings. The Acura Integra and Honda Civic are also popular targets for car theft.