For the sixth generation, Honda split the Accord into three separate models, designed for the Japanese, North American, and European markets. However, the wagon was discontinued in North America while the coupe was discontinued in Japan. This generation also spawned two distinctively branded performance versions for European and Japanese domestic markets, dubbed Type R and Euro R, respectively.

On the origin of these models, it is rumored that with the advent of the sixth generation Accord, "Honda England were let loose to build a car that would compete with Subaru and Mitsubishi's Evo. They came up with the Accord Type R, a lightened (around 1200 kg) track version with no sound deadening or luxuries". Honda Japan followed suit in 2000, "took the Accord Type R and developed the Accord Euro R (hence the 'Euro'pean tag)" which has a similar chassis, suspension that is interchangeable with European model, same engine (slightly detuned for European Type R), and nearly identical interior trim.

The Japanese models, introduced September 4, 1997, became narrower than the previous generation, returning to the favorable compact car tax bracket, except for Euro R and wagon, which were classified as the larger mid-sized classification. A nearly identical sister car, the Honda Torneo, replaced the previous Honda Ascot and the Honda Rafaga in Japan, which was sold at both Honda Verno and Honda Primo Japanese dealerships, while the Accord remained at Honda Clio locations. This was the last generation that was badge engineered as the Isuzu Aska.

When the previous generation Accord grew in exterior dimensions, this reclassified the Accord as a midsized car in Japan. The second generation Honda Inspire was manufactured in two platforms, with the smaller G20A five-cylinder engine installed in a shorter and narrower sedan that complied with "compact" regulations. This effort reflected Honda's positioning of Honda Clio as a luxury car dealership that sold the luxury sedans Honda Legend and Honda Inspire, similar to their efforts in North America with the Acura brand. Honda continued to offer the Accord station wagon in Japan. All trim levels sold in Japan were available with Honda's newly created, internet-based telematics service called Internavi.

The Euro R included a "red top" variation of H22A engine producing 220 PS (160 kW; 220 hp) at 7,200 rpm and 221 N·m (163 lb·ft) at 6500 rpm, 5-speed T2W4 manual transmission with helical Torsen LSD, Recaro seats, leather-wrapped MOMO steering wheel, sports suspension, sports exhaust (including 4-2-1 stainless headers) and an aluminum-alloy gear shift knob. It was also fitted with a unique factory body kit that included flares and was available in some colors not available to other Accords (such as Milano Red). The Accord (sold at Honda Clio locations) and the Torneo (sold at Honda Verno and Primo locations) are the same car, aside from minor cosmetic differences in the exterior, most notably front of the car.

The 2002 model was named the Euro-Rx. This model came with a few slight modifications from the 2000/2001 model. These included factory rear privacy glass, a titanium gear knob, optional Red-checker interior (original gold-checker) and bronze coloured alloy wheels. The high-stop spoiler also became standard on all models. Honda also addressed two common issues that had become apparent. The ECU was upgraded to resolve the issue of cold-starts causing hesitation on acceleration and the gearbox syncros were upgraded to a higher quality alloy to lengthen their lifespan.

The Accord SiR was based on the SiR-T, but used the S-Matic automatic transmission. The engine was rated at 180 PS (130 kW; 180 hp) but with better midrange characteristics. Moving the gear-stick over to the right allowed manual selection of 1st, 2nd, 3rd, or 4th gear using up and down shift actions just like the sequential gearboxes used on the JGTC NSX. When a particular gear is selected, the gear stays in position at all rpm. When pushed against the rev limiter, the engine would bounce against it just like a manual. However, the gear ratios for each gear were the same as the normal mode. The transmission still worked like a normal automatic transmission in all other operating modes.

The basic equipment across all versions of the Honda Accord

The European Honda Accord, also made in Swindon, became very different from its cousins in terms of styling, and was also shorter than the JDM and American-market Accords. It was available as a sedan and a 5-door hatchback (liftback), with the U.S.-imported Coupe completing the range. It was a platform improvement of the previous generation "European Accord", a joint project with the Rover Group that created the Rover 600 as well as the Honda Ascot Innova. Upon design approval of the sixth generation Accord in early 1995, this variant was further developed for the European Market.

The standard trim (and quality of interior) of the Honda Accord was above the standard of similar cars (Ford Mondeo, Peugeot 406, Vauxhall Vectra etc.) in its class. The basic S came with ABS, alarm, engine immobilizer, and air-conditioning as standard equipment, with the SE adding the options of metallic paint, cruise control, climate control and later, satellite navigation. The 1998–1999 ES came equipped with all those features (except satellite navigation still optional) and with a full walnut and leather trimmed interior with heated front seats. This was replaced by the SE Executive model in late 1999.

The EU version had a minor facelift in 2001 including a revised grill, alloy wheels, bumpers and both rear and front lights. In 2001 the trim range was expanded with a Type-V; coming fully loaded with leather trim as standard equipment, satellite navigation and a tiptronic automatic transmission as optional. The Sport model which was as the SE, came with adjusted styling, spoiler, and a color-coded side skirt (as opposed to black plastic).

The Accord Type R was a performance variant of the standard Honda Accord, sold in European markets. Apart from a similar yet different body, the European Type R is largely identical to the Japanese CL1 Euro R both mechanically and performance-wise, offering the same "red top" H22A engine, however in its different H22A7 version (compared to H22A for Euro R) producing a little less at 212 PS (156 kW; 209 hp) (compared to 220 PS (160 kW; 220 hp) for Euro R). The engine was mated to U2Q7 5-speed manual transmission with helical Torsen LSD. Recaro seats, leather-wrapped MOMO steering wheel, stiffer suspension, dual exhaust (including 4-2-1 stainless headers) and an aluminum-alloy gear shift knob also came standard. Like the Euro R, the Type R was fitted with a factory body kit. Differences from standard model include hydraulic power steering on Type R. In many magazine and journalist road tests, the Type R was praised for its handling across the board. As a result, it is often compared to the slightly older Integra Type R, which to this day is still viewed as the best handling FWD car ever built. The later EP3 Civic Type R failed to receive similar praise.

The model was facelifted in 2001 with modern updates to the bumpers and fog lights, but removing the Factory Fitted Bodykit. The electric radio aerial was also replaced, with a smaller "Bee Sting" style aerial situated at the rear of the roof line. A 6 speed Gearbox was also introduced. In addition, the exhaust was changed from a dual exit system to a single exit one. The interior and other parts stayed identical.

The Type R Variant of the Accord was never sold in high demand (reportedly less than two thousand were sold in the UK), possibly due to its family four-door configuration. However, it is the most Internationally awarded variant of the Type R range ever. This may be in part to the continued and battling success of the Accord in the British Touring Car Championship (BTCC) and other European Super Touring Car Championships. As a result, the Accord Type R is a rare but very well appreciated sight on European roads, with a very strong fan following. Former F1 World Champion, Damon Hill, was reported to have owned an Accord Type R up until 2009. 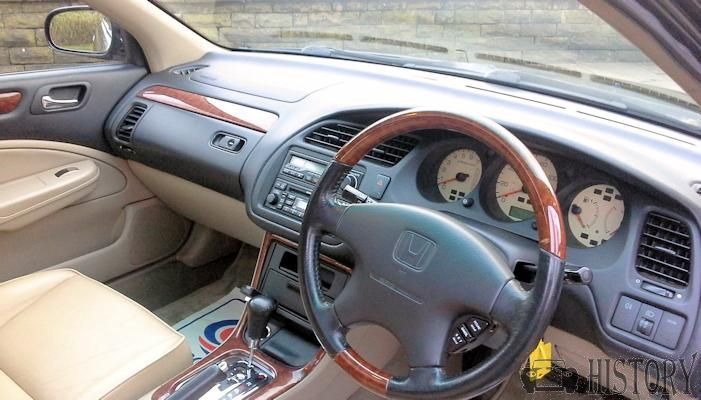