The 4th generation Honda Accord, introduced on the "CB" chassis, was unveiled in 1989. Although much larger than its predecessor the sedan's styling was evolutionary, featuring the same low slung design and wraparound rear window as the 3rd generation Accord. For the first time a 3-door hatchback was no longer available internationally.

This was one of the first U.S. production cars to feature optic reflectors with completely clear lenses on the headlamps replacing the more conventional lens diffused lighting. Unlike most manufacturers moving away from traditional sealed beam lighting, Honda chose to transition to a multi-reflector headlight style while maintaining the use of a glass lens instead of plastic. The styling reflected influences from the flagship Honda Legend, as Japanese Accords were now sold at Honda Clio dealerships, where the Legend, and the Honda Inspire, were sold. The growing popularity of the Accord internationally was evident in the ever increasing dimensions, which now matched almost exactly with the first generation Legend introduced in 1986.

For this fourth generation Accord, Honda made significant engineering design improvements. All Accords sold in North America came with a completely new all aluminium 2.2-liter 16-valve electronic fuel-injected engine standard, replacing the previous 2.0-liter 12-valve model from the past generation. Also noteworthy, all Accords equipped with automatic transmissions used an electronically controlled rear engine mount to reduce low frequency noise and vibration. The mount contained two fluid filled chambers separated by a computer controlled valve. At low engine speeds, fluid is routed through the valve damping vibration. Above 850 rpm, fluid is routed around the valve making the engine mount stiffer.

In the U.S., the LX-i and SE-i designations were dropped, being replaced with the DX, LX, and EX trim levels. The Canadian Accord trim levels varied slightly from the U.S. models with LX, EX and EX-R roughly corresponding to the American DX, LX, and EX, respectively. Fourth generation Japanese-assembled EXi Accords sold in Australia offered the same 4-wheel steering technology as was available optionally on the U.S. Honda Prelude, but was not included on the New Zealand-assembled versions. The four-wheel steering system was also available on the Accord's Japanese platform mate, called the Honda Ascot FTBi. U.S. Accord Coupes were available in the same DX, LX and EX trims as the U.S. Accord Sedan (LX, EX and EX-R in Canada).

A 125 horsepower (93 kW) 4-cylinder engine was offered in the DX and LX models (F22A1), while the 1990 and 1991 EX received a 130 hp (97 kW) version (F22A4). Cruise control was dropped from the DX sedan, with air conditioning remaining a dealer-installed option. The LX kept the same features as the previous generation including air conditioning, power windows, door locks, and mirrors. The 90-91 EX added 5 horsepower due to a different exhaust manifold design, slightly larger exhaust piping and a twin outlet muffler. 15-inch machined aluminum-alloy wheels, sunroof, upgraded upholstery, rear stabilizer bar and a high-power 4-speaker stereo cassette were standard on all EX models. Some models though rare were special ordered with an anti-lock braking system (at that time abbreviated as ALB, now all automakers refer to it as ABS). A redesigned manual transmission with a hydraulic clutch was standard equipment in all trims while an all-new electronically controlled 4-speed automatic transmission was optional for all models.

Because of tightening auto safety regulations from the NHTSA, all 1990 and 1991 Accords sold in the United States came equipped with motorized shoulder belts for front passengers to comply with passive restraint mandates. These semi-automatic restraints were a two component system; a motorized shoulder belt along with a non-integrated and manually operated seatbelt. The shoulder belts automatically raced around each window frame encircling both the driver and front seat passenger whenever the front door closed. The process reversed to release them when opened. The lap belts however, still required manual fastening.

In early 1990 Honda unveiled the Accord Wagon, manufactured at the Marysville, Ohio plant. The Ohio plant exported right-hand drive wagons and coupes to Europe and Japan, and in Europe the station wagon (estate) was called the "Aerodeck" (in reference to the 1985–1989 2-door vehicle). All station wagons sold outside the United States were afixed with a small badge on the "C" pillar denoting the vehicle was built at the Ohio facility. European and Japanese vehicles had options not available within the U.S. including automatic climate control systems, power seats and several other minor features. The Accord Wagons were available from November 1990, only in LX and EX trim in North America or just 2.2i in Japan. They had larger front brakes to compensate for the added weight and unlike other U.S. Accords, included a driver's side airbag as standard equipment. Other than a retractable tonneau cover in the rear cargo area and keyless entry on EX models, the wagons were equipped the same as their coupe and sedan counterparts.

Honda reintroduced the SE (previously SE-i) model for 1991. It returned to the lineup without the traditional Bose high powered audio system but with an AM/FM stereo cassette 4x20 watt EX audio system; leather-trimmed steering wheel, leather seats and door panels, a fuel-injected 140 hp (104 kW) engine, 4-speed automatic transmission, and ABS as standard equipment. For the first time, a manual transmission was not offered in the SE. Two colors were available: Solaris Silver Metallic with Graphite Black interior and Brittany Blue Metallic with Ivory interior. Unlike previous editions, the 1991 SE was not equipped with uniquely styled alloy wheels but instead carried the EX model wheels.

Accords received a minor facelift in 1991 for the 1992 model year. The SE trim was dropped again but left behind its 140 hp (104 kW) F22A6 engine for use in the EX models. This engine added 15 hp over the DX and LX trims and 10 hp over the 90-91 EX trim due to a further revised exhaust system. The system used the same EX-SE twin outlet muffler, a revised air intake tract, a revised camshaft and a revised intake manifold using IAB butterfly valves which open at 4600 rpm to increase air intake breathing at high rpm. It was similar in design to the 92-96 Prelude Si and VTEC models. For the 1992 and 1993 model years, the motorized shoulder belt system were replaced with a standard driver-side airbag and conventional shoulder/seatbelt arrangement for all but the center rear passenger. Anti-lock 4-wheel disc brakes became standard on the EX. The front and rear facias received a more rounded and updated look. Coupe and sedan models received a new grille, new headlights, clear parking lights, slightly thinner body side molding, updated wheel designs and for the first time, the EX coupe used wheels different from the EX sedan. The sedans received restyled shortened taillights with inverted amber turn signal and backup light positions. The coupe and wagon taillights though still resembled those from the 1990–1991 Accord. The coupe used the new revised inverted positioning of the signal and backup lights but the wagon taillights however remained the same as the 90-91 models. EX trim levels included a radio anti-theft function to deter stereo theft. A front driver's seat armrest was now standard on LX and EX models. Some dealer-installed accessories were dropped including the luggage rack, trunk-lip spoiler and cockpit cover. A gold finish kit was added. 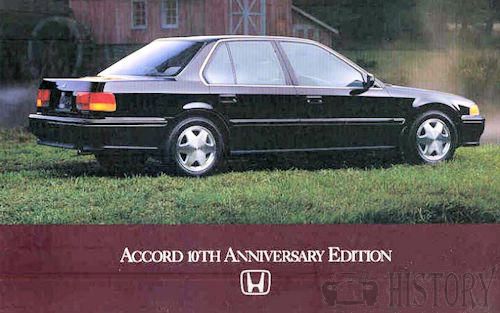 The SE returned in 1992 as both a sedan, and for the first time since the 1989 SE-i, as a coupe. The SE sedan featured standard dual front airbags; the first Accord to do so. An 8-button, 4-speaker Honda-Bose audio system, automatic transmission, leather trim, body colored bumper and body side moldings were standard. The SE coupe included a factory rear wing spoiler which differed slightly in design from the already available dealer installed accessory rear wing spoiler. In Canada, the SE came with heated front seats and heated side view mirrors. Both the sedan and coupe received distinctive 15-inch alloy wheels as well. All SE sedans during 1990-1991 and 1992-1993 were manufactured in Japan, while all SE coupes were produced in the U.S. The 1993 sedan was available in two colors: Cashmere Silver Metallic and Geneva Green Pearl, both with Ivory interior. The coupe was offered with two colors as well: Cashmere Silver Metallic and Atlantis Blue Pearl, both again with Ivory interior. Sadly, 1993 would be the swan song for the SE as an exclusive, high content, limited edition Accord model. Later generations would use a "Special Edition" designation rather than the previously used "SE" designation. These models were a combination of an Accord LX with several EX features similar to the 1993 10th Anniversary Edition LX.

At the end of the model life of the CB Accord, a "pillared hardtop" model called the Honda Ascot Innova was launched in Japan, based on the CB Accord chassis, but with a different, much more modern-styled body, taking cues from the 1992 Honda Prelude. 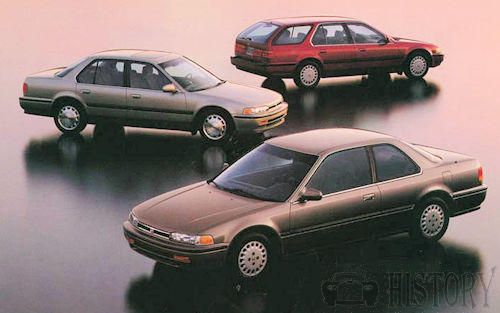