Automotive manufacturer of Buchloe , Germany From 1965 on. 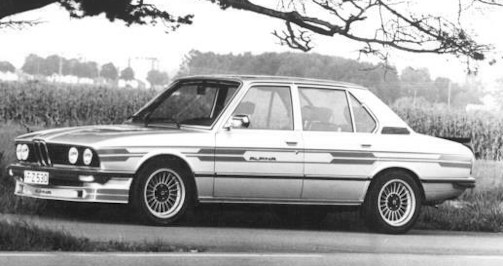 Alpina is a German car manufacturer based in Buchloe .Alpina has been active in BMW tuning and motorsport since the 1960s and in 1978 became a manufacturer of passenger cars based on products from BMW AG .

Since 1983, the company based in Buchloe in the Ostallgäu district has been registered as an official automobile manufacturer at the Federal Motor Transport Authority in Flensburg .The company was officially founded on January 1, 1965. The founder, Burkard Bovensiepen, who was born in 1936, is still in charge of the management today, to which his sons Andreas and Florian now also belong. Burkard Bovensiepen's father already ran a production company for office machines under the name Alpina .

The BMW automobiles that serve as the basis are equipped by Alpina with modified chassis, brakes, interior fittings, etc. The core of an Alpina automobile is the engine, which is based and modified on a BMW engine block and cylinder head .

From 1963 to 1977, Alpina was a vehicle tuner . BMW granted the Alpina vehicles the full factory warranty. The cooperation with BMW AG is still a decisive factor in the company's ability to occupy a market niche in the passenger car sector.

The starting point for the refinement of BMW automobiles was a tuning kit for the BMW 1500 of the " New Class ". The BMW 02 series soon formed the core of the tuning activities. But the 6-cylinder models (BMW E3, BMW E9, later BMW E12 and E21) were also popular tuning objects. The vehicles were converted either by Alpina or by BMW dealers; however, all parts were also available individually. For this reason, it is now difficult to understand when and where a renovation took place. The 4-cylinder versions ( BMW M10 ) all had an A in the designation, the small 6-cylinder versions a C ( BMW M20 ) and the large 6-cylinder versions a B ( BMW M30 ).

An Alpina A4S engine is a BMW 2002 tii 4-cylinder engine (M10) with a 300-degree camshaft, revised valve and crank mechanism, individual throttle system (mechanical Kugelfischer injection with one throttle valve per cylinder) and, Recognized by the S , with forged pistons and adapted hemispherical combustion chambers. Instead of the standard 96 kW achieved with a central throttle valve, depending on the camshaft, this resulted in around 129–147 kW (without forged pistons as Alpina A4 with 300-degree camshaft approx. 118 kW), and this with very good exhaust gas and consumption values.

Even the 118 kW version of the A4 was able to clearly outperform the BMW 2002 turbo, which was nominally more powerful with 125 kW, on the Nürburgring-Nordschleife in the car, engine and sport test , which shows the capabilities of the Alpina vehicles of that time.

This single throttle system developed by Alpina itself marked the transition from tuner to manufacturer. Since that time, the single throttle system has also adorned the Alpina logo on the left, together with the crankshaft on the right. Before that, the Alpina logo consisted of a double carburetor on the left and a camshaft on the right. Business had started with these parts at the time of the BMW 1500. The house colors were initially Colorado orange and matte black, later a bright green and royal blue .

At that time, all tuning levels were offered, from improved series vehicles to circuit racing vehicles, with which Alpina itself also participated very successfully in racing events.

In cooperation with BMW M , which still manufactures the M models, the BMW 3.0 CSL was developed as a homologation model for motorsport in the early 1970s .

In the 1960s and 1970s, Alpina successfully participated in international touring car racing. Professionals such as B. Niki Lauda and Derek Bell were driving the Alpina cars at this time. In 1987 and 1988 Alpina took part in the DTM . At the end of 2007, Alpina announced that it wanted to return to motorsport with a model based on the Alpina B6S. The car should comply with the FIA GT3 regulations and start mainly in the FIA GT3 European Championship and the ADAC GT Masters .  The Alpina B6 GT3 race car called debuted in 2009 and upgraded in 2011.

Probably the best-known representative from Alpina and also Burkard Bovensiepen's favorite car was the Alpina B10 Bi-Turbo, based on the BMW 535i E34, presented in 1989 . With a top speed of over 290 km / h, the vehicle was the fastest production sedan in the world. The output of 265 kW (360 PS) (the BMW 535i E34 had 155 kW / 211 PS) was achieved even at high outside temperatures. Paul Frère , well-known racing driver and journalist, wrote about the B10 Bi-Turbo in Road & Track magazine : "For me this is the car ... I think this is the best 4door in the world."

Externally, the Alpina models can often be recognized by the special Alpina wheels with 20 spokes, characteristic front and rear spoilers and the Alpina decorative stripes. These are contour adhesive strips in a special design that are attached around the vehicle or on the front spoiler, in a silver or gold finish, depending on the customer's requirements.