Windhoff Bahn- und Anlagentechnik GmbH is a German engineering company based in Rheine in Westphalia. It dates back to 1889 founded Rheiner Maschinenfabrik and the brothers Windhoff GmbH - Engine, Vehicle and Machine Factory from 1902 back. At the beginning of the 20th century, cars were also produced under the Windhoff brand . Today, the company operates in the fields of rail vehicles , railway technology and implements.

In 1902, the three brothers Ernst, Fritz and Hans Windhoff founded the Brothers Windhoff GmbH - engine, vehicle and machine factory . The aim of the company was the supply of equipment for motor vehicles. Initially, only engines , gearboxes and radiators were manufactured and u. a. presented in March 1903 at the International German Motor Show in Berlin . 1908, the company began under the brand name Windhoff own car production, which was maintained, depending on the source, until 1914 or 1918. In 1913, the unitedRheiner Maschinenfabrik and the engine and vehicle factory Gebr. Windhoff to Rheiner Maschinenfabrik Windhoff AG . In the world economic crisis of 1929, this company suffered heavy economic losses, but could be overcome. The plant in Rheine were completely destroyed on October 5, 1944 by a bomb attack. After the Second World War, Windhoff received major orders from the German Federal Railways for superstructure- processing machines. 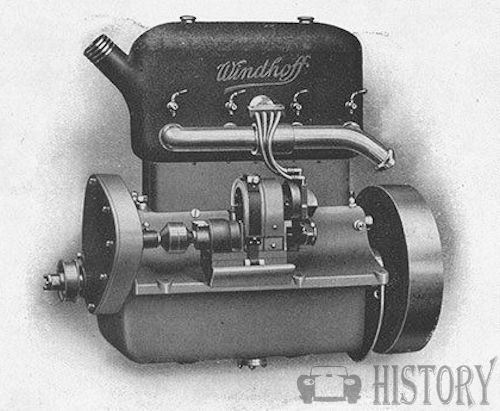 When it was introduced in 1904, the automobile program included four models powered by two four- and two six-cylinder engines. The smallest Windhoff had a displacement of 2012 cc, the largest 6125 cc. Already in 1911 appeared engines with top- controlled intake valves . Until 1914 various models were offered, including the four-cylinder models 6/18 hp 1.5 liter and 10/30 hp 2.6 liter. Especially the six-cylinder 15/40 hp 3.9 liters enjoyed an excellent reputation.

Windhoff automobiles were quality products and also participated in motorsport events such as the Prinz Heinrich Ride .