Automotive manufacturer of Oberndorf am Neckar , Berlin ,Germany from 1925 to 1929. 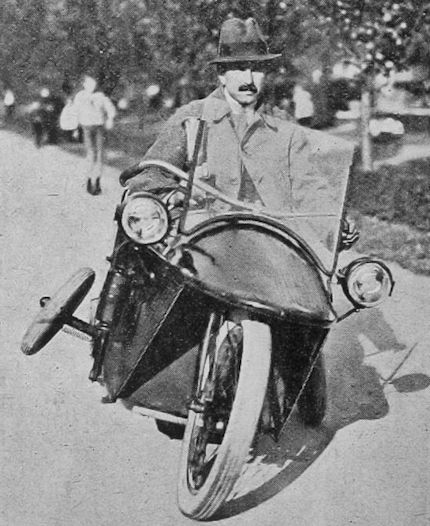 Gustav Winkler was a German manufacturer of automobiles from Oberndorf am Neckar , later Berlin in the 1920s .

The Berlin designer Gustav Winkler developed in 1920 a Einspurwagen . The gun manufacturer Mauser-Werke AG took over the design, developed it further, and brought it in 1921 as a Mauser 2/6-hp single-track car on the market. When Mauser ceased production in 1926  , Gustav Winkler acquired the remainder of the parts, developed the vehicle further, and marketed it as an Winkler single-track car . The production took place initially in a part of the Mauser factory in Oberndorf am Neckar, later in Berlin. 1929 ended the production.

It was a car  on two wheels, one in the front, one in the back, and with two lateral support wheels that were folded up while driving. The engine was located under the back seat and drove over a chain to the rear wheel. The vehicle offered space for two people in a row.

The water-cooled single-cylinder engine with 510 cc capacity was a side -mounted T-head engine and made 6.0 hp at 3200 / min. This was installed in the first 200 copies. The crankshaft was roller and sliding bearings, the connecting rod was roller bearings, the three-speed gearbox and the steel disc clutch were installed in the motor housing. The engine lubrication was done with a pressure pump. The radiator of the thermosiphon cooling is installed at the front of the car. The engine is started with a kickstarter. Another engine, which was also built by Mauser, had hanging valves and 573 cc displacement.

The box frame was made of sheet steel and provided with forks for the front and rear wheels. These were equipped with coil springs and airbags. The mechanical brakes acted on the rear wheel, with the handbrake acting as a band brake on the outside of the brake drum and the foot brake as an internal shoe brake. The wheels had the dimension 710 × 90, the retractable support wheels had a diameter of 15 inches. The vehicle, with a wheelbase of 2230 mm, was 3.0 m long, 1.20 m wide and 1.10 m high. The empty weight was 295 kg, the payload 200 kg. (Different dimensions are indicated in the different sources). The spoke wheels are interchangeable with each other, the support wheels designed as disc wheels were raised with an internal lever while driving. The body is made of synthetic leather covered plywood and has a door on the left. For maintenance work, the tailgate could be completely removed. The wide across the car windshield was attached to the steering linkage.[5]

In 1926, Winkler took over the production of the single-track wagon and revised the design. The wheelbase was shortened by twelve cm and lowered the vehicle by ten cm. This resulted in improved driving characteristics. The drive was a water-cooled single-cylinder engine with 510 cc and 10 hp installed. There were also vehicles with an air-cooled two-cylinder boxer engine from BMW with a power of 6 hp.

There are different specifications for the engine. A source called a developed by Mauser single-cylinder engine having 85 mm bore , 90 mm stroke , 510 cc displacement and 10 PS , but does not specify whether Winkler continued to use this engine.  A senior source indicates that Winkler from 1927 a air-cooled two-cylinder - piston engine used with 493 cc capacity and 6 hp.  An even older source mentions a single-cylinder engine with OHV valve control, also developed by Mauser, 90 mm bore, 90 mm stroke, 573 cc displacement and 6 hp power, the Mauser finally used; But also does not indicate whether Winkler used this engine.  A fourth source is called a single-cylinder engine of BMW 500 cc and 10 hp.