The Ford GT40 is a racing car that won the 24 Hours of Le Mans for four consecutive years starting in 1966. This was named after the class Gran Turismo. A total of 134 vehicles (racing and road cars) were built from 1964 to 1968.

In 1962, Henry Ford II wanted to get his company back on international racing, around the then increasingly popular long-distance races in Le Mans and Indianapolis to use as an advertisement for his cars. At that time, the Europeans dominated this field, not least because the American automakers had voluntarily decided in 1957 to withdraw from motor racing. This circumstance had an unfavourable effect on the image of the brands, since a successful use in racing was regarded as an indication of engineering and reliability. Just these values ​​Ford wanted to show with the participation (and the planned success) in the race of Le Mans.

To be able to have as fast as possible cars, Henry Ford II wanted to buy Ferrari. The negotiations with Enzo Ferrari started well he wanted to direct the future racing department of "Ford Ferrari", which should then also be called Ferrari Ford, declined by Ford. In May 1963, the purchase failed definitively, as Enzo Ferrari announced that Ferrari was no longer for sale. 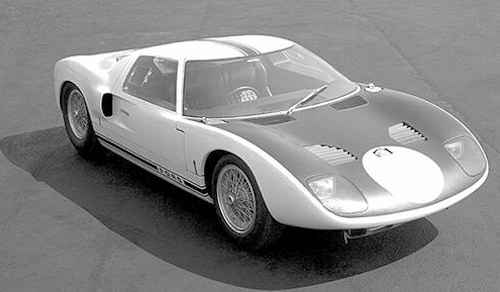 The construction of the GT40 can therefore be seen as a retribution: Ford decided to set up its own sports program to beat Ferrari at the 24 Hours of Le Mans. He assured himself of the help of Eric Broadley , who had already built the Lola Mk6 GT, a prototype with a V8 engine from Ford in his own company Lola and acquired from him two chassis. Ford founded Ford Advanced Vehicles Ltd and built a development team in Slough, England. John Wyer (formerly Aston Martin) was hired as head. The result was the 1964 GT40.In 1965, the decision was made to sell a limited number of units. The Mark 1 was sold for race, the Mark 3 should be sold if necessary to some wealthy prospects.

Production began in early 1965 in Slough; Almost all models were manufactured there over the next three years. Only a handful of copies were sold with valid street legal. Disadvantages of the GT40 were the weak ventilation and the poor all-round visibility. A total of 124 pieces were built, including twelve prototypes and ten Mk 4. Ford itself speaks of 94 production cars, of which seven Mk 3 and 31 Mk 1 were converted for the road.

Under the GfK body was a steel frame. The chassis consisted of double wishbones with coil springs on all wheels, rack and pinion steering and disc brakes. In the prototypes worked a 4.2-liter V8 from Ford USA. Engine block and cylinder heads were made of aluminium, the engine had dry sump lubrication and four Weber 48-IDA carburettors. This made 350 bhp (261 kW) at 7000 rpm. The maximum torque of 275 lbft (373 Nm) could be delivered at 5600rpm.

The unsynchronized four-speed transmission, which sat in a common housing with the differential, provided Colotti. This combination did not prove successful and was replaced in the Mark 2 by a gearbox from Ford and a 4.7-liter engine with 485 bhp (361 kW) at 6200 rpm and 475 lbft (644 Nm) at 4000 rpm. The Mark III Road versions, however, had 4.7-liter engines with a Holley quadruple carburettor and ZF transmission. They made 306 bhp (228 kW).

Ford was not satisfied with the performance of the Mark 1. The Mk 2 with the new 7-liter engine should finally win in the 1966 Le Mans 24 Hours. Chris Amon and Bruce McLaren celebrated the long-awaited victory over Ferrari. Also, the GT40 won in 1967 The Mark 4 was the last of the GT40 series before Ford finally withdrew from racing. It was an outstanding sports-racing model with a reliable engine. Dan Gurney and A. J. Foyt drove one in the 1967 Le Mansto gain Ford its second victory at average speed of 218km/h (135.5mph). This had a new body for Le Mans. Later versions also won in 1968 and 1969. The race cars were able to reach a top speed of about 320 km / h.