The 1969 model was built on a new platform with a 121-inch (3,100 mm) wheelbase. It was the end for the 427 and 428 engines. Replacing the FE series-based 427 and 428 engines was the new 429 cu in (7.0 L) "ThunderJet" that was introduced in the 1968 Ford Thunderbird; it was part of the new Ford 385 engine series. Power, at 360 hp (270 kW) for the dual-exhaust 4-barrel version, was higher than the 428's 345 hp (257 kW)and lower than the racing-bred 427's final rating of 390 hp (290 kW); there was also a single-exhaust 2-barrel version with 320 hp (240 kW) available. The dashboard was built as a pod around the driver rather than traditionally extending across both sides. The XL and Galaxie 500 Sportsroof had rear sail panels to simulate a fastback roofline. The rear trim panel below the tail lights was used to distinguish the different trim levels. The Country Squire was, perhaps, the pinnacle of design for that wagon with the concealed headlights.

Galaxies for model year 1970 were pretty much the same as the 1969 models, except for minor trim changes. A new Government-required ignition lock was located on the right side of the steering column. Model year 1970 was the last year for the XL, but Galaxie 500 hardtop coupes were also available in both formal-roof and SportsRoof body styles.

A complete redesign was offered for 1971. This included a horizontal wrap around front bumper with a massive vertical center section much in the vein of concurrent Pontiacs. Taillights lost the traditional "rocket" exhaust theme in favor of horizontal lights and trimmed center section. Rooflines were squared off and had a "formal" air. The XL was dropped, as were concealed headlight covers for the LTD. The convertible was moved to the LTD series in 1971 and lasted through 1972.

Models for 1972 were similar but the lower bumper continued across the center grille section and the rear bumper was enlarged with inset taillamps. This was also the final year for the 240 cu in (3.9 L) six-cylinder engine and three-speed manual transmission (which was available only with the six-cylinder engine); all V8-powered Galaxies had SelectShift automatic transmission standard.

The 1973 model was marginally shorter than previous models, but had a heavier, bulker appearance. Three towing packages were optional, each with increasing towing capacity. For law men, the Police Interceptor package was available. All full-sized Fords came with a V8-engine and SelectShift transmission.

The 1974 model year was essentially a repeat of 1973, but it was the last year for the Galaxie 500 name. Ford elected to consolidate most of its full-size models under the popular LTD name for 1975, while reserving the base-model Custom 500 (which was below the Galaxie 500) nameplate for fleet buyers and private customers who insisted on the lowest-priced full-sized model possible. Power front disc brakes were standard.

The LTD stayed on as the top full-size model. 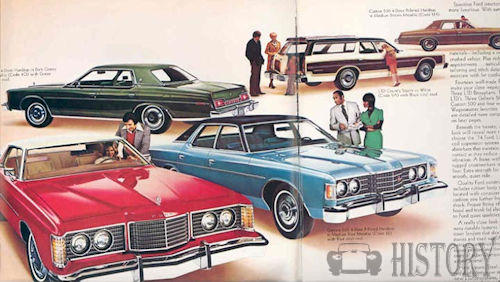 A copper-plated 500 sedan, 007 is sitting in where he meets with Felix where the CIA agents lose Tiffany.