The most famous version of Cortina was the Cortina Lotus from the 1960s. Ford had commissioned Colin Chapman.

Models of the Lotus Cortina were available as two-door saloons with a contrasting green side flash along each side with front quarter bumpers . Lotus Cortinas had a one-of-a-kind 1557 cc twin-cam Lotus engine based on the Kent OHV engine. Some body panels for the doors, bonnet, and boot were made of aluminium. It also had a unique A-frame rear suspension for a short period, but this proved to be weak, and the vehicle was quickly returned to the conventional Cortina semi-elliptic rear end. Inside a A wood-rimmed steering wheel gauge upgrades to tachometer, speedometer, oil pressure, water temperature. was fitted.

Ford had commissioned Colin Chapman , owner of Lotus Cars , to build a Cortina for motorsport. The Cortina Lotus engine had a Harry Mundy designed alloy cylinder head with dual overhead camshafts on the block of the normal Kent engine. This engine was also used in the Lotus 23 , Lotus Seven and the Lotus Elan . With 2 Weber DCOE 18 horizontal carburettors. 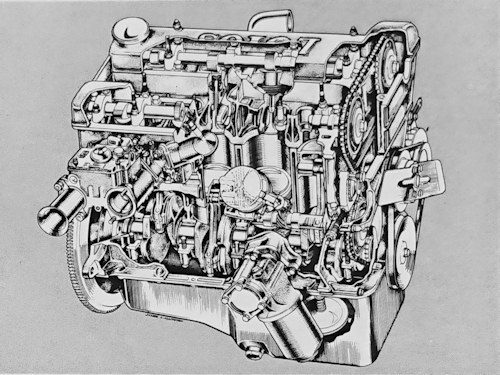 The outer skin of the doors and hood of the Cortina Lotus is made of aluminum instead of steel. The chassis of the Lotus Cortina has also been modified. While the rear axle of the series models was attached to leaf springs, the Lotus Cortina had a better guided rear axle with trailing arms, a bottom reaction triangle articulated on the differential housing and coil springs. In addition, the differential housing was made of aluminum to reduce the unsprung mass of the rigid rear axle. The axle tubes were still made of steel. This design proved to be the Lotus Cortina's weak point, as the aluminum housing of the differential was not sufficiently rigid and this led to numerous differential defects, especially in sports use. For this reason, during the "active" period of this sports model, most specimens were converted back to the rear axle of the normal models, which caused fewer problems.Front suspension with telescopic damper struts, lower wishbones, anti-roll bar at the rear rigid Axle, trailing radius arms, wide-based lower A-bracket, coil springs, telescopic dampers fitted.

There were two main variations of the Mark 1. The Mark 1a possessed elliptical front side-lights, whereas the Mark 1b had a re-designed front grille incorporating the more rectangular side-light and indicator units.