The fifth generation Mondeo, also known as the 2013 Ford Fusion, was unveiled at the 2012 North American International Auto Show.

With a design team lead by Ford of Europe designer Chris Hamilton based in Detroit for the design and global launch phase, the new model takes many styling cues from the European Ford Evos concept unveiled in 2011 at the Frankfurt Motor Show, and the previous generation Ford Mondeo. Like the newest redesigns of the Focus and Fiesta before it, the new Mondeo is set on a global platform that is shared with the now identical Fusion, which will be sold in the U.S.

At the Detroit Motor Show in January 2012, Ford presented the new Ford Fusion , which is largely identical to the Mondeo '13. Both models were developed in spring 2012 by the Vercarmodel Saro design studio . The Fusion has been available in North and South America since fall 2012 , with North America only being offered as a notchback sedan. Since its launch it is with a petrol engine and hybrid drive available, the plug-in hybrid Fusion Energi followed 2013. Produced is the merger initially exclusively in the Mexican Ford plant Hermosillo , and later inFlat Rock (Michigan) .

The fifth generation Mondeo is again available with a hatchback or notchback and as a station wagon. As a limousine , it now has coupé-like trains. The notchback variant is only offered as a hybrid, Vignale or Vignale hybrid. In contrast to its predecessor, this Mondeo was originally intended to be marketed worldwide from autumn 2013. The tournament was specially developed for Europe and should only be produced and offered here. Due to the closure of the Belgian Ford plant in Genk , the market launch was postponed by around a year. 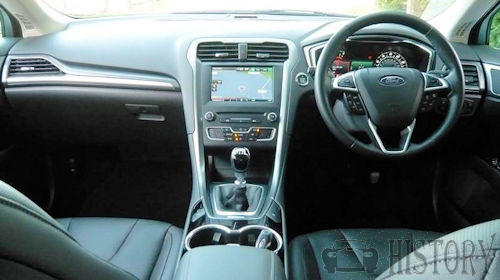 The range removes the former V6 3.0 engine, and on launch will have a complete range of Ford EcoBoost engines.All engines are offered with a six-speed manual transmission or a six- speed automatic transmission . For the first time since the start of the model series, all-wheel drive will also be available again , which can also be combined with the diesel engines and automatic transmissions. The optionally available LED headlights (Ford Dynamic LED) are also new . As further innovations are assistance systems such as lane departure warning , adaptive cruise control , parking assistant and a Blind Spot Assist announced. 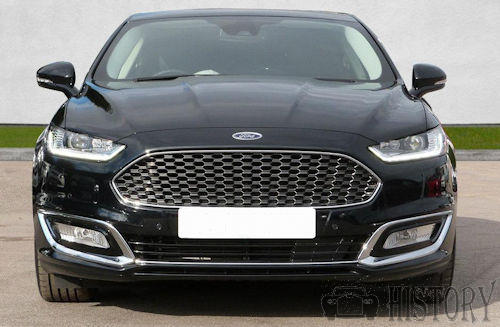 From Autumn 2013, there will be added a three-cylinder 123 bhp Ecoboost, to produce just 125g/km of CO2 emissions.For the market launch on February 7, 2015 stand next to the EcoBoost- Gasoline engines with 1.5 and 2.0 liters displacement, diesel engines with 1.6 and 2.0 liters to choose from. There is also the Mondeo as a full hybrid version with a 2.0-liter gasoline engine which, together with the electric motor, produces 140 kW. Later the car will also be available as a plug-in hybrid Mondeo Energi . Both hybrid versions should be able to drive purely electrically up to a speed of 100 km / h.

In 2014/2015 a plug-in hybrid badged as an Energi will be added, and powered by a lithium-ion battery pack and 185 bhp Atkinson cycle 2.0-litre petrol engine. 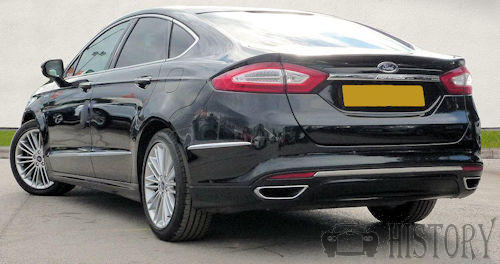