The fourth generation Mondeo (codenamed CD345) was officially unveiled in 5-door production form in late 2006. Based on the EUCD platform developed with Volvo, the platform is the same used in the new large MPVs Galaxy and S-MAX, but not the North American Ford Fusion or the Mazda Atenza in Japan. It will also possibly be used for several Volvos.

The Mk IV Ford Mondeo was released in May 2007 in the UK where it is currently available in five different trim levels: Edge, Zetec, Ghia, Titanium and Titanium X. In February 2008, Ford announced that in some European markets the Mondeo will be made available with a new Titanium S series trim. This model aims to add an even more 'sporty character' than the current Titanium series. In March 2008, a new 2.2 175 PS (128.7 kW; 172.6 bhp) TDCi common-rail diesel engine will be available on Mondeo providing acceleration to 0-60 mph in 8.4 seconds on the saloon and fuel consumption of returning 45.6 mpg combined (this engine was replaced with the 2.0l TDCi 163 returning a combined 53.3mpg imp gallons, with a marginal loss of performance). Also available in March 2008 will be Mondeo ECOnetic based on the Zetec series. 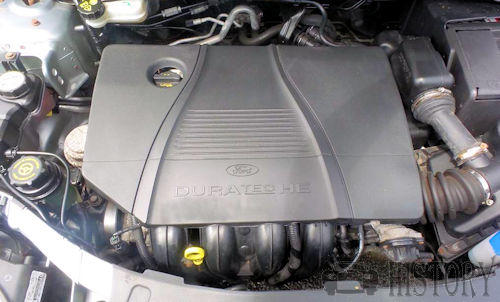 Although the fourth production model, after the Mk III Galaxy, S-Max and C-Max, to adopt Ford's current 'kinetic' design language, the Mondeo's design theme was firstshown at the 2005 Frankfurt Motor Show, which gave an indication to the look of the Mk IV Mondeo. The new car, in estate bodystyle, was pre-launched in 'concept' form at the Paris Motor Show on 30 September 2006.

The new platform allowed for the use of Volvo's five-cylinder petrol engine, already featured in the Focus ST and S-Max. Also, Ford dropped the two V6 engines for this platform. The petrol engines include a 1.6-litre with two power outputs (110 PS & 125 PS), the 2.0-litre (145 PS), 2.3-litre (161 PS) for 6-speed automatic models only, and a 2.5-litre five-cylinder turbo with 220 PS (162 kW; 217 hp). It was initially believed performance models may have featured engines from Jaguar and Volvo,but following Tata's purchase of Jaguar/Land Rover, performance variants are more likely to feature other 'in-house' Ford engines such as an uprated 2.5l T5 petrol(as found in the Focus RS) or Volvo's D5 diesel and Mazda's 2.3l petrol

The new Mondeo uses the new electro-hydraulic steering system, first used on the C-Max, that sharpens the steering response, and helps to save fuel Inside, the Mk IV features Ford's Human-Machine Interface (HMI) first seen on the Galaxy and S-Max whilst an enhanced instrument cluster featuring a 5-inch (130 mm) LCD for displaying trip computer and satellite navigation is available as an option on all models. Like the facelift Mk III, base specification models have a manual heating/air-conditioning system in place of the climate control system. Also new on the Mk IV is the option of keyless starting of the engine via a "Ford Power" button on the dashboard. 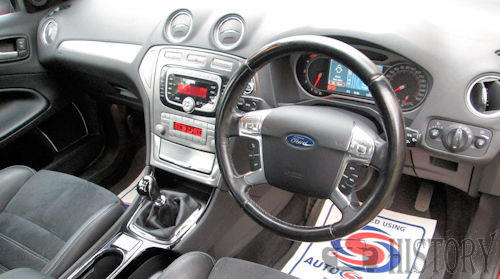 A product placement promotional initiative made the Mk IV Mondeo James Bond's car for one incidental scene in Casino Royale, introducing the new model to global audiences in November 2006 on the launch day of the movie.

As with the previous model, the Mk IV Mondeo is not marketed in the US or Canada because Ford currently sells the same-class Fusion, which was launched in 2005. The new Mondeo is not sold currently in Venezuela, Brazil or Colombia because the Fusion is sold locally, nor is it offered in Mexico, although the Mk III model was popular there. It is, however, sold in Argentina. In Middle East and Central America, Ford Mondeo is sold along with the Ford Fusion.

The 2007 Mondeo marked the return to the Australian market after a six-year absence, due to a resurgence in popularity of medium-sized cars in the last few years. This is in no small part the result of high fuel prices making people reconsider purchasing large cars like the Ford Falcon. Marketing for the Mondeo in Australia has so far focused on the theme that the Mondeo looks good but offers even more than style, with television commercials showing silly quotes from celebrities such as Britney Spears ("I've been to lots of overseas places... like Canada") interspersed with scenes of the vehicle and finally the slogan "more than just good looks".

The Australian spec Mondeo TDCi took out the award for Australia's Best Cars "Best Mid-Size Car over $28,000" for 2007 and was runner up for the Wheels Magazine "Car of the Year" award.

Initial sales have been good in Australia, despite supply constraints from Europe (or possibly Thailand, where many Australian market world vehicles were built) limiting the car's success there. At this stage, the Mondeo is sold as a sedan (discontinued when the wagon was launched), hatch and wagon on the Australian market, in both diesel and petrol engines and in four trim levels; LX, TDCi, Zetec and XR5T. In June 2009, Ford Australia announced that the 'Titanium' badge would also be used on Australian spec Mondeos, along with the release of the Mk IV Mondeo wagon. Only the 2.3L petrol, 2.5L petrol and 2.0L diesel engines are offered there, the 2.5 being the only model available with a manual transmission. The ECOnetic Mondeo is also now being considered for the Australian market.

The Mk IV Mondeo was named one of two cars for the 2007 "Car of the Year" award by Top Gear on 23 December 2007 (the other being the Subaru Legacy Outback).

By the end of 2010 a facelifted Mk IV Mondeo was introduced with changes such as the new ecoboost engines and LED daytime running lights. The final changes was shown at the 2010 Moscow International Motor Show. The front and rear of the car have minor changes, the biggest being the new Kinetic Design. The interior is improved with a better use of materials. The Ghia trim line has been totally removed from UK markets, so the Titanium takes over as the top of the range models, along with the saloon. The new econetic has higher mpg and further reduced CO2 emissions thanks to Stop-Start technology. Also introduced is an improved version of the 2.2L PSA diesel engine, delivering a healthy 200PS. This facelift is prompted by similar revisions to the S-MAX which was launched in summer 2010. 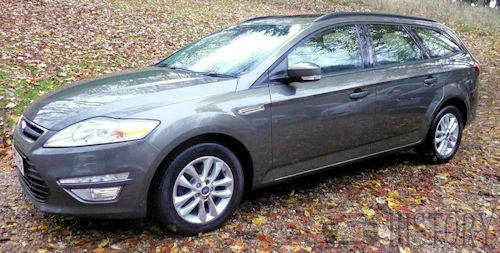 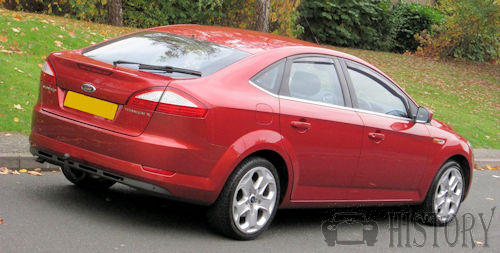 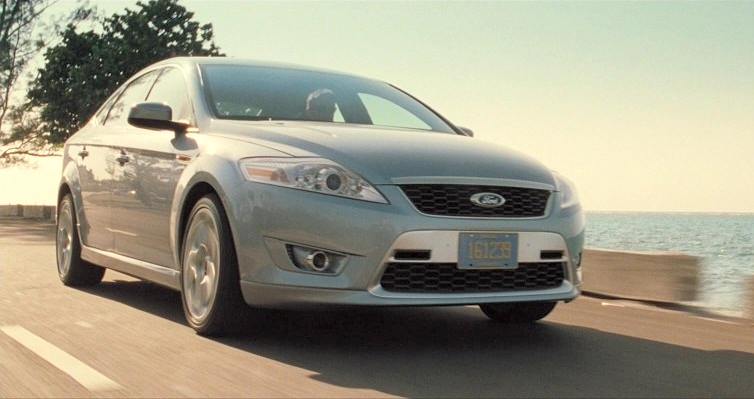 The Ford Mondeo in Casino Royale was a Pre-Production ST 2.5 MkIV