The model used the chassis of the Mark III car but most components were heavily revised, including a new suspension system, which gave the Fiesta one of the best handling abilities in its class.

The model featured a range of new Zetec-SE engines, available in 1.25 L and 1.4 L forms, the 1.8 diesel engine was slightly modified for the Mark IV, now marketed as the "Endura DE". Lower specification models remained available with what would be the final edition of the Kent 1.3 L OHV engine, now known as Endura-E. As well as the major changes to the chassis, the Mark IV also benefited from a new interior and exterior styling, including a soft painted instrument panel for the first year of production, albeit maintaining a similar dimensions to the Mark III. The RS1800 and RS Turbo models were not carried over to the updated Fiesta range.

The Mark IV Fiesta shared a production line and design with the Mazda 121, which sold in much lower volumes and was not produced for the British market after 1999.

In 1997, the Mark IV was introduced into South Africa. This is the first time the Fiesta entered the South African vehicle market. Only one engine was available, the 1.3 L Endura E. It subsequently won the South African Car of the Year award. The 1.3 L engine was replaced with the 1.4 L PTE (CVH) engine in 1999.

The Mark IV was not sold in North America.

The German-built Ford Puma was based on the Mark IV, sharing its underpinnings. For this reason the 1.7 VCT engine from the Ford Puma has become an extremely popular engine swap into the Mark IV and Mark IV facelift Fiesta. This gives the popular hatchback an extra 100 cc over the previous largest engine size available, variable cam timing and better ratio gearbox while still retaining a factory finish as all components are a direct swap.

As an exercise in badge engineering, the Mazda 121 and Ford Fiesta were built on the same production lines and used almost all the same parts. In the JD Power reliability surveys at the time, the Mazda was reported to be significantly more reliable and attracted higher levels of customer satisfaction. 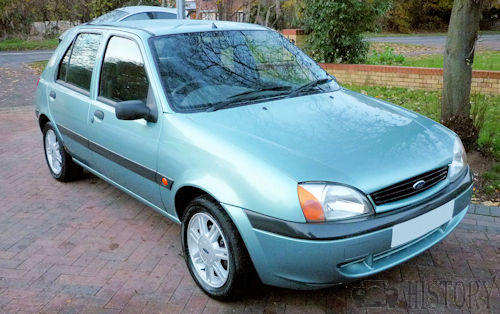 In 1999, the Fiesta received a minor facelift aimed at giving the car a New Edge look, with a Focus-inspired face, new bumpers and wheel designs. Facelift known as Mark V in United Kingdom and elsewhere.

Other changes include 1.6i 16V Zetec engine, fitted to the new Zetec S model, and later available in Ghia and Freestyle trims. New features such as side airbags and (after launch) the reintroduction of leather trim.

An environmentally friendly E-Diesel model for 2001, with CO2 emissions of 120 g/km. The Lynx 1.8 TDDi engine (also introduced after launch).

The fourth generation faceliftwas the last generation of Fiesta to be built at Dagenham in England, and was indeed the final Ford model to be built at Dagenham following the closure of the car assembly plant in 2002. The internal code name of this Fiesta was still BE91. The UK trim level line-up consisted of: 1999, Encore, Finesse, Zetec, LX, Ghia; 2000, Zetec S added; 2001, E-Diesel added at bottom of range, Flight and Freestyle respectively replace Finesse and Zetec. 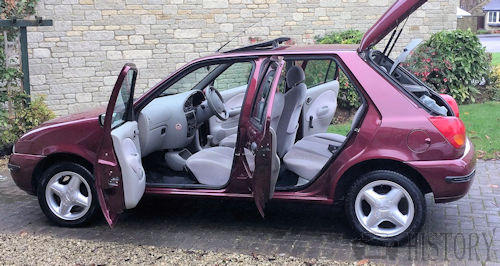 In South Africa, the facelift used the Port Elizabeth-built 1.3 L and 1.6 L Rocam engines, instead of the European Sigma 16-valve engines. This model formed the basis of the Ford Ikon (code name C195), which is a four-door saloon designed for India, where Ford was then producing cars in a joint venture with Mahindra. The Ikon was also introduced in other developing countries, such as Brazil (where it is known as the Fiesta Sedan), South Africa, Mexico and China, where saloons are preferred to hatchbacks. They are extremely reliable, and became one of Ford's successes. There were also four utility variants, the simplest being the "Fiesta Van" which was a three-door hatchback with the rear quarter windows blanked over and the rear seat omitted (in other words, a sedan delivery). Another van with a boxy rear body and stretched wheelbase used the Courier nameplate and formed the basis of two coupe utility models, one with the short doors of the 5-door hatchback and small quarterlights in the style of larger extended cab pick-ups, made in South Africa; and another with the 3-door's longer doors and no quarter windows, made in Brazil.

The Fiesta was still Britain's best-selling supermini in 2001, by which time it was making use of a design over a decade old (though heavily updated visually and mechanically). In three-door form, it was sold alongside the fifth generation Fiesta from April to December 2002.

The Zetec S was the highest Fiesta trim, and although its 1.6 L 16v Sigma engine was available in other Fiestas (such as the Freestyle) the Zetec S pushed out 101 bhp (75 kW; 102 PS), and had major alterations to the suspension, with stiffer anti-roll bars and uprated brakes shared with the Puma.

The fifth generation facelift Zetec S has a sizeable following, with many websites dedicated to the vehicle. There is also a tuning culture devoted to this model, with reputable companies such as Milltek Sport and Shawspeed developing performance parts solely for the Sigma engine. 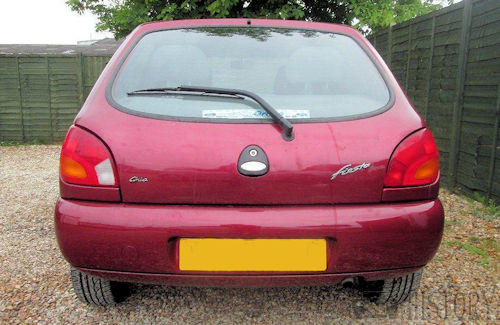