On 1 April 2002, the all new fifth-generation car was unveiled. Of this Fiesta Mark V, most engines were carried over from the previous Fiesta, but renamed "Duratec", as the "Zetec" name was now solely used for sportier models. The previous push-rod 1.3 L engine was initially available in the UK, but this was quickly replaced with a Rocam 1.3 L, both under the name Duratec 8v Trim levels available initially were Finesse, LX, Zetec and Ghia, with limited edition variants soon following. The fifth generation was also the first Fiesta to feature the Anti-lock Braking System and passenger airbags as standard. The fifth generation was known as Mark VI in United Kingdom and elsewhere due to the fourth generation facelift being commonly referred to as the Mark V. This generation became the best-selling Ford Fiesta generation to date.

This was also the first Fiesta to be sold in Asia and Australasia (all 1.6 L LX 3dr/5dr, Zetec 3dr, Ghia 5dr), replacing the Kia-based Festiva. In Brazil and Argentina, a Fiesta saloon version was introduced in late 2004. A similar Fiesta saloon model, with a different front end, was released in India in late 2005. This Fiesta generation was ergonomically and mechanically more advanced than any previous generation. The 2005 facelift came with an even improved exterior.

In Brazil, the engine options also include 1.0 L 8v Flex and 1.6 L 8v Flex engines called Rocam, that runs on ethanol, petrol or any mixture of both. The internal codename of this model is B256 (5-door) and B257 (3-door). In other Mercosur countries the Fiesta features a 1.6 L 98 bhp (73 kW) SOHC Zetec engine has a standard with the choice of either a 4-speed automatic or 5-speed manual transmission. There is also a 1.4 L 68 bhp (51 kW) diesel engine available. For the Colombian market a 1.0 L 8v Rocam engine was sold with a supercharger, producing 96 bhp (72 kW). This was discontinued on 2009 and replaced by the Mark VI imported from Mexico. In Chile the model is imported from Mexico because the Mercosur model does not meet the requirements of the country.

The South American market Fiesta was facelifted in early 2007 as a 2008 model, with new rectangular headlights and grille. And again, in early 2010 the Fiesta was facelifted as a 2011 model, with new headlights and grille, very similar to those on the mark VI Fiesta available in other markets around the world, but keeping all other features nearly the same as the previous model. Its name varies from country to country, called "Fiesta One" in Argentina, "Fiesta Move" in Venezuela, and "Fiesta Rocam" in Brazil.

In the Indian market Ford produced the Ford Ikon and fifth generation Fiesta in parallel for the saloon market until April 2011. Production of the Ford Ikon was discontinued when the Bharat IV emission requirements came into effect for metropolitan areas.[ Ford then announced its intent to launch the Fiesta Mark VI at a lower price and new features, including dual airbags, bringing the Fiesta in line with competitors such as the Honda City, Suzuki SX4, Volkswagen Vento and Hyundai Verna. In July, Ford replaced the fifth generation Fiesta with the sixth generate Fiesta, marketed in India as the Ford Fiesta 2011

The Fiesta ST/XR4 was the performance model of this Fiesta. It includes a 2.0 L Duratec petrol engine rated at 150 PS (110 kW; 150 bhp) in standard form, with a top speed of 129 mph (208 km/h). The Fiesta ST also features 17 in (43 cm) alloy wheels, different front and rear bumpers, side skirts, body colour handles and bump strips, partial leather seats and a ST logo on the front seat backs and on the steering wheel.

In Australia, the Fiesta ST was sold as the Fiesta XR4. To stay in line with all sports model Fords sold in Australia it received the 'XR' badging, instead of the 'ST' badging used in Europe.

The vehicle was unveiled at the 2004 Geneva Motor Show.

The car was unveiled at the Birmingham Auto Show.

This is a concept model based on the 2002 Fiesta RallyeConcept. It includes many of the RallyeConcept Fiesta features such as the cooling vents in the front bumper, deep side rockers, white ceramic-coated brake calipers and exhaust tips, and a large rear spoiler. It also includes 18-inch alloy wheels with low-profile tyres, extended wheel arches, and lowered and stiffened suspension. The engine is rated at over 180 bhp (130 kW) 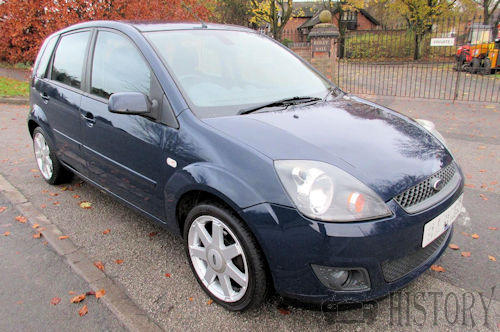 In November 2005, a revised version of the fifth generation Fiesta went on sale, also known as the Mk 5 facelift. A number of cosmetic changes were introduced: front and rear lights featured new detailing, and bumpers, side mouldings and door mirrors were altered. A bright new colour palette was introduced.

The changes had immediate effects on sales. After years being outsold by Vauxhall's Corsa, among others, in February 2006 Ford announced sales in the preceding month were up 25% on January 2005 for the previous model. Furthermore, the Fiesta captured the title of Britain's most popular supermini in both 2006 and 2007, for the first time since 2001. 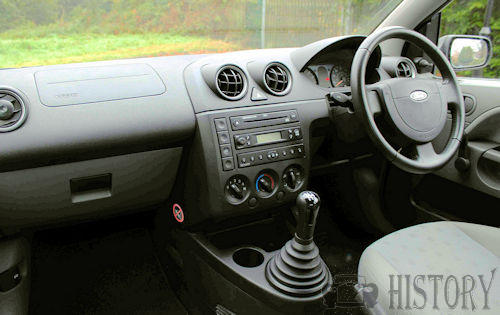 The car went on sale in the UK on March 2007 for £12,595. Despite the name, the Ford Fiesta was 31 years old when the anniversary model was released. 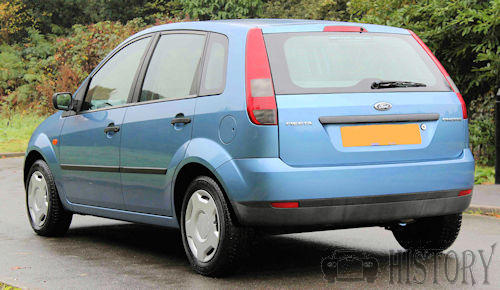