The Ford Pinto engine was the unofficial but generic nickname for a four-cylinder internal combustion enginebuilt by Ford Europe.

Introduced by Ford in 1970, the Pinto was one of the first production engines to carry the cam on top of the head, driven by a toothed belt.

In Ford sales literature, it was referred to as the EAO or OHC engine and because it was designed to the metric system, it was sometimes called the "metric engine". The internal Ford codename for the unit was the T88-series engine. European Ford service literature refers to it as the Taunus In-Line engine (hence the TL codenames) and the Lima In-Line (LL)

It was used in many European Ford cars and was exported to the United States to be used in the Ford Pinto, a successful subcompact car of the 1970s, hence the name which is used most often for the unit. In Britain, it is commonly used in many kit cars and hot rods, especially in the 2 litre size. 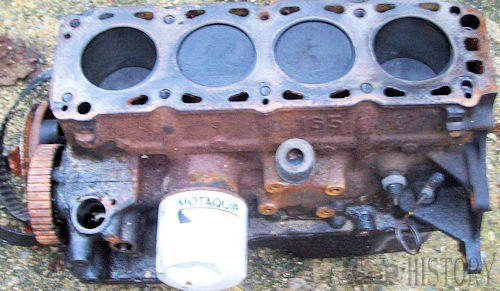 In Europe, the Pinto OHC was introduced in 1970 to replace the Essex V4 used in the Corsair as that range was subsumed into the Mk3 Cortina and Taunus V4 for the German Fords range (mainly the new Taunus TC). It was the first Ford engine to feature a belt-driven overhead camshaft (thus the name). The Pinto was manufactured in Cologne and was naturally fitted to many German cars such as the Taunus, including the 1293cc version also fitted to early Sierras.

The Pinto engine was available in five displacements: 1.3 L (1,294 cc), earlier 1.6 L (1,593 cc), later 1.6 L (1,598 cc), 1.8 L (1,796 cc) and the 2.0 L (1,993 cc). Due to emission requirements, it was phased out towards the end of the 1980s to be replaced by the CVH engine and DOHC engine, the latter being (contrary to popular belief) a completely new design and not a twin-cam development of the Pinto unit. The 16-valve version of the Ford DOHC unit is still used on the Ford Transit. The only DOHC direct derivative of Pinto engine is the Cosworth YB 16-valve engine, powering Ford Sierra and Ford Escort RS Cosworth variants.

The fuel was supplied by the Motorcraft single-barrel (1V) carburettor in the early models (until April 1979), and Motorcraft VV ("variable venturi") carburetor for the vehicles built after April 1979.

The HC version of the early 1.6 L had the same bore and stroke as the LC version, but the compression ratio was higher (9.2:1), allowing it to produce 53 kW (71 hp) of power and 118 N·m (87 ft·lbf) of torque. It used the same carburetor models as the low compression version (Motorcraft 1V and Motorcraft VV).

From the beginning of the production run, the 1.6 L had a special, 'sporty' version which featured: 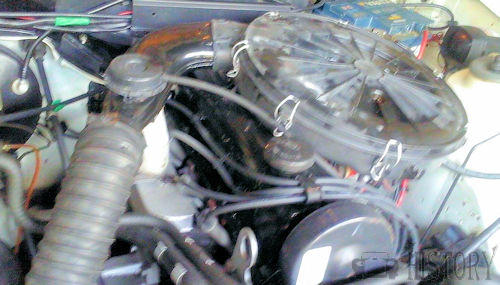 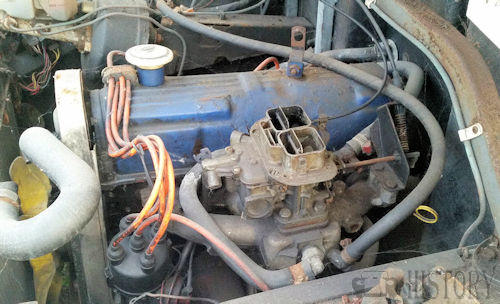 The 2.0 L (1,993 cc) was used in many Ford vehicles from the early 1970s. Due to its robustness and high tuning potential, it was often used as an aftermarket engine upgrade or base for building race and rally engines — not exclusively in Ford cars. The engine has bore of 90.82 mm (3.58 in) and 76.95 mm (3.03 in) stroke giving the displacement of 1993 cc. It was manufactured in several variants:

Although Ford marked its standard 2.0 L engine as HC, it actually uses engine codes meant for the 'increased performance variant' engines (coding starting with 'NE'), these have a compression ratio of to 9.2:1. This engine used different carburettor models across the years: 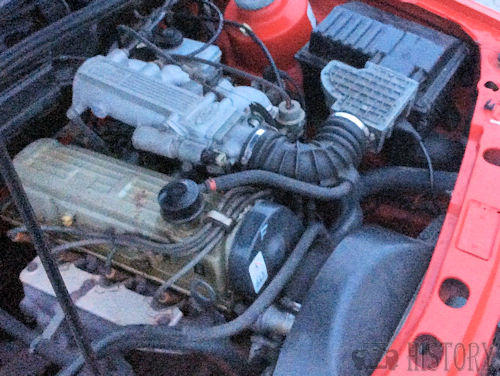 The injected 2.0 L used the Ford EEC-IV engine control system which brought the output up to 85 kW (114 hp) of power and 160 N·m (120 ft·lbf) of torque, although much of this increased performance can be attributed to the improved design of the EFI variants cylinder head. As the EEC-IV installation on most of those engines contains some Bosch parts that are easily visible in the engine compartment (air flow meter of the electromechanical "flap" type, injectors, fuel pressure regulator etc), it is often - but falsely believed that they are fitted with the Bosch L-jetronic injection system. Some of the TL20EFI engines have closed-loop lambda control, while others are lacking that feature.

This is the tuner’s favourite with the 205 ‘Injection’ block markings.

This variant was used in Ford Transit exclusively. The power output was 57 kW (75 hp).

In the beginning of the 1980s, Cosworth developed a 16-valve performance head conversion for the Pinto engine. This was seen by a Ford executive who asked Cosworth to develop it with a turbo for use in the new Ford Sierra RS Cosworth. The engine is therefore based on a modified Pinto block topped with the Cosworth-developed alloy head and Garrett turbo.

The engine block of the Ford OHC is the basis for the Cosworth YB engine. The British company Cosworth developed in-house a 16V cylinder head with two overhead camshafts for the engine block of the OHC. This cylinder head was taken over by Ford in terms of motorsport activities in the series production of the Ford Sierra. The exclusively turbocharged engine was offered in both the Sierra and Escort RS Cosworth . With this engine Ford achieved countless national and international individual victories and championships in touring car and rally sport.

In 1979-80, a draw-through, nonintercooled turbo version was produced for Mustang Cobras and some Capris. Lack of dealership and owner training resulted in many stuck turbochargers and other maintenance problems. They were limited to 5 PSI of boost, though Ford Motorsport sold a wastegate with an adjustable rod which allowed an increase up to 9 PSI. It was used in this carbureted form in a number of passenger cars, from the Fairmont Futura Turbo to the 1979 Indy Pace Car edition Mustang.

A dual-spark version (with two spark plugs per cylinder, distributor-less ignition, and reduced main bearing sizes) was introduced in the 1989 Ford Ranger and 1991 Ford Mustang. This version produced 78 kW (105 hp) and 183 N·m (135 lb·ft).

A stroked (by 7 mm) version of the 2.3 OHC Ford Ranger engine appeared in 1998. In addition to longer stroke, it used higher-flow cylinder heads utilizing narrower 7mm valve stems. Crankshaft counter balance weights were increased in count from 4 to 8. Output was 89 kW (119 hp) and 202 N·m (149 lb·ft). It was replaced in 2001 by the Mazda-derived Duratec 23, but Ford Power Products continues to sell this engine as the LRG-425.