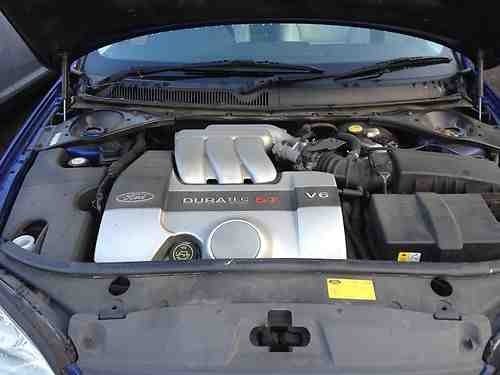 Ford Motor Company's modern 2.5 L and 3.0 L V6 automobile engines are evolutions of the same design, first used in the 1994 Ford Mondeo. This line is sold under the brand name "Duratec", as are many other engines.

The Mondeo V6 is a modern aluminum DOHC V6 with a 60° bank angle. The primary engineering input came from Porsche, who were developing a similar V6 before selling the engineering to Ford, and Cosworth, who helped with cylinder head manufacturing.The Jaguar AJ-V6 engine is similar but adds variable valve timing. Mazda's AJ version also has this feature.

An SVT version produced 195 hp (145 kW) and 165 lb·ft (224 N·m) in 1998. It included a larger throttle body from the Duratec 30, a new cone-shaped air filter, and abrasive flow machining processing on the intake manifold. SVT specific cams, a lighter flywheel and low-restriction exhaust complete the picture. Further improvements were made in 1999 that raised power output to 200 hp (149 kW) and 169 lb·ft (229 N·m) and were carried over in the 2000 model. The SVT engine was used in the 1998 to 2000 European Ford Mondeo and called the ST200, it also appeared in the American Ford Contour SVT.

Ford's standard DOHC V6 is known as the Duratec 30. It was introduced in 1996 as a replacement for the 3.8 L Essex engine in the Ford Taurus and Mercury Sable. It has 3.0 L (2967 cc) of displacement and produces between 200 hp (149 kW) and 240 hp (179 kW). The same engine is used by the Jaguar S-Type, Lincoln LS, Mazda MPV, Mazda6, Mondeo ST220 and many other Ford vehicles. It is essentially a bored-out (to 88.9 mm) Duratec 25 and is built in Ford's Cleveland Engine #2 plant. A slightly modified version for the Ford Five Hundred entered production at the Cleveland Engine #1 plant in 2004.

It has an aluminum engine block and aluminum DOHC cylinder heads. The cylinders are lined with cast iron. It uses SFI fuel injection, has 4 valves per cylinder and features fracture-split forged powder metal connecting rods and an assembled cast aluminum intake manifold.

There are two key versions of the Duratec 30:

The 2006 Ford Fusion, Mercury Milan, and Lincoln Zephyr feature a version of the Duratec 30 utilizing variable valve timing. The VVT is a RFF engine derived from the Mazda MZI and does not have the mechanical buckets as on the Lincoln LS version.

In second generation of the engine, it is updated to run on E85. Engine has an output of 240 bhp (179 kW; 243 PS) at 6550 rpm and 223 lb·ft (302 N·m) at 4300 rpm. Engine now includes Cam Torque Actuated Variable Cam Timing developed with Borg-Warner. Fuel saving features include adaptive knock control and aggressive deceleration fuel cutoff.