The Barra engines are a family of I6 and V8's by Ford Australia since 2002. These engines are unique to the Australian market and developed and manufactured in Geelong, Victoria. It was first introduced as a "Barra" in the Ford BA falcon, named after the "Barramundi" code name used during the development of the BA update. The 3 Valve versions of the 5.4 V8's were also labeled as Barra engines, whilst the higher specification 4 Valve variants were known as "Boss" engines. The last of the V8 and I6 Engines were built in the Geelong Factory, on the 26th September, 2016.

The current 6s are all DOHC engines with VCT. They are a development of the SOHC I6s produced between 1988 and 2002, which in turn are a development of the 3.3 and 4.1 L push-rod flat-tappet I6, developed in Australia as an " Alloy Head" Crossflow in 1981, eventually in both carburetted and injected versions, which itself was developed from the original iron-head cross flow engine from 1976, and which in turn was developed, again in Australia, from the original noncross flow integral inlet manifold iron head family of 'light' Ford sixes which originated in North America in the late 1950s intended for the original American Ford Falcon compact of 1959, initially in just a 144 cubic inch (2.4 L) displacement.
Common specifications to all I6's
Bore: 92.26 mm (3.6 in)
Stroke: 99.31 mm (3.9 in)
Displacement: 3984 cc
Number of valves: 24

This was the engine in six-cylinder variants of the BA Falcon, Fairmont, Fairlane, and Territory SUV and were produced between late 2002 and mid-2005. This was the first Falcon engine that came standard with DOHC and variable cam timing. This contributed to the significant jump in output over the base 157 kW SOHC Intech engine in the previous generation AU Falcon and a 11 kW gain over the Tickford enhanced VCT motor's 171kw. It also kept Ford's engine ahead of the low powered Holden Ecotec and L67 supercharged motors found in the contemporary Commodore.

This was the engine found in the BF Falcon and SY Territory. It began production in 2005. It is aesthetically the same and mechanically very similar to the Barra 182, however the slight increase in power is also due to an increase in compression ratio and a slight revision of the cam profile, as well as upgrading the BA's Black Oak ECU to the more powerful Spanish Oak ECU. The variable valve timing was now independent on both intake and exhaust. 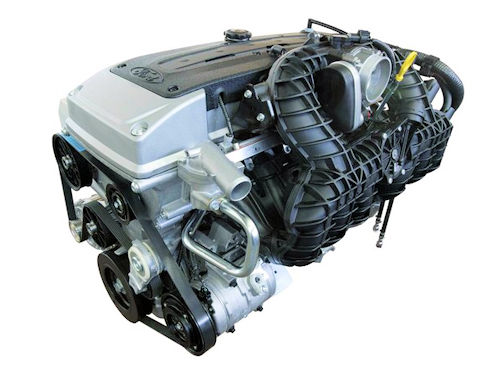 The Barra 195 is the last version of the naturally aspirated I6 engine and is in the Ford FG Falcon sedan and ute (the BF Falcon MkIII wagon and Ford Territory SY and SY II SUV and Territory SZ RWD Petrol use the Barra 190 engine). Modifications made to the engine include a revised plastic inlet manifold on naturally aspirated models and new cylinder head, which achieved minor power and economy improvements over the Barra 190.

This engine was produced for the BA Falcon XR6T between 2002 and 2005. It is similar to the Barra 182, except it has a slightly lower compression ratio, a single Garrett GT35/40r turbocharger, red rocker cover, and an intercooler.

Implemented in the BF Falcon XR6 Turbo and the Turbo Territory, it has been in production since 2005. It is the same as the Barra 190 except it has a slightly lower compression ratio, a single Garrett GT35/40r turbocharger, and an intercooler.

Production commenced in 2004 and it is found in the BA/BF Falcon-based FPV F6 Typhoon and Tornado models. The increase in power is achieved through the use of higher boost pressures from the otherwise under-utilised large Garrett GT3540 turbocharger.
It has a blue-coloured rocker cover.

The figures for the revised turbo engine for the FG XR6 Turbo mimic the old FPV turbo I6, but this is an incorrect assumption and the motors are not the same. Firstly, it has a redesigned low-profile intake plenum, as opposed to the circa 1994 broadband manifold intake which originated in the naturally aspirated EF Falcon. The engine employs a new turbocharger and intercooler in conjunction with the Barra 195s hardware and software updates. The result is that the FG XR6 Turbo is actually faster than both FPV's BF Typhoon and the FG XR8. The FG XR6 Turbo uses a smaller turbo than the BA/BF XR6 Turbo so it can spool faster, make more usable power, and make less noise than the larger turbo. This engine also features a 53 Nm overboost feature. The feature can engage depending on the driving style, and when the accelerator pedal is fully pressed to the floor, it can call the computer to overboost and add an additional 53 Nm on top of the 533 Nm, making it a total of 586 Nm of torque for a maximum of 10 seconds.

The high-power variant of the FG's turbo I6 is in the new FPV F6. Featuring a larger turbocharger and intercooler, this is the most powerful engine (and the first to produce more than 100 hp (75 kW) per litre) manufactured in Australia.

The final variant of the 4.0-litre I6 cylinder turbo-petrol engine featured in the FGX XR6 Turbo Sprint. The engine employs an over-boost feature for 10 seconds when optimal atmospheric conditions are met when under full throttle, boosting power & torque to 370 kW and 650Nm.

This engine was launched in 2002 with the BA Falcon and was a development of the Intech E-Gas engine. The E-Gas engine is designed to run on autogas only. It features a low-performance, high-reliability, low-maintenance Vialle closed-loop single-point venturi-style LPG-injector-less carburetion system in lieu of the standard sequential petrol injection system. This engine was carried over to the FG Falcon with only one option of a 4-Speed automatic transmission, without traction control but was replaced in mid-2011 by the EcoLPi system, which featured the ZF 6HP26 6-speed automatic transmission and traction control as per fitted to the petrol models.

This engine was launched in 2011 as a replacement for the E-Gas engine. It features a liquid phase injection autogas system which exceeds the power and torque outputs of a contemporary petrol engine.

Ford Australia has confirmed that the Barra 4.0 I6 will be discontinued along with the Ford Falcon and Territory. Ford Australia operations will cease at the latest October 2016, citing unsustainably high labour costs, high tax liabilities, irreparable brand damage, dwindling market share, lack of tariffs and an over saturated market with too many brands and razor-thin margins with cheaply manufactured imports from developing nations hovering over the bleak horizon.

The Barra V8s are based on the modular engine. All are of the 5.4 litre (330ci) variant with SOHC driving three valves per cylinder and feature VCT. The Falcon was the first vehicle in the Ford world to have the VCT Modular engine. The higher-performance V8s are called the Boss 260 and 290, and from November 2007, Boss 302 with DOHC and four valves per cylinder. They are named in this way due to the kilowatt output of the engines.
Common specifications to V8s
Bore: 90.2 mm
Stroke: 105.8 mm
Displacement: 5408 cc
Number of valves: 24 (32 for Boss series)

This was an optional engine on the BA Falcon and was produced between 2002 and 2005.

An option on the BF Falcon, its extra power comes from a slight increase in compression ratio. This is done safely with the addition of another knock sensor. It was in production since 2005. 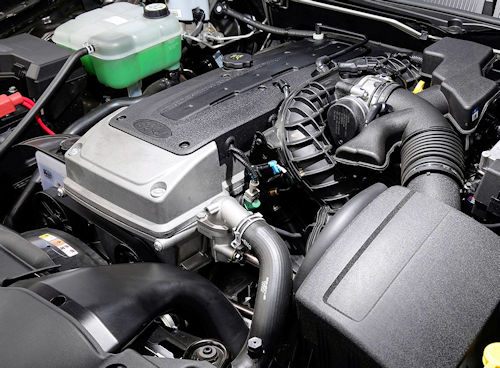