The Y-block engine is a family of overhead valve V8 automobile piston engines from Ford Motor Company. It was introduced in 1954(1953 Trucks celebrated 50 years of Ford with a Flathead V8) on Ford trucks and in 1954 on Ford cars to replace the side-valved Ford Flathead engine and was replaced by the Ford FE engine (on medium cars) and the Ford Windsor engine (on small cars) in 1962, and lasted until 1964 in Ford trucks.

Note that Lincoln introduced a very different and larger Y-block engine in 1952 for use on large cars and on Ford heavy duty trucks.

The first Y-block on Ford automobiles was the 1954 239 in³ (3.9 L) Ford engine; known for its deep skirting, which causes the engine to resemble a Y. Rated at 130 hp (97 kW), it replaced the 239 in³ (3.9 L) flathead which was rated at 106 hp (79 kW). The Y-block was considered a major advancement over the flathead. It is known for having oiling problems in the rocker shafts due to the fact the oil first went to the crankshaft bearing, then to the camshaft bearings, then to the rocker shafts. This problem plagued the entire Y-block family and could be remedied by running a copper line from the oil pump and then to the rocker shafts.

The oiling problem was caused by the passage from the center cam bearing to the cylinder head being offset by an inch and too small. The motor oils of the era were low in detergents, but high in coke; when combined with short trips and infrequent oil changes, this led to blockage of this passage. This left the lower end with ample oil while the rocker shaft assemblies literally burned up. The external oiler kit essentially provided oil to the rocker shafts from the oil pressure port on the outside of the engine.

A quick reference to the engine specifications for 1955-57 will show the Ford V-8s ahead of the Chevrolet counterparts in displacement, horsepower and torque. The real enemy of the Y-block was its displacement limit. The original architecture was very small and tight. Even with the benefit of today's technology (aftermarket rods and stroker cranks), the real limit of a Y-block is about 348 in³, while the Chevrolet could be modified well past the factory limit of 400 in³. The ever-increasing size and weight of the standard passenger car, the added parasitic losses for accessories (power steering, power brakes and air conditioning), cheap gasoline and the horsepower race all caused Ford to outgrow its first OHV V-8 engine. It is interesting to note that both Ford and Chevrolet went to optional "big block" engines for 1958, 352 in³ (5.8 L) at Ford compared to 348 in³ (5.7 L) at Chevrolet.

This engine, as well as the 292 version starting in 1956, was also produced by Ford of Brazil at its São Paulo plant facility (Ipiranga plant). A new building was opened on November 21, 1958 by the Brazilian President, Juscelino Kubitschek de Oliveira, to produce the first Ford engine in South America. The 272 version was used on Brazilian F-series trucks until 1977 and on the Brazilian Galaxie 500, launched in April 1967.

The 292 in³ (4.8 L) was also introduced in 1955. It was used in the Ford Thunderbird, Mercury, and some high-end Ford cars. In 1956, it was an optional engine for Ford cars, was commonly used in high-end models, and called the "Thunderbird V8" (the optional larger 312 in³ engine was called the "Thunderbird Special V8"). The 292 in³ was also used in Ford trucks, namely the F-100, through 1964. The 292 forged steel crankshaft was popular with motor enthusiasts in increasing the performance potential of the 312. With some machine work, this part was used to upstroke the 312 V8 to 340 in³ in combination with custom-made pistons and a .040 inch overbore (4.040 in. x 3.3 in.).{See Mummert's Y-Block website for details.)

Ford Australia released this V8 motor as its only option in the 4-door Customline sedan from 1955-1959 (based on the Crown Victoria), and its utility, based on the same styling as the Customline, called a Mainline.

This particular version of the Y-Block engine was used in Argentina in the F-100 pick-up well into the 1960s, and was known as Fase I (Phase I). In 1971, the engine was modified to accept a new-style cylinder head with a different valve arrangement (E-I-E-I-E-I-E-I versus E-I-I-E-E-I-I-E), new intake and exhaust manifolds and was renamed Fase II (Phase II). In this form, the 292 Fase II continued into the 1980s in the F-100, and was also used in the Argentine Ford Fairlane (built from 1969–1982, and based heavily on the U.S. 1968 model). All Argentine versions of this engine feature a cast crankshaft rather than the forged example that equipped US heavy duty engines. The 292 version was also produced by Ford of Brazil and equipped the Brazilian LTD starting in 1969. Both the 272 and 292 engines were replaced on Brazilian cars by the 302 engine starting on 1976 model year.

The 312 in³ (5.1 L) engine came out for the 1956 model year and was again used in high-end Ford and Mercury cars, including the Thunderbird.

The last regular application of the 312 V8 in the U.S. was for certain 1960 Mercury models. Though considered to be a high performance engine in 1956 and 1957, it was downgraded to an "economy" engine with low compression and 2-barrel carburetor by 1960. 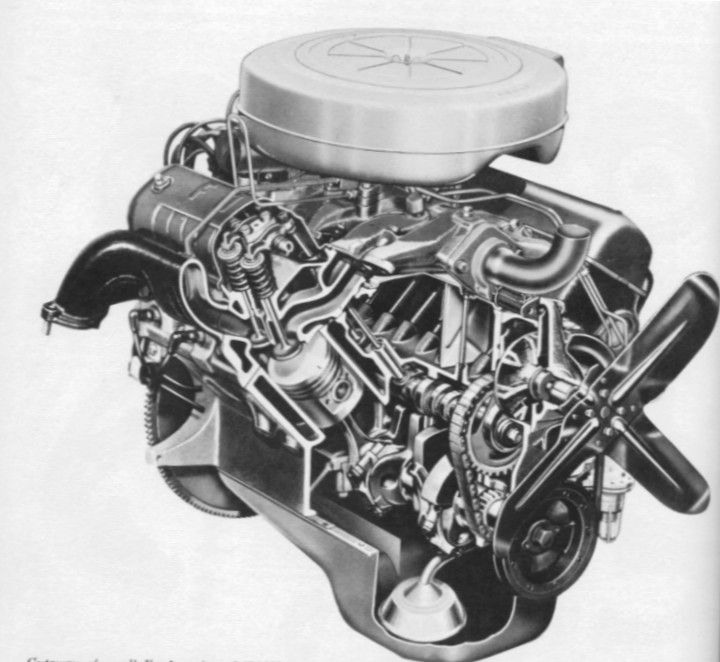