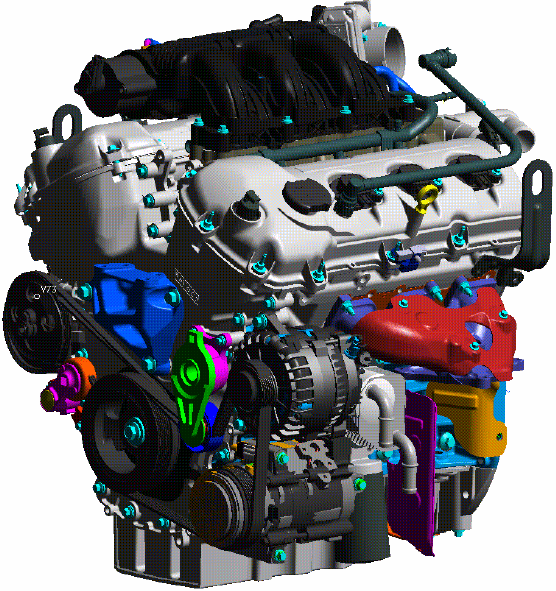 Originally there was a 2.5 L V6 introduced with the Ford Mondeo. When the 2000 Mondeo was introduced, the 1.8 L and 2.0 L engines became Duratecs too. Now there are engines of all sizes called Duratec. In North America, Ford uses the Duratec name on all its dual overhead cam 4- and 6-cylinder engines. In Europe, all Ford petrol engines are called Duratec.

The 3.0 L Duratec 30 or Mazda AJ was introduced in 1996 as a replacement for the 3.8 L (230 cu in) Essex V6 in the up-market versions of the Ford Taurus/Mercury Sable. It has 2,967 cc (181 cu in) of displacement and produces between 200 hp (150 kW) and 240 hp (180 kW). With an aluminum block and cylinder heads, it is the same basic engine used in the Jaguar S-Type, Lincoln LS, Mazda MPV, Mazda 6, Mondeo ST220 and many other Ford vehicles. It is essentially a bored-out (to 89 mm) Duratec 25 and is built in Ford Motor Company's Cleveland Engine #2 plant in Cleveland, Ohio. A slightly modified version for the Ford Five Hundred entered production at the Cleveland #1 plant in 2004.

There are two key versions of the first-generation Duratec 30:

The final major revision of the Duratec 30 was seen on the 2009 Ford Escape and Mercury Mariner small SUVs. Cam-torque-actuated iVCT was introduced in this version along with better breathing heads. The result is a bump from the previous version's 223 bhp (166 kW; 226 PS) to 240 hp (180 kW) at 6550 rpm. The newly refreshed engine made its way into the redesigned Ford Fusion as the optional base V6, and the Mercury Milan as the only V6 for the 2010 model redesign.

The 3.0L delivered ample power in the midsize sedan segment, however the Fusion later received the Duratec 35 V6 as a top-tier "Sport" option to remain competitive with larger V6 offerings in the Toyota Camry and Honda Accord. The Duratec 30 remained as a step up from the base I4 in the Fusion, but the Milan kept the 3.0L as its sole V6 until it was discontinued for the 2011 model year. The 3.0L Has the potential to deliver more power, but it is believed to be nearing the end of its development; Ford will begin to phase it out in favor of newer engine lines. The Duratec 30 will be dropped as the higher-end powerplant in the 2013 Escape in favor of the 2.0L EcoBoost I4, which produces similar power, more torque, and better fuel economy. As shown in the 2013 Ford Fusion, the Duratec 30 will also be replaced by the EcoBoost 2.0L. It is unlikely that another revision of the engine will appear in any future Ford vehicles, and will be replaced by the EcoBoost 2.0L I4, and Cyclone 35 V6. The original version of the engine without iVCT is available as a crate engine from Ford Power Products, producing 232 bhp (173 kW; 235 PS).

A racing version of this engine exists and is used on mini prototypes like the Juno SS3 V6. It is a 3.0 liter naturally aspirated non variable timing engines producing between 350 and 400 horsepower with a red line of around 8700 rpm. The engine has a 40 hour racing life span before it needs to be rebuilt with rings and bearings, and has proven very reliable and competitive. The engine has a Jaguar badge, and is branded as a Jaguar 3.0 liter V6 since it is built and mostly sold in the U.K. 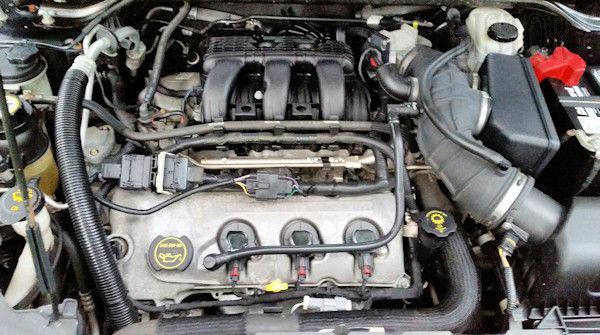 The Duratec 35 is a 3.5 L (3496 cc; 213 CID) V6 with a 92.5 mm (3.64 in) bore and 86.7 mm (3.41 in) stroke. It began production in fall 2006 and is the first member of the all-new Ford Cyclone engine family.The D35 is an all-aluminum DOHC 4V 60° bank angle V6 engine with variable cam timing on the intake camshafts and DAMB tappets. The Duratec 35 is ULEV-II compliant and is capable of meeting the PZEV by adding a zero evaporative emission fuel system and extending the emissions system warranty to 15 years or 150,000 miles for models in California and some Northeast states.

The engine produces 290 hp (216 kW) in the following applications:

It is a twin turbocharged, gasoline direct injected (GTDI) version of the Duratec 3.5L.

The Duratec 37 3.7 L (3721 cc; 227 CID) V6 is another member of the Ford Cyclone engine family. The Duratec 37's additional displacement over the Duratec 35 is achieved through a 3 mm (0.1 in) increase in bore diameter which results in a 95.5 mm (3.76 in) bore. It is currently produced at Lima Engine in Lima, Ohio and Cleveland Engine in Cleveland, Ohio. 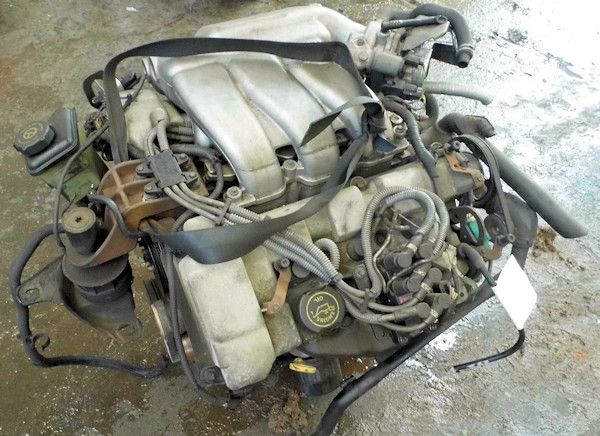