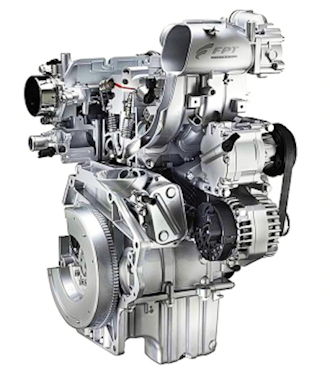 The twin-air engine is a twin-cylinder in-line ( parallel twin ) engine with variable valve timing ( MultiAir ) from Fiat's subsidiary Fiat Powertrain Technologies .
The engine has been in use since September 2010. In 2011 The was honored as International Engine of the Year and there both overall winner and winner of the categories best engine under 1 liter capacity, most economical engine and awarded as the best new development of the year.

Fiat put the twin-air engine on the concept of downsizing .Parallel twin motors are mechanically simple in principle and can thus be manufactured inexpensively, but they also run more restless than engines with more cylinders. At least one balancing shaft is therefore necessary for a smooth running in passenger cars . The advantage of the two-cylinder design lies above all in the higher efficiency . This is due to the better ratio of displacement to the inner surface of the combustion chamber ( A / V ratio ). The thermal losses over the cylinder wall, as well as the frictional resistance within the engine, are thereby lower than in a comparable engine with more than two cylinders.

Furthermore, the twin-air engine has the MultiAir valve control. This is a variable intake valve control that allows precise control of the start of intake, intake duration and valve lift, further increasing engine efficiency.

The twin-air engine is available with 62 kW at 5500 / min and turbocharging since September 2010 in the Fiat 500 . The same engine is used in the second generation of the Lancia Ypsilon .

Other variants include a naturally aspirated engine with 48 kW (65 hp) and a higher turbocharged version with 77 kW (105 hp). The Twin-Air can be combined with a dual-clutch transmission and equipped for natural gas operation. The Twin-Air is 23% shorter and about 10% lighter than its predecessor in Fiat (1.2-liter 4-cylinder). This favors the combination with electric drives ( hybrid drive ) to further reduce fuel consumption.

The twin-air engine was offered in 11/2013 in the following models of the Fiat Group: