Named to honour Ferrari founder Enzo Ferrari's son and heir Dino Ferrari, the Dino models used Ferrari racing naming designation of displacement and cylinder count with two digits for the size of the engine in deciliters and the third digit to represent the number of cylinders, i.e. 246 being a 2.4-litre 6-cylinder and 308 being a 3.0-litre 8-cylinder. Ferrari street models of the time used a three-digit representation of the displacement in cubic centimeters of one of the 12 cylinders, which would have been meaningless in a brand with differing numbers of cylinders.

The Dino 246 was the first Ferrari model produced in high numbers. It is lauded by many for its intrinsic driving qualities and groundbreaking design. In 2004, Sports Car International placed the car at number six on its list of Top Sports Cars of the 1970s. Motor Trend Classic placed the 206/246 at number seven in their list of the 10 "Greatest Ferraris of all time".

The production Dino 206 GT was designed by Leonardo Fioravanti at Pininfarina and built by Scaglietti. It had the soft edges and curving lines typical of earlier Italian cars, unlike its angular successor, the Bertone designed 308 GT4, which had the straighter lines and sharp edges seen most boldly in Bertone's later Fiat X1/9. 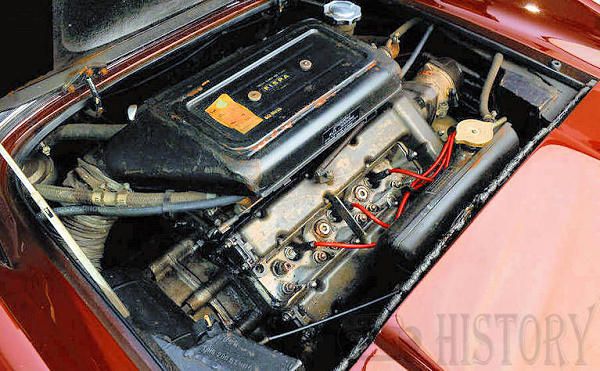 The 206 GT used a transverse-mounted 2.0 L all-aluminum, 160 hp (119 kW) at the 8,000 rpm redline, 65-degree V6 engine with dual overhead camshafts and a 9.7:1 compression ratio. Torque was 138 pounds*foot at 6,500 rpm. The crankshaft featured four main bearings. Induction was via three Weber 40 DCN/4 2-barrel carburetors. The 206 GT was the first car sold by Ferrari which used an electronic ignition, a Dinoplex C capacitive discharge ignition system that was developed by Magneti Marelli for the high revving Dino V6 engine (hence the name Dinoplex). It was also the first Ferrari product to have a direct rack-and-pinion steering.

The same 2.0L engine was used in the Fiat Dino Coupe and Spider, produced during the same period. The conversion of the Dino 196 racing engine for road-going use in the Dino (and the two Fiat models) was entrusted by Fiat to Aurelio Lampredi, to whom Ferrari owed so many great engines. Lampredi, interviewed in the early 1980s (he died in 1989 at the age of 72), noted that, "Things didn't work out exactly as Ferrari had foreseen." Ferrari had counted building the engines at Maranello, but Fiat's management insisted on taking control of production, to avoid any breaks in the engine supply.

Fiat quoted 160 hp DIN for the Fiat Dino and Coupé, and in 1967 Ferrari - presenting the first prototype of the Dino 206 GT - claimed 180 hp. This, however, was not the case. Both engines were made by Fiat workers in Turin on the same production line, without any discrimination as to their destination, and all were exactly the same. 150 units were simply taken from the first production batch at the beginning of 1968 to power the Dino 206 GTs. Jean-Pierre Gabriel, writing in "Les Ferraris de Turin", notes that, "La declaration de Ferrari ne reposait sur aucun fondament technique" - Ferrari's statement had no technical basis! However, as always, it was certainly a savvy piece of marketing by the Commendatore.

Later Fiat Dinos also used the 2.4L engine, although significantly fewer were produced with this motor.

The "Dino" marque was created to market a lower priced, "affordable" sports car capable of taking on the Porsche 911. Ferrari's expensive V12's well exceeded the 911 in both performance and price. Enzo did not want to diminish his exclusive brand with a cheaper car, so the "Dino" was created.

The name "Dino" honours the founder's late son, Alfredo "Dino" Ferrari, credited with designing the V6 engine used by the marque. Along with famed engineer, Vittorio Jano, Dino influenced Enzo Ferrari's decision to produce a line of racing cars in the 1950s, with V6 and V8 engine designs. History shows that Alfredo Ferrari did not have a hand in the actual design of the V6 motor that made its way into the Dino.

Ferrari wished to race in the new 1.6 L Formula 2 category in 1967 with the Dino V6 engine. However, the company could not meet the homologation rules which called for 500 production vehicles using the engine to be produced. Enzo Ferrari therefore asked Fiat to co-produce a sports car using the V6, and the front-engined, rear-drive Fiat Dino was born. It used a 2.0 L (1987 cc) version of the Dino V6, allowing Ferrari to compete in the category.

At the time, the thought of using a mid-engine layout in a production car was quite daring, although the design was common in the world of sports car racing. A mid-engined layout placed more of the car's weight over the driven wheels, and allowed for a streamlined nose, but led to a cramped passenger compartment and more challenging handling. Lamborghini created a stir in 1966 with its mid-engined Miura, but Enzo Ferrari felt that a mid-engine Ferrari would be unsafe in the hands of his customers. Eventually he relented, and allowed designer Sergio Pininfarina to build a mid-engined concept for the 1965 Paris Motor Show, but demanded that it wear the Dino badge alone. The 1966 Turin car show featured a refined Dino 206S. The Turin 206S was a closer prototype to the actual production version. Response to the radically styled car was positive, so Ferrari allowed it to go into production, rationalizing that the low-power V6 engine would keep his customers out of trouble. 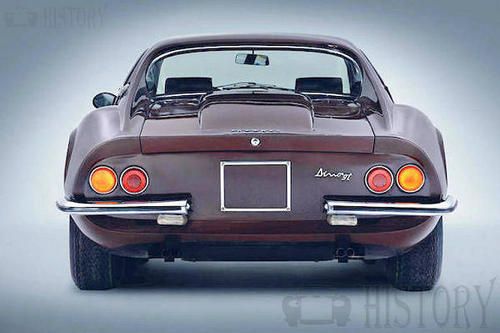