The 308 GT4 2+2 was a groundbreaking model for Ferrari in several ways: It was the first production Ferrari to feature the mid-engined V8 layout that would become the bulk of the company's business in the succeeding decades, and was the first production Ferrari to feature Bertone (rather than Pininfarina) bodywork. Pininfarina was upset by the decision to give cross-town rival Bertone the design, considering all they had done for Ferrari.

The Dino 308 GT4 was introduced at the Paris Motor Show in November 1973 and featured angular lines entirely different from its curvaceous 2-seater brother, the Dino 246, and later brother, the GTB & GTS. The styling was controversial at the time, with some journalists comparing it to the Bertone-designed Lancia Stratos and Lamborghini Urraco. The 308 GT4 finally gained the "Prancing Horse" badge in May 1976, which replaced the Dino badges on the hood, wheels, and the steering wheel.

The chassis was based on the Dino 246 but was stretched for a 2,550 mm (100.4 in) wheelbase to make room for the second row of seats. The suspension was fully independent and the V8 was mounted transversely.

It is also one of the cheaper second-hand Ferrari models - there was a 'limited budget' show about it in Wheeler Dealers, and a Top Gear Challenge featuring a 308 and its contemporaries. A yellow 308GT4 was bought by presenter Richard Hammond, and it was driven with a Maserati Merak and a Lamborghini Urraco as part of their cheap supercars challenge. All of the cars were in poor condition, and after about 50 miles of driving, all of the Ferrari's engine electronics failed; and the other two cars proved to be unreliable as well and did not complete the challenge.

Power output was 180 hp (126 kW) at 7,700 rpm for a top speed of 137 mph (220 km/h). Smaller Weber 34 DCNF carburetors, a lower final drive ratio and skinnier tires completed the technical changes for the 208. Chrome (rather than black) accents outside and the lack of fog lights were external visual indicators of the smaller-engined GT4. Inside the 208 GT4 featured a black rather than silver dash facing. 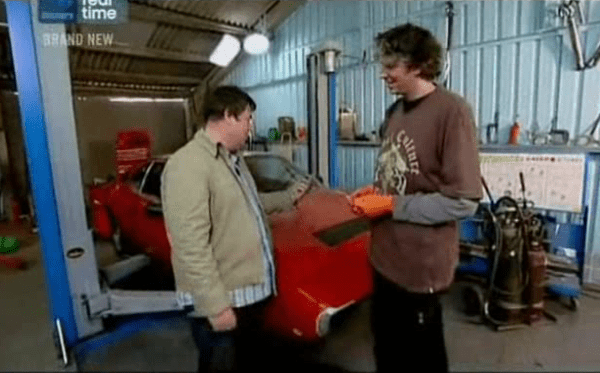