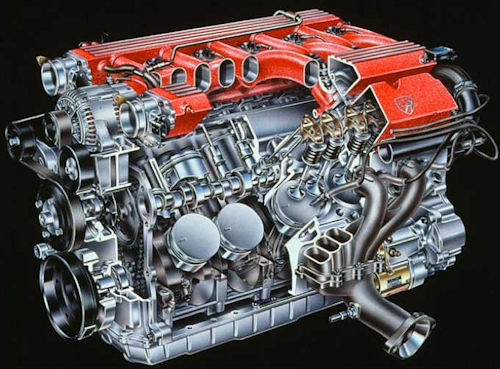 A V10 engine is a V engine with 10 cylinders in two banks of five, which produces a distinct exhaust note.

The V10 configuration is not an inherently balanced design like a straight-6, V-12, flat-6, or V-8 (ignoring the counterweights) and does still have a small second order rocking motion, which can only be compensated by two additional balance shafts.

Until recently, the V10 configuration was not a common configuration for road cars; a V12 is only slightly more complicated and runs more smoothly, while a V8 is less complex and more economical. Nevertheless, modern engineering has made it possible to use V10 engines for applications where a V8 would produce insufficient power and a V12 would be too complicated or bulky For the Lexus LFA, the engineers selected a V10 engine over an equivalent displacement V8 because they could not get the V8 to rev as high as the V10, and over a V12 for its lower reciprocating mass, allowing for more rapid engine response. For Audi in their Audi S8 5.2 FSI quattro, the V10 was a compromise between a V12 which would be too long and suffer more internal friction due to extra cylinders and values, and a V8 which would be more compact but have larger heavier pistons and produce lower revs.

Dodge was the first to develop a modern V10 engine, originally designing a version of its LA series small block for use in trucks. The Dodge engine saw its first production use in substantially revised form in the Dodge Viper while the truck version of the engine was used starting with the 2nd generation Dodge Ram . It discontinued in that application after 2003. However, 2003 also saw the introduction of the Dodge Ram SRT-10, a performance model meant to rival Ford's successful V8 powered F-150 SVT Lightning. The Viper engine (a 90-degree engine with odd firing order to obviate the need for a balance shaft) has been tweaked through the years, and for the fifth-generation Viper produces 640 hp (477 kW; 649 PS) in a standard state of tune from its 8.4 liter displacement. The previous generation engine is used by Bristol, in tuned form, in their two-seat Fighter coupe, where it can produce upward of 630 hp (470 kW; 639 PS).

Ford also developed a heavy-duty V10 version of their Triton engine to replace the 460 big block in truck applications. It was introduced in the E-Series/Econoline full-size van. The F-Series Super Duty and Excursion SUV furthered the engines popularity. The Triton 6.8 V10 is still in production today.

European marques were slower to adopt the V10 configuration. However, high-revving V10 power-plants were incorporated into supercars from Lamborghini and Porsche. BMW and Audi later unveiled ten-cylinder versions of their mid-range saloons (the BMW 5-Series and Audi A6 families, respectively). Audi here profited from their Lamborghini ownership, which allowed them to source the Gallardo's V10 for their own cars. Volkswagen also developed a turbodiesel V10; their Volkswagen Phaeton was the first production sedan to have a V10.

A list of post-war V10-engined production cars (sorted alphabetically by manufacturer, sub-sorted by year of introduction):

The most widespread use of the V10 has been in Formula One racing. Alfa Romeo made the first modern Formula One V10 in 1986, although it was never used in a Formula One car. Later the configuration was introduced by Honda and Renault before the 1989 season. The introduction of the 3.5 litre rule after turbos were outlawed following 1988 made the V10 seem the best compromise between the V8 and V12. V10 engines became commonplace after the reduction from 3.5 to 3 liters in 1995, and were used exclusively by teams from 1998 to 2005. Renault had a more flat 110° angle in 2002 and 2003, but reverted to a more conventional 72° following the change in rules which dictated that an engine must last two race weekends. In a further change to the rules, V10s were banned for the 2006 season onwards in favor of 2.4 liter V8s, however a concession was made in that season for teams to use significantly rev limited V10s; Scuderia Toro Rosso being the only team to use this option.

There are also cars with V10 engines in sports car racing, usually with Judd power plants with 4 or 5 liter engines, made available for customers, although the first V10 was seen in the works Peugeot 905 and the Works Toyota TS010, in the final races of the 1990 World Sportscar Championship season.