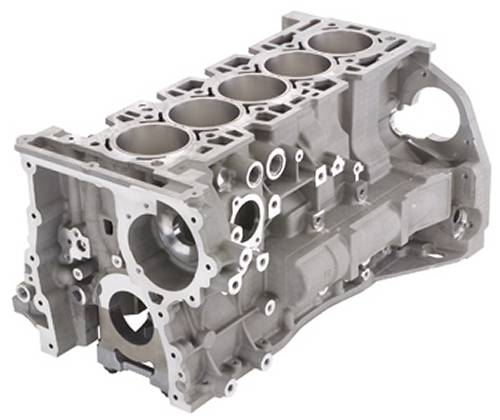 The straight-five engine or inline-five engine is an internal combustion engine with five cylinders aligned in one row or plane, sharing a single engine block and crankcase. This configuration is a compromise between the smaller inline-four engine and the larger straight-6.

Henry Ford had an inline-five engine developed in the late 1930s to early 1940s for a compact economy car design, which never saw production due to lack of demand for small cars in the United States. Consequently, a straight-five engine did not see production for passenger cars until Mercedes-Benz introduced the OM617 diesel in 1974. The first production petrol straight-five was the 2.1 R5 introduced by Volkswagen Group in the Audi 100 towards the end of the 1970s, developments of which powered the Audi Quattro rally racer.Since Volvo introduced their Volvo 850 in 1992, much of their lineup has switched to straight-five power, with their engines also seeing use in Ford's Focus ST and RS models. Honda used straight-fives in the Vigor, Inspire, Ascot, Rafaga, and Acura TL.

A given power stroke can last no more than 180 degrees of crankshaft rotation, so the power strokes of a four-cylinder engine are sequential, with no overlap. At the end of one cylinder's power stroke another cylinder fires.

Five-cylinder engines has a crank with 72 degree angles (except for the VW V5, that has an offset in the crank that corresponds to the angle between the cylinders. Despite the V configuration the engine has even firing intervals.). Most five cylinder engines has the firing order 1-2-4-5-3. Firing of one cylinder after another (e.g. 1-2-3-4-5 in case of a five cylinder engine) is never used except in 3 cylinder engines where there is no alternative. The reason for this is that the resulting engine will have a strong tendency of rocking from end to end, as well as having generally poor balance.

A five-cylinder engine is longer and more expensive to manufacture than a comparable four-cylinder engine, but some manufacturers feel these costs are outweighed by its greater capacity in a smaller space than a six-cylinder.

From the standpoint of driving experience, five-cylinder engines are noted for combining the best aspects of four- and six-cylinder engines. They generate more power and torque than four-cylinder engines, while maintaining better fuel economy and "pep" than six-cylinder engines. Five-cylinder turbos have been used on more than one occasion in sport and racing applications for their balance of performance qualities. The Volvo S60 R has a 2.5 litre turbocharged inline five-cylinder engine which is capable of generating 300 brake horsepower (224 kW) and 295 lbf·ft (400 N·m) of torque across a large amount of its rpm ranges. The new Ford Focus RS performance car uses the same Volvo 5-cylinder engine, developed (by Ford) to very similar power levels, and is one of the most powerful FWD production cars ever created. Another example of a high power 5 cylinder car is the Audi RS2, with its 2.2 turbocharged engine making 311 hp.

The use of straight-five petrol engines in mass production cars only became truly viable with the advent of reliable fuel injection. A five-cylinder engine using a carburetor fuel system has an unavoidable problem in that the length of the inlet manifold between the carburetor varies too greatly between cylinders at the ends of the engine and those nearer the carburetor for reliable and consistent fuel delivery. Using multiple carburetors (two or three) always results in one carburetor feeding more cylinders than the other, which also produces running and tuning problems. In theory individual carburetors could be used for each cylinder, but this approach is expensive and still brings with it the attendant difficulties in balancing the multiple carbs. Multi-point fuel injection circumvents all the above problems by feeding each cylinder individually from a central, single pump. This fuelling issue was never present in diesel engines (except volvo D5) which used direct injection from the very start, which is why large five-cylinder diesels were commonly seen decades before the type's adoption for automotive use.

The inline five is mostly known for its charactaristic sound. Unlike other engine configurations, the inline five's sound cannot replicated by doubling the cylinders.

The smallest production straight-five was found on the 1981 Audi 100, with 1921 cc of displacement.Audi used straight-five engines in many of their cars between 1977 and the early 1990s, and started using them again in the 2000s along with VW. Mercedes used five-cylinder configuration for their diesels in the 1970s all the way to the 2000s. The GM Atlas L5R 3700 is the largest at 3,654 cc. Currently Volvo Cars uses the straight five-cylinder engine as their mainstay engine in every vehicle in the lineup. All of the inline five engines used by Volvo and Ford are built at the Volvo Skövde engine plant in Skövde, Sweden.