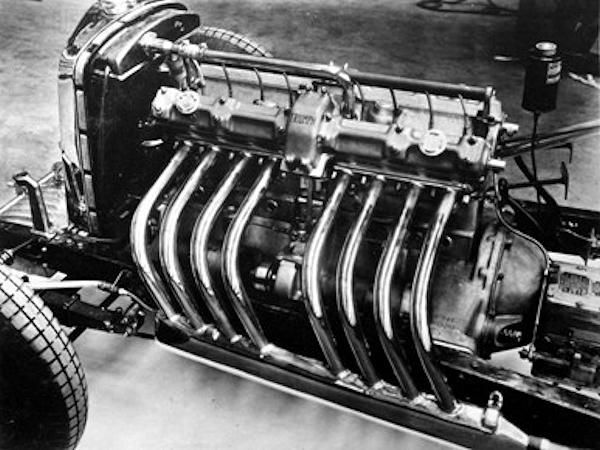 The straight-eight engine or inline-eight engine is an eight-cylinder internal combustion engine with all eight cylinders mounted in a straight line along the crankcase. The type has been produced in side-valve, overhead-valve, sleeve-valve and overhead-cam configurations.

A straight-8 can be timed for inherent primary and secondary balance, with no unbalanced primary or secondary forces or moments. However, crankshaft torsional vibration, present to some degree in all engines, is sufficient to require the use of a harmonic damper at the accessory end of the crankshaft. Without such damping, fatigue cracking near the rear main bearing journal may occur, leading to engine failure.

Although an inline six cylinder engine can also be timed for inherent primary and secondary balance, a straight-8 develops more power strokes per revolution and, as a result, will run more smoothly under load than an inline six. Also, due to the even number of power strokes per revolution, the straight-8 does not produce unpleasant odd-order harmonic vibration in the vehicle's driveline at low engine speeds.

The smooth running characteristics of the straight-8 made it popular in luxury and racing cars of the past. However, the engine's length demanded the use of a long engine compartment, making the basic design unacceptable in modern vehicles. Also, due to the length of the engine, torsional vibration in both crankshaft and camshaft can adversely affect reliability and performance at high speeds. In particular, a phenomenon referred to as "crankshaft whip," caused by the effects of centrifugal force on the crank throws at high engine rpm, could cause physical contact between the connecting rods and crankcase walls, leading to the engine's destruction. As a result, the design has been displaced almost completely by the shorter V8 engine configuration.

The first straight-eight was conceived by Charron, Girardot et Voigt (CGV) in 1903, but never built.Great strides were made during World War I, as Mercedes made straight-eight aircraft engines. Advantages of the straight-8 engine for aircraft applications included the aerodynamic efficiency of the long, narrow configuration, and the inherent balance of the engine making counterweights on the crankshaft unnecessary. The disadvantages of crank and camshaft twisting were not considered at this time, since aircraft engines of the time ran at low speeds to keep propeller tip speed below the speed of sound.

Unlike the V8 engine configuration, examples of which were used in De Dion-Bouton, Scripps-Booth, and Cadillac automobiles by 1914, no straight-8 engines were used in production cars before 1920.

Straight-8 engines were used in expensive luxury and performance vehicles until after World War II. Bugattis and Duesenbergs commonly used double overhead cam straight-8 engines. Other notable straight-8-powered automobiles were built by Daimler, Mercedes-Benz, Isotta-Fraschini, Alfa Romeo, Stutz, Stearns-Knight and Packard. One marketing feature of these engines was their impressive length — some of the Duesenberg engines were over 4 ft (1.2 m) long, resulting in the long hood (bonnet) found on these automobiles.

Premium automobiles in the United States

In the late 1920s, volume sellers Hudson and Studebaker introduced straight-8 engines for the premium vehicles in their respective lines. They were followed in the early 1930s by Nash (with a dual-ignition unit), REO and the Buick, Oldsmobile and Pontiac divisions of General Motors.

The Buick straight-8 engine was an overhead valve design, while the Oldsmobile and Pontiac straight-8s were flathead engines. Chevrolet, as an entry-level marque, did not have a straight-8. Cadillac, the luxury brand of General Motors, stayed with their traditional V8 engines. In order to have engines as smooth as the straight-8s of its competitors, Cadillac introduced the crossplane crankshaft for its V8, and added V12 and V16 engines to the top of its lineup.

Ford never adopted the straight-8, using V8 engines in their entry-level cars and V8 or V12 engines in their Lincoln luxury cars from the 1930s on. Chrysler used a flathead straight-8 in its premium Chrysler, Dodge and DeSoto cars, including the Imperial luxury model.

After World War II, changes in the automobile market resulted in the decline and final extinction of the straight-8 as an automobile engine. The primary users of the straight-8 were American luxury and premium cars that were carried over from before the war. A Flxible inter-city bus used the Buick straight-8.

During World War II, improvements in the refinery technology used to produce aviation gasoline resulted in the availability of large amounts of inexpensive high octane gasoline. Engines could be designed with higher compression ratios to take advantage of high-octane gasoline. This led to more highly stressed engines which amplified the limitations of the long crankshaft and camshaft in the straight-8 engines.

By the end of the 1970s overhead valve V8s powered 80% of automobiles built in the US, and most of the rest had six-cylinder engines.

In Europe, many automobile factories had been destroyed during World War II, and it took many years before war-devastated economies recovered enough to make large cars popular again. The change in the design of cars from a long engine compartment between separate fenders to the modern configuration with its shorter engine compartment quickly led to the demise of the straight-8 engine. As a result, four- and six-cylinder engines powered the majority of cars in Europe, and the few eight-cylinder cars produced were in the V8 configuration.

The British Army selected Rolls Royce straight-8 engines in the Alvis FV 600 armoured vehicle family. The Saladin armoured car was a 6x6 design with the engine compartment in the rear, a 76.2mm low pressure gun turret in the centre and the driver in front. The Saracen armoured personnel carrier had the engine in front with the driver in the centre and space for a 'few' troops in the rear. The Stalwart amphibious logistics carrier has the driver's compartment over the front wheels, the engine in the rear and a large load compartment over the middle and rear. The Salamander firefighting vehicle was unarmoured, and resembled the Stalwart with a conventional fire engine superstructure.

Despite the shortcomings of length, weight, bearing friction, and torsional vibrations that led to the straight-8's post-war demise, the straight-8 was the performance engine design of choice from the late 1920s to the late 1940s, and continued to excel in motorsport until the mid-1950s. Bugatti, Duesenberg, Alfa Romeo, Mercedes-Benz and Miller built successful racing cars with high-performance dual overhead camshaft straight-8 engines in the 1920s and 1930s.

The Duesenberg brothers introduced the first successful straight-8 racing engine in 1920, when their 3 L engine placed third, fourth and sixth at the Indianapolis 500. The following year one of their cars won the French Grand Prix, while two others placed fourth and sixth in the race. Based on work the company had done on 16-cylinder aircraft engines during World War I, the overhead camshaft, three-valve-per-cylinder engine produced 115 brake horsepower (86 kW) at 4,250 rpm, and was capable of revving to an astonishing (at the time) 5,000 rpm. No Grand Prix engine before the war had peaked at more than 3,000 rpm.[13]

Bugatti experimented with straight-8 engines from 1922, but in 1924, he introduced the 2 L Bugatti Type 35, one of the most successful racing cars of all time, which eventually won over 1000 races. Like the Duesenbergs, Bugatti got his ideas from building aircraft engines during WWI, and like them, his engine was a high-revving overhead camshaft unit with three valves per cylinder. It produced 100 bhp (75 kW) at 5,000 rpm and could be revved to over 6,000 rpm. Nearly 400 of the Type 35 and its derivatives were produced, an all-time record for Grand Prix motor racing.

Alfa Romeo were the first to react to the engineering problems of the straight-8: in their racing car engines for the P2 and P3 and in their Alfa Romeo 8C 2300/2600/2900 sports cars of Mille Miglia and Le Mans fame the camshaft drive had been moved to the engine centre, between cylinders #4 and 5, thus reducing the aforementioned limitations. The straight-8 was actually built as a symmetrical pair of straight-4 engines joined in the middle at common gear trains for the camshafts and superchargers. It had two overhead camshafts, but only two valves per cylinder.

Mercedes-Benz would create the last notable straight-8 racing cars in 1955, with the championship-winning W196 Formula One racing car and the 300SLR sports racing car. The 300SLR was famous for Stirling Moss and Denis Jenkinson's victory in the 1955 Mille Miglia, but notorious for Pierre Levegh's notorious accident at the 1955 24 Hours of Le Mans. The 300SLR was the final development of the Alfa Romeo design of the early 1930s as not only the camshaft, but now also the gearbox was driven from the engine's centre. Engineers calculated that torsional stresses would be too high if they took power from the end of the long crankshaft, so they put a central gear train in the middle (which also ran the dual camshafts, dual magnetos, and other accessories) and ran a drive shaft to the clutch housing at the rear