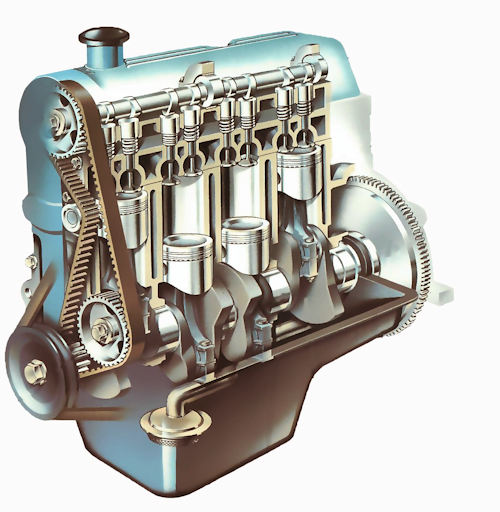 The inline-four engine or straight-four engine is an internal combustion engine with all four cylinders mounted in a straight line, or plane along the crankcase. The single bank of cylinders may be oriented in either a vertical or an inclined plane with all the pistons driving a common crankshaft. Where it is inclined, it is sometimes called a slant-four. In a specification chart or when an abbreviation is used, an inline-four engine is listed either as I4 or L4 (for longitudinal, to avoid confusion between the digit 1 and the letter I).

The inline-four layout is in perfect primary balance and confers a degree of mechanical simplicity which makes it popular for economy cars.However, despite its simplicity, it suffers from a secondary imbalance which causes minor vibrations in smaller engines. These vibrations become worse as engine size and power increase, so the more powerful engines used in larger cars generally are more complex designs with more than four cylinders.

Today almost all manufacturers of four-cylinder engines for automobiles produce the inline-four layout, with Subaru's Flat-four engine being a notable exception, and so four-cylinder is synonymous with and a more widely used term than inline-four. The inline-four is the most common engine configuration in modern cars, while the V6 engine is the second most popular. In the late 2000s, with auto manufacturers making efforts to reduce emissions; and increase fuel efficiency due to the high price of oil and the economic recession, the proportion of new vehicles sold in the U.S. with four-cylinder engines (largely of the inline-four type) rose from 30 percent to 47 percent between 2005 and 2008, particularly in mid-size vehicles where a decreasing number of buyers have chosen the V6 performance option.

This inline engine configuration is the most common in cars with a displacement up to 2.4 L. The usual "practical" limit of the displacement of inline-four engines in a car is around 2.7 L. However, Porsche used a 3.0 L four in its 944 S2 and 968 sports cars, the International Harvester Scout was available with a 3.2 L inline four from 1965 until 1980 and Rolls-Royce produced several inline-four engines of 2,838 cc with basic cylinder dimensions of 3.5 in (89 mm) diameter and 4.5 in (110 mm) stroke (Rolls-Royce B40). Early vehicles also tended to have engines with larger displacements to develop horsepower and torque. The Model A Ford was built with a 3.3 L inline-four engine.

The Toyota B engine series of diesel engines varies in displacement from 3.0- 4.1 L. The largest engine in that series was used in the Mega Cruiser.

Larger inline-four engines are used in industrial applications, such as in small trucks and tractors, are often found with displacements up to about 4.6 L. Diesel engines for stationary, marine and locomotive use (which run at low speeds) are made in much larger sizes.

Displacement can also be very small, as found in kei cars sold in Japan, such as the Subaru EN series; engines that started out at 550 cc and are currently at 660 cc, with variable valve timing, DOHC and superchargers resulting in engines that often claim the legal maximum of 64 PS (47 kW; 63 bhp).

The inline-four engine is much smoother than one-, two-, and three-cylinder engines, and this has resulted in it becoming the engine of choice for most economy cars, although it can be found in some sports cars as well. However, the inline-four is not a fully balanced configuration.

An even-firing inline-four engine is in primary balance because the pistons are moving in pairs, and one pair of pistons is always moving up at the same time as the other pair is moving down. However, piston acceleration and deceleration are greater in the top half of the crankshaft rotation than in the bottom half, because the connecting rods are not infinitely long, resulting in a non sinusoidal motion.As a result, two pistons are always accelerating faster in one direction, while the other two are accelerating more slowly in the other direction, which leads to a secondary dynamic imbalance that causes an up-and-down vibration at twice crankshaft speed. This imbalance is tolerable in a small, low-displacement, low-power configuration, but the vibrations get worse with increasing size and power.

Most inline-four engines below 2.0 L in displacement rely on the damping effect of their engine mounts to reduce the vibrations to acceptable levels. Above 2.0 L, most modern inline-four engines now use balance shafts to eliminate the second-order harmonic vibrations. In a system invented by Dr. Frederick W. Lanchester in 1911, and popularised by Mitsubishi Motors in the 1970s, an inline-four engine uses two balance shafts, rotating in opposite directions at twice the crankshaft's speed, to offset the differences in piston speed.However, in the past, there were numerous examples of larger inline-fours without balance shafts, such as the Citroën DS 23 2,347 cc engine that was a derivative of the Traction Avant engine, the 1948 Austin 2,660 cc engine used in the Austin-Healey 100 and Austin Atlantic, the 3.3 L flathead engine used in the Ford Model A (1927), and the 2.5 L GM Iron Duke engine used in a number of American cars and trucks. Soviet/Russian GAZ Volga cars and UAZ SUVs, vans and light trucks used aluminium big-bore inline-four engines (2.5 or later 2.9 L) with no balance shafts from the 1950s-1990s. These engines were generally the result of a long incremental evolution process and their power was kept low compared to their capacity. However, the forces increase with the square of the engine speed — that is, doubling the speed makes the vibration four times worse — so modern high-speed inline-fours have more need to use balance shafts to offset the vibrations.

Four-cylinder engines also have a smoothness problem in that the power strokes of the pistons do not overlap. With four cylinders and four strokes to complete in the four-stroke cycle, each piston must complete its power stroke and come to a complete stop before the next piston can start a new power stroke, resulting in a pause between each power stroke and a pulsating delivery of power. In engines with more cylinders, the power strokes overlap, which gives them a smoother delivery of power and less vibration than a four can achieve. As a result, six- and eight- cylinder engines are generally used in more luxurious and expensive cars.

In the early 20th century, bigger engines existed, both in road cars and sports cars. Due to the absence of displacement limit regulations, manufacturers took increasing liberties with engine size. In order to achieve power over 100 hp (75 kW), most engine builders simply increased displacement, which could sometimes achieve over 10.0 L. One of the biggest inline-fours of its time was De Dietrich 17,000 cc engine. Its cubic capacity is over twice the size of the Cadillac's 500 CID 8.2 L V8 engine, which was considered the largest engine of its type in the 1970s. These engines ran at very low rpm, often less than 1,500 rpm maximum, and had a specific output of about 10 hp/L. The US tractor industry both farm and industrial relied on large four-cylinder power units until the early 1960s, when six-cylinder designs came into favor. International Harvester built a large 5.7 litre (350 CID) four-cylinder for their WD-9 series tractors.

Other technologically or historically notable engines using this configuration include:

In the late 2000s, with auto manufacturers making efforts to increase fuel efficiency and reduce emissions, due to the high price of oil and the economic recession, the proportion of new vehicles with inline-four engines have increased considerably at the expense of V6 and V8 engines. This is particularly evident in mid-size vehicles where a decreasing number of buyers have chosen the V6 performance options.

1913 saw a Peugeot driven by Jules Goux winning the Indianapolis 500. This car was powered by an inline-four engine designed by Ernest Henry. This design was very influential for racing engines as it featured for the first time dual overhead camshafts (DOHC) and four valves per cylinder, a layout that would become the standard until today for racing inline-four engines.

This Peugeot was sold to the American driver "Wild Bob" Burman who broke the engine in 1915. As Peugeot couldn't deliver a new engine during World War I, Burman asked Harry Arminius Miller to build a new engine. With John Edward and Fred Offenhauser, Miller created a Peugeot-inspired inline-four engine. This was the first version of the engine that would dominate the Indianapolis 500 until 1976 under the brand Miller and later Offenhauser. The Offenhausers won five straight victories at Indianapolis from 1971 to 1976, and it was not until 1981 that they were eliminated as competitors by engines such as the Cosworth V8 engine.

Many cars produced for the pre-WWII voiturette Grand Prix motor racing category used inline-four engine designs. 1.5 L supercharged engines found their way into cars such as the Maserati 4CL and various English Racing Automobiles (ERA) models. These were resurrected after the war, and formed the foundation of what was later to become Formula One, although the straight-eight supercharged Alfettas would dominate the early years of F1.

Another engine that played an important role in racing history is the inline-four Ferrari engine designed by Aurelio Lampredi. This engine was originally designed as a 2 L Formula 2 engine for the Ferrari 500, but evolved to 2.5 L to compete in Formula One in the Ferrari 625. For sports car racing, capacity was increased up to 3.4 L for the Ferrari 860 Monza.

Yet another very successful engine was the Coventry Climax inline-four originally designed by Walter Hassan as a 1.5 L Formula 2 engine. Enlarged to 2.0 L for Formula One in 1958, it evolved into the large 2,495 cc FPF that won the Formula One championship in Cooper's chassis in 1959 and 1960.

In formula One, the 1980s were dominated by the 1,500 cc turbocharged cars. The BMW model M12/13 turbo was notable for the era for its high boost pressures and performance. The cast iron block 4-cylinder turbocharged Formula One motor, based on the standard BMW M10 engine introduced in 1961, powered the F1 cars of Brabham, Arrows and Benetton and won the world championship in 1983. In the years 1986 and 1987, the version M12/13/1 was tilted sideways by 72° for use in the extremely low Brabham BT55, unfortunately the design was not successful, probably due to cooling issues in the tight compartment. The 1986 engine was said to produce about 1,300 hp (969 kW) in qualifying.