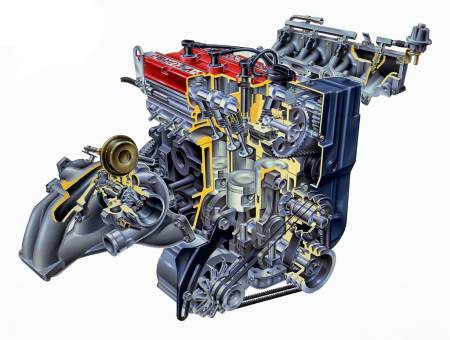 The YB series of 1,993 cc (121.6 cu in) engines are based on the older Pinto engine block, and were introduced in the road-going Ford Sierra RS Cosworth in 1986 with 204 PS (150 kW; 201 bhp). With 5,000 units built for homologation purposes in Group A, both for rallies and touring cars. Racing versions could develop about 400 hp (298 kW; 406 PS). A limited edition evolution model was introduced in 1987, the RS500, with power now exceeding 550 hp (410 kW; 558 PS) in full racing trim. The RS500 came to dominate touring car racing in its heyday from 1987 to 1992, winning multiple championships and major races in Europe, Japan and Australia. This included wins in the three major races, the Spa 24 Hours held at Spa-Francorchamps in Belgium, the Bathurst 1000 at Mount Panorama in Australia, and the InterTEC 500 at Fuji in Japan. 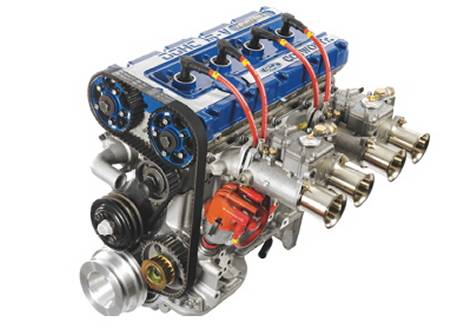 Further evolutions of the YB included a reduced-emissions road version, as well as the block used in the Escort RS Cosworth (which used the Sierra floorpan). The engine stopped being used on new cars in 1997, with the Focus WRC and road-going Focus RS relying on Zetec designs 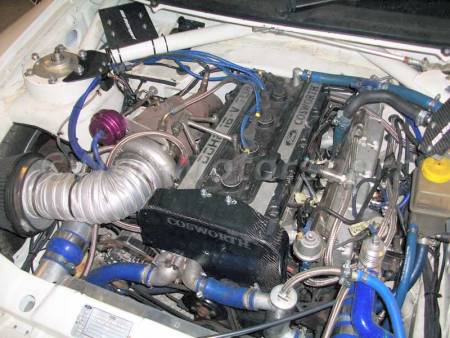 The most common engine is the original YBB (3 dr and 2wd Sapphire), which can be easily  tuned with chip and turbo modifications to increase the boost level. However, the 4x4 head  is the ideal base since the early type has less water jackets and is susceptible to  blowing head gaskets with serious hikes in boost.

To begin with, you’ll need to upgrade the actuator to -31 (dash 31) type and upgrade the  management chip to increase the fuel and boost level too - this will typically be to  around 270/280bhp. We would recommend that you also fit a good stainless exhaust such as  our Mongoose range, plus a K&N filter.

After that stage, you need to swap the injectors for 803s – commonly known as Dark Greens.  To this you’ll need a different chip again, plus a 3-BAR MAP sensor to up the boost to 19  PSI (1.3 BAR) resulting in approximately 320-330bhp.

Beyond this level, we’d recommend fitting a Group A or multi-shim head gasket and for extra  security in high-boost applications, and an ARP stud and nut kit.

However, around this level, the standard Garrett T3 turbo will have reached its limit  although there are now several paths to take in turbo choice. These though are always a  trade off between turbo lag and driveability – hence why going straight to a T4 isn’t  always a good move. Popular choice is to fit an Escort T34 or a hybrid T3 along with a  larger intercooler. T38’s are also available although these aren’t an off-the-shelf Garrett  unit and are seen more as a hybrid. You should see power potential with this to around  460bhp, whilst the T34 will give you power to around 380bhp.

At this point – and especially if you want to use a T4 with power potential to the touring  car levels of 540bhp - the engine needs to be purpose-built to suit. The reason is you’ll  need extra head work in terms of porting, different cams (although BD14s are the limit on  the street), lower compression ratios and long stud conversion. The trick is making the most  of the unit whilst producing power without huge amounts of lag. Once you get to this stage,  we can advise you on the best way forward, depending on the type of engine you have.

A different route, and still popular way to tune the YB, is to return it to the original  N/A application, which involves raising the compression. For this, we stock Accralite  forged pistons to increase the ratio to as much as 12.5:1 although they can be machined to  lower the CR since they have raised crowns for this purpose.

On top of this modification, the head needs the ports seriously opening out and for  ultimate horsepower applications, larger valves installed. The cams too need swapping for  non-turbo profiles although they aren’t designed to work with the standard YB hydraulic  lifters and therefore need converting to solid lifter type.

The bottom end is fine for this type of aspiration since the rods and crank are both steel.  We would recommend however, that the rod bolts are upgraded for high-revving applications.  For ultimate power though, we also stock steel H-section rods. Lastly, you will need to  swap the turbo inlet manifold for a twin DCOE type allowing either 45/48 side draughts or  throttle body fuel injection. In this form, you should be able to achieve in excess of  225bhp+.