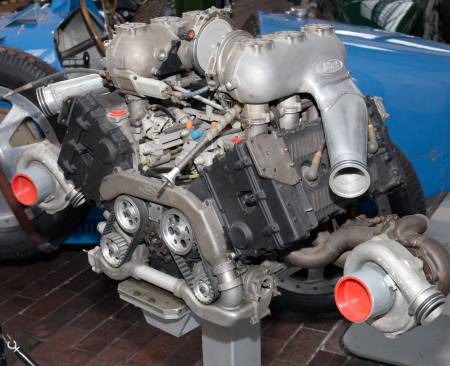 Cosworth experimented with turbocharged BD derivatives, before settling on an all-new turbocharged 1,500 cc (91.5 cu in) V6 engine to be badged as the Ford TEC (internally it was known as the GB-series). This had a long development history dating back to the 1984 British Grand Prix at Brands Hatch where Cosworth and Ford's competition department agreed to build a new turbo engine to replace the outdated DFV. The TEC raced only briefly, in 1986, with the Haas Lola team and in 1987 with the Benetton team. The development of the GBA engine at Cosworth became the subject of a British TV documentary in Channel Four's Equinox series, broadcast in 1986.

The GBA was designed by Keith Duckworth who originally chose to try and develop a modified 4 cylinder sports car engine as he believed 4 cylinder engines were more compact and economical than a V6. However, after numerous failures of the test engines which were eventually traced to an incurable vibration at the crankshaft, Duckworth designed an all new 120° V6 engine instead, the same configuration as the Ferrari V6 turbo engine. As time had been lost in trying to get the 4 cylinder engine to work, Ford and Cosworth's plan for the engine to debut with Haas Lola in 1985 was pushed back to the 1986 season.

The engine made its Formula One debut with 1980 World Champion Alan Jones driving Haas Lola's new car, the Lola THL2 at the 1986 San Marino Grand Prix. Jones qualified in 21st place and retired after 28 of the races 60 laps due to overheating. Jones also recorded the engine's first finish when he placed 11th in the Belgian Grand Prix. Jones and team mate Patrick Tambay captured the Ford V6 turbo's first ever points when they finished 4th and 5th respectively in the Austrian Grand Prix, with Jones backing up in the next race in Italy with a 6th placed finish, the final points the engine would gain in 1986.

Producing approximately 900 bhp (671 kW; 912 PS), the turbocharged V6 is the most powerful Formula One engine designed and built by Cosworth. With Haas Lola not competing in 1987, Benetton, having lost the use of the 4 cylinder BMW engines when the German giant pulled out of Formula One, signed with Ford to race their V6 for the season. While in 1986 turbo boost had been unrestricted by the rules, 1987 saw the FIA introduce the pop-off valve to the turbocharged engines in a two-year plan to outlaw the turbos and make all Formula One engines 3.5 litres and naturally aspirated by the start of the 1989 season. While Cosworth adapted the TEC to 1987's 4.0 Bar turbo limit and the new 195 litre fuel limit, development of the V6 turbo engine which would be obsolete in less than two years virtually stopped. Cosworth instead worked on the DFR that was introduced with Benetton in 1988. The turbo engine would be more successful with Benetton in 1987, with Teo Fabi taking the engine's first podium with third in Austria, followed by its last podium when Thierry Boutsen also scored third in the last race of the season in Australia.