The Chevrolet SSR ( Super Sport Roadster ) is a pick-up type Convertible built from 2003 to 2006 by the US automaker General Motors under the brand Chevrolet with electrically retractable folding steel roof .

The model is based on the concept car Super Sports Roadster , which on the first time shown at the 2000 Detroit Auto Show and built on a modified Chevrolet S-10 . In the fall of the same year, it was presented at the Woodward Dream Cruise and directed by then GM CEO Rick Wagoner . For the Chevrolet brand, it should act as a vehicle that should have a positive impact on the sales of other models. At the same event, a production-close vehicle was first seen in 2001 by the GM CEO.The market launch postponed by several delays until autumn 2003.  However were between December 2002 to May 2003 already Vehicles as the Signature Series. The completion of the first extraditable vehicle on 29 July 2003.

In 1999, design director at GM, Wayne Cherry , pioneered the idea of ​​a retro design pickup (heritage design). Ed Welburn , then head of the body-on-frame vehicle design department who was responsible for the vehicle's design, and his team decided to look at the Chevrolet after four modernized versions of old Chevrolet designs were considered SSR to orientate on the Chevrolet Advanced Design series of the model years 1947 to 1952.  The vehicle was developed by GM in cooperation with the ASC developed. Karmann was also involved in the development of the roof construction. involved. 70% of the development work and the construction were carried out by ASC.In the final phase before launch there were delays because GM wanted to ensure high quality of the vehicles. According to a source in the industry, the folding roof folding mechanism turned out vertically, with the individually movable panels of the roof behind the driver and passenger being laid vertically, and the flared steel wings with better quality requiring a special pressing process with several passes, rather than challenges for GM out.

The first 25 series production vehicles are part of the Signature Series. For each of the vehicles, an individual scrapbook and an individually designed metal "pedigree" box ("Ancestors" box) were created by the GM representatives, who accompanied it at public events in 2003 , in the memorabilia concerning the vehiclez. Photos or mentions were collected in the media. The equipment differs from standard-production vehicles by a numbered interior chrome plating on the bridge between the seatbacks on which signatures are from at least two GM or subcontractors directly related to the Chevrolet SSR project, A blue-violet metallic paint finish that GM called "Ultra Violet", additional SSR logos on the vehicle, additional chrome trim and additional painted parts. The vehicle with chassis number 1 went into the vehicle collection of GM and has on the plaque in the interior signatures of four people. In 2003, 23 Signature Series vehicles were auctioned on behalf of Chevrolet, 18 of them by the auction house Kruse International .

An early model of the SSR was the "Official Pace Vehicle" (dt. Official Pace Vehicle) or Safety Car for the car race Indianapolis 500 in 2003 used. GM built between three and five vehicles to the pace car on which one was from the Signature Series and has the vehicle identification number 4, the other two to four are replicas. After the originally planned Replikafahrzeug with the number 2 was not ready on race day the vehicle from the Signature Series was sent to the track. In the following years Chevrolet SSR was used in other racing events as a pace car.

In Spring , Texas, a suburb of Houston , there was a vehicle dealer that sold and sold 447 Chevrolet SSRs by 2015, of which 402 were different, accounting for about 2% of total production.

The technical basis is the GMT370 platform , which is also the Chevrolet TrailBlazer was used the first generation. With the long wheelbase variant, the TrailBlazer EXT, the frame has the width, the width and the hydroforming  shaped steel tubes for the ladder frame in common. In the model years 2003 to 2005, the vehicle has an outside length of 4862 mm, a width of 1996 mm and a height of 1631 mm; in the model year 2006The vehicle height decreased by 10 mm and the length increased by 2 mm. The wheelbase is 2946 mm over all model years. With a weight distribution of 52%: 48% (front axle: rear axle), the curb weight is 2159 kg. The capacity of the fuel tank is approx. 95 l.  The convertible top requires an average of 18 seconds to open and 22 seconds to close, and according to GM's recommendation, the engine of the vehicle should be in operation otherwise the battery voltage could drop too low.

In the models 2003 and 2004 of found General Motors V8 produced gasoline engine with the label Vortec 5300, the motor code LM4, 5326 cc, which is composed of a cylinder bore of 96 mm and a piston stroke results of 92 mm, an aluminum-made Engine block and a maximum power of 224 kW (300 hp) use; the engine output is via a four step automatic transmission having the type designation HydraMatic 4L60E and a 3.73: 1 translated Torsen - axle differential to transmit rear wheels .

The published in 2005 model of the SSR used cm³ a V8 gasoline engine with the motor code LS2 and a displacement of 5967, the results from a cylinder bore of 101.6 mm and a piston stroke of 92 mm, with the maximum power of 291 kW (390 hp) in conjunction with a six-speed manual offered for the first time transmission of the type Tremec  T56 M10 as an additional option,  the automatic transmission was carried those having the type designation HydraMatic 4L65E replaced.

For exhaust aftertreatment , the vehicle has a catalytic converter and exhaust gas recirculation .

The vehicle has tires in the dimensions 255/45 R19 front and 295/40 R20 rear, which are mounted on wheels with the dimensions 8 "× 19" front and 10 "× 20" rear. It is equipped with disc brakes on all four wheels. The front brake discs have a diameter of 305 mm and a thickness of 29 mm; the rear ones are ventilated, the diameter is 329 mm and the thickness is 20 mm. The chassis is similar in much of the Chevrolet TrailBlazer but adapted to the SSR to another car perform well. Compared to the TrailBlazer with standard wheelbase, the front wheelbase grew to 1628 mm and the rear wheelbase to 1648 mm. The front axle is a double wishbone axle and the rear axle is a rigid axle with four trailing arms and a control arm .

On safety features , the vehicle has two-stage front airbags , side airbags, an anti-lock braking system and a vehicle dynamics control . 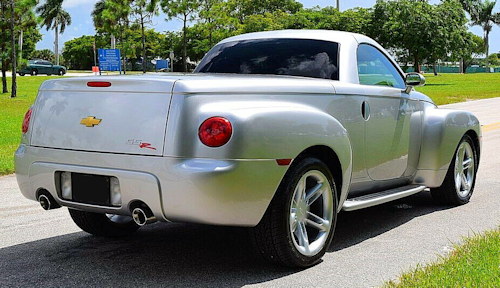