A new, trimmer El Camino was unveiled in 1978, adopting the new, more sharp-edged Malibu styling, and a one-inch longer wheelbase of 117 in (2,972 mm). The front end sheet metal was shared with the Malibu, the doors with the Monte Carlo, and the rear tailgate and bumper was shared with the Malibu station wagon. For the first time, though, the El Camino had a unique chassis - it was shared with no other Chevrolet. The front end featured a new single rectangular headlight design. The base engine was a 200-cubic-inch (3.3-liter) V6 that developed 95 horsepower (71 kW), except in California where, to meet emissions standards, the 231-cubic-inch Buick engine was the base engine . Two upgrades could be ordered: a 305-cubic-inch V8 with 145 horsepower (108 kW), or a 350-cubic-inch V8 with 170 horsepower (130 kW) that was only available in El Caminos and Malibu station wagons. It was not available on Malibu passenger cars. Among GM makes, at least, the era of bigness was fading into history, overtaken by a new age of efficiency and economy.

The 1979 model got minimal changes following its debut as a redesigned "new-size" model in 1978. Alterations to the 1979 El Camino amounting to little more than a new divided grille. However, a "small-block" 267-cubic-inch (4.4-liter) V8 joined the options list and slotted between the standard 3.3-liter V6 and the optional 5.0-liter four-barrel V8. The 350-cubic-inch (5.7-liter) V8, developing 170 horsepower (130 kW) was again available. Both three- and four-speed manual transmissions had floor shifters.

The 1981 models received a new horizontal tube grill. The 1981 engines mostly continued from 1980, but now used GM's Computer Command Control (CCC) emission system. The base 229-cubic-inch V6 made 110 horsepower (down from 115), as did the California-only 231-cubic-inch Buick V6. Optional engines were the 267-cubic-inch V8 with 115 horsepower (86 kW) and The 305-cubic-inch V8, now with 150 horsepower (110 kW). The three-speed automatic added a lock-up torque converter to aid highway mileage.

The 1982 (through the final 1987) El Camino sported a frontal appearance with a crosshatch grille flanked by quad rectangular headlights. New under the hood for 1982 was a 105-horsepower 5.7-liter (350-cubic-inch) Diesel V8, which was also offered in Chevy's full-size cars. Though mileage with the diesel was commendable, it was an expensive option and would eventually amass a dismal repair record. Gasoline-engine choices were unchanged, except Chevy's 229-cubic-inch (3.8-liter) V6 was now standard in California-bound cars, replacing Buick's 231-cubic-inch V6. 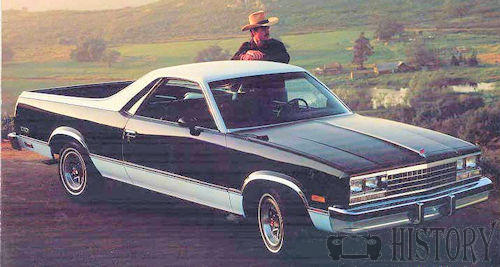 In 1983, the 4.4-liter V8 was gone, leaving the 5.0-liter version as the only optional gas V8. The standard engine was again Chevy's 3.8-liter V6 with 110 horsepower (82 kW), though California cars, once again, got a Buick V6 with similar specifications. Continuing on the options list was the 5.7-liter V8 Diesel with 105 hp (78 kW). The sister Malibu sedan and wagon were discontinued after the 1983 model year.

The 1984-87 El Camino SS was offered as a conversion (completed by Choo-Choo Customs Inc., of Chattanooga, Tennessee) to include the aerodynamic front end similar to the Monte Carlo SS, but did not receive the L69 engine package. For 1985, GM shifted El Camino production to Mexico, and the new 4.3 L was standard through 1987.

In 1991, GM unveiled an El Camino concept, which was basically a pickup variant of the Chevrolet Lumina Z34. The concept received mixed, mostly negative reviews, most of it because of the car's front wheel drive layout.

During the 1995 model year, GM had a concept El Camino based on the full-size Caprice station wagon using the grille of a 1994-96 Impala SS; this concept was destined for production, but was terminated due to GM's profitable SUV sales.