Automotive manufacturer of Lochgilphead , Scotland.Great Britain from 1976 to 1990. 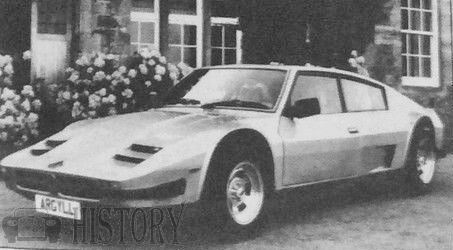 The racing driver Bob Henderson, who already made in his company Minnow Fish Carburettors carburetor , founded in 1976, the company in Lochgilphead in the Scottish county of Argyll . He started with the production of automobiles. The brand name was Argyll . Around the 1990, production ended.

The basis was a self-developed chassis tubular frame . The independent suspension came from the Triumph 2500 . The engine was transversely behind the seats in mid engine designmounted and pushed to the rear axle. The choice was initially a four-cylinder engine from Saab and a V8 engine from Rover . In both cases, was provided by a turbocharger for improved performance. The maximum speedwas specified with 209 km / h for the version with Saab engine and 275 km / h for the variant with rover engine. and was later PRV engine with six cylinders available. Another source also called an engine of Lancia with 2,000 cc displacement and a V6 engine from Rover with 2600 cc capacity. The five-speed gearbox came from ZF .  The coupe -Karosserie could accommodate 2 + 2 persons.

The name was re-used in 1976 by a new company who made a mid-engined sports car, the Argyll GT in Lochgilphead, Scotland.

The new manufacturing company was founded by ex-Mini racer and turbocharger expert Bob Henderson. The new car was named after the original Argyll of 1898, in honour of a grandfather of one of the investors who worked in the Argyll factory at Alexandria.

The only model was the mid-engined Argyll GT (or "Turbo GT"), which was based on a sturdy box section chassis with space frame clothed in a fibreglass bodyshell made next door to the old Arrol-Johnston factory in Dumfries by Solway Marine. The 1976 prototype car featured a turbocharged Rover V8 engine. A version with a turbocharged Saab engine was also mooted, but none was built. The suspension came from the Triumph 2500 and the gearbox was a ZF 5-speed unit. By undoing 10 bolts, the entire rear end, suspension, gearbox and engine came away.

Production versions of the car, which made its début in 1983, had as standard a turbocharged version of the Douvrin Euro V6 as used by Renault, Peugeot and others, together with a Renault 30 transaxle. A turbocharged V8 of 3.5 - 4.2 litres, together with the ZF transmission, was an option, but none were built. Other cars used the Lancia Beta engine and transmission, while a small number featured a Buick V6 which had started out as a stillborn Indycar engine. A top speed of 160 mph (ca. 260 km/h) with the turbo V8 was claimed. Production capacity was stated to be twelve cars a year though Bob Henderson has never stated how many vehicles were actually built. With a quoted price of £25-30,000 at launch (comparable with the contemporary Ferrari 308 GTB), however, numbers were likely to be low. Production ceased around 1990.