Car manufacturer of Braishfield , Hampshire.Great Britain from 1990 to 1998. 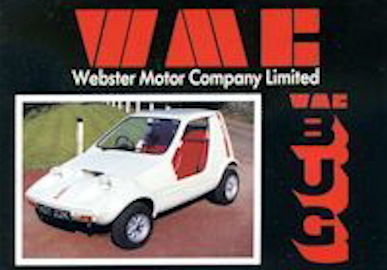 Webster Motor Company Limited ( WMC ) was a short-lived British automaker in the 1990s whose models were inspired by the funky three-wheeled Bond Bug from the 70s.

WMC was in southern England Braishfield  Hampshire. The company was founded in 1990 by Gary and Michael Webster, who had been Bond Bond enthusiasts for several years.

The 1970 introduced bug had been designed by Tom Karen . The car manufactured by Reliant until 1974 , whose special features included the hinged roof cover, is now considered one of the legendary British small car. Due to the fact that the bow had only one wheel at the front, his handling was problematic, especially in left turns; the right-hand drive tended to overturn here with uneven weight distribution.

The first car developed by WMC was a four-wheeled sports car whose design was as close as possible to that of the Bond Bug. Later, a few more versions were added. In total, WMC produced about 20 vehicles before the Webster brothers stopped producing cars in 1991. On February 3, 1998, the company was dissolved.

The WMC bug was sort of a four-wheeled version of the Bond Bug. The aim was to revive the design of the bow, but on the other hand by the four-wheeled to increase driving safety. Most components of the car were similar to those of the original vehicle. The hinged roof cover, which replaced the doors, was completely that of the bow; WMC used original tools from Reliant for their production. Compared to the three-wheeled Bond Bug, the wheelbase of the WMC Bug was about 20 centimeters longer. The front wheels had a diameter of 10 inches (25.4 cm), the rear wheels were 12 inches tall (30 cm). The ladder frame was a redesign; In the area of ​​the front end, WMC used a subframe from Mini was used. Apart from that, most of the technical components came from the Reliant Robin or Rialto .

Normal Bug .In addition, WMC offered at times a replica of the three-wheeled bow, which was delivered as a kit . This car, known as Normal , was almost identical in design, dimensions and technology to the 1970 original. From him four copies were created.Finally, WMC introduced a cabriolet version of the bug.  remained a one-off.