Automotive manufacturer of County Durham.Great Britain from 1984 to 2015. 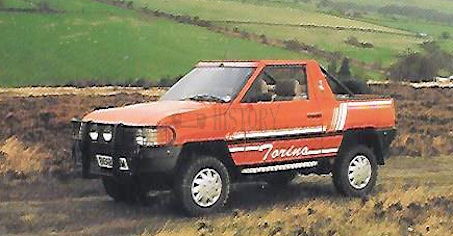 NCF Motors Limited was a British manufacturer of off road kit cars and automobiles from 1984 on.

Nick Findeisen founded in 1984 the company in Newcastle upon Tyne in the county of Tyne and Wear . He started producing automobiles and kits . The brand name was NCF . In 1990, he moved to Bishop Auckland in County Durham, 1997 to Great Whittington at Newcastle and in 2009 to Tow Law at Bishop Auckland in County Durham. On September 15, 2015, the company was dissolved. Overall the developed and made over 1,600 copies.

FourWD Engineering from Warrington continues the production of some models under the same brand name.

The first model was the Diamond Mark 1 . This was a two-door station wagon in SUV optics. The body was made of metal . The base formed a tubular steel frame. Technically, the vehicle based on the Ford Cortina , so had front engine and rear-wheel drive. A version with four-wheel drive based on the Toyota Hilux was not very successful. A single vehicle received the four-wheel drive from the Ford Sierra 4X4. Between 1985 and 1990 about 300 copies made.

This was followed by the Diamond Mark 2 . The body was shaped more angular. The drive came now from the Ford Granada . From 1990 to 1993 they created about 250 copies.

The Diamond Mark 3  found between 1993 and 1996 about 150 buyers. The changes compared to the predecessor were small ,but  now used curved windshield of the Ford Granada.

From the leisure car Road Rat based on Fiat Panda created between 1994 and 1995 only about five copies.

Derived from the Road Rat the Torino was also based on the Fiat Panda. This was available with either front-wheel drive or four-wheel drive.  Between 1995 and 1997 created about 30 units.

The sand track racing car Blitz was a one-seater. He had a two-cylinder engine from the Fiat 126 in the rear. This was found to be popular and about 400 buyers. from 1996 and 1998

This was followed by the two-seater Blitz 2 . The chassis was supplemented by a subframe from the Mini . The four-cylinder engine of the Mini was mounted in mid-engine construction behind the seats. From 1998, about 200 copies were made.

From the Traka based Range Rover originated from 2004 about 75 copies, from the Outbak on the basis Suzuki Vitara from 2005 about 110 copies and from the Sahara based on Land Rover Discovery from 2008 about 75 copies.