Tim Dutton of Dutton Cars and Allen Breeze founded in 1981, the company Eagle Cars in Lancing in the county of West Sussex . They started with the production of automobiles and kits .

Eagle Cars, who have for several years been producing the SS, a glassfibre body gullwing sportscar and convertible and as well as the RV Jeep, In 1986, Breeze left the company, and Rob Budd took over the management. In the same year, the move to Storrington and 1993 to Arundel , both also in West Sussex. 1999  ended production. Bob May Engineering from 1996 to 2004, Classic Transport from 1997 to 1999,Pilgrim Cars from Small Dole in West Sussex from 1999 to 2004, Jordan Developments from 2004 to 2006, and TEAC Sportscars from Mansfield in Nottinghamshire from 2007 to 2009 continued to produce some models while maintaining the brand name.

In total, about 2000 copies were created.

Ford or VW base available.Brought over from the States in November '81, the Eagle SS is an exotic chunk of automotive styling combining a subtle blend of Lamborghini and GT40 with unusual yet very appealing gull-wing doors, pop-up headlights and meaty rear air scoops. Based on the full length Beetle chassis, the main reasons you'll want to build this one are for its stunning Italian supercar image and pure glamour.

The very reasonable sum of £1777 including VAT will buy the complete body finished in self-coloured gelcoat with doors, bonnet, engine cover, headlamp mechanism and windows all ready fitted. Black glassfibre bumpers and a stylish dash designed along the lines of the Porsche 928 unit make up the remainder of the body parts but the kit contents don't end there. Rear lights, locks, door handles, clasps for the opening side windows, wiper motor with arm and blade plus a collection of metalwork and fastenings comprise the rest. While remaining mechanically unchanged, the chassis requires minor mods to lower the suspension and for drivers over six feet tall needs its floorpan dropped; this is a simple operation requiring some welding. Wiring the car is possibly the most arduous task but
the well written instructions, which include a section on chassis preparation, will solve the majority of problems and soon have this
delectable vehicle where it belongs . on the road.

Starting at the ground and working up, the manufacturers can supply wheels, tyres, headlamps, an alternative parallelogram wiper assembly, seats (with runners), full interior trim kit in a variety of colours and a goodly selection of Veglia instruments and interior fittings.

Various Body styles and parts over the years Eagle SS from Ford Cortina to Ford Sierra parts to Range Rover for the Eagle RV 4x4. Also Eagle Stendetto Replica of the Ferrari F 40 based on Pontiac Fiero. 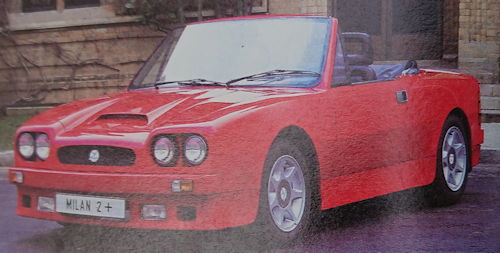 In 1988 introduced Millan 2+ (M2). This is a more substantial two-plus-two cabriolet developed in conjunction with Milan-Automobile of West Germany. Based on a strong steel backbone chassis, the M2 uses mostly Ford components: Sierra steering and braking, lowered Sierra suspension and
the drive train of modern Ford models are included. Customers can opt for engines up 2.9 liters V6 from the Granada or the Rover V8 and may even base the M2 around the XR4x4 four-wheel drive System. The M2's modern bodyshell is molded in glassfibre, including removable bumpers, spoilers and sills. Both soft and GRP hard tops are available for weather protection. All of the M2 development work was carried out in-house and is intended to pass German TUV approval tests. The car is available in the UK in component form.The price £3,240 for the kit.