Automotive manufacturer of Stoke-on-Trent , Staffordshire.Great Britain from 1982 to 1986. 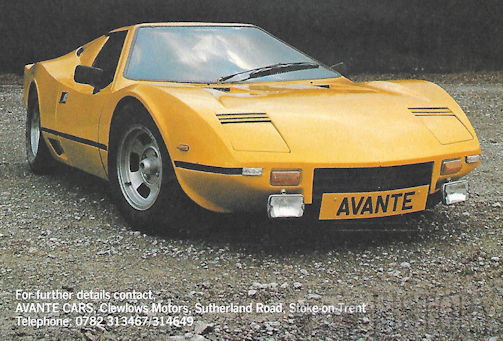 Avante Cars was a British manufacturer of kit car automobiles in the 1980s .

launched in 1982. Its sensational looks are reminiscent of Corvette and the GT40 among others, but are complemented modicum of functional practicality, afforded by a reasonably size passenger compartment and good all-round vision. The car also features conventionally opening doors and wind-up windows, while the standard of finish is flawless due to an acrylic paint job. Attention to detail is also a strong point with some features having very much a mass-production appearance.

Price at time £1550 buys a basic bodyshell kit which includes the main GRP shell with the windscreen, doors, engine and headlamp covers fitted, the
doors being hung on a steel subframe which stiffens the VW chassis. All items required to finish the car, such as wheels and seats, may be
chosen from a wide range of options. The VW floorpan, which can be supplied by the company, does not need to be lowered, but the gearlever and handbrake assemblies should be resited to be within easy reach of the driver, and the rear suspension requires decambering. A further obtains just about everything needed to complete the car to a very respectable standard. Completed cars can be purchased from around ±5500. These contain reconditioned components throughout and are trimmed professionally, the choice of engine being left to the customer.

Special paint finishes and colour schemes are available as optional extras directly from the manufacturer, as are ancillary trim items, instruments and a wiring loom to complete the basic kit. There are mechanical options such as tuned engines and uprated suspension