Automotive manufacturer of Bristol.Great Britain from 1986 to 1994. 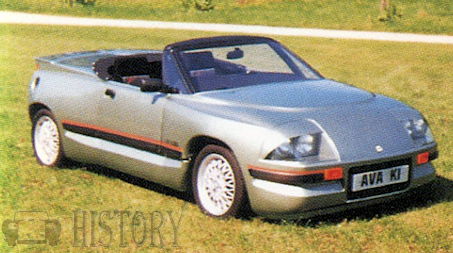 AVA Cars was a British manufacturer of automobiles and kit cars .

Nick Topliss founded the company in Frome , County Somerset , in 1986 . He began producing automobiles and kits with support from Ian Hunter . The brand name was AVA .  1988 the production ended first. Between 1990 and 1991 they continued John Burton in Bristol . In total, about 16 copies were made.

The vehicles offered in Germany - AMCA Automobilbau GmbH from Berlin from 1988 to 1990 and Interstyle Composite Products from Velburg from 1990 to 1994.

The only model was the K 1 . This was a two-seat roadster . The base was a stainless steel tubular frame with subframe Length 3700mm and many parts of the third generation Ford Escort with the 1600cc engine . The vehicle had front-wheel drive , while four-wheel drive was scheduled for a later date. The body was made of fiberglass . The co efficient of flow resistance was given as 0.295.