The BMW E70 is second-generation BMW X5 mid-size luxury crossover SUV. It replaced the BMW X5 (E53) in November 2006. It is manufactured alongside the new, 2009 BMW X6 at BMW's Greer, South Carolina plant in the USA and BMW's facility in Toluca, Mexico.

The xDrive AWD system updates previewed in the facelifted X5 have continued with further detail improvements for the E70. It uses a double wishbone suspension at the front. The manual transmission is entirely dropped, leaving only the automatic transmission.

The E70 features many new technological advancements for this class as standard equipment including BMW's iDrive system, electronic 'joystick' gearshift (no mechanical connection to the gearbox to win space in the console), LED taillamps, the first ever all-polypropylene single module fender module, and options such as head-up display HUD, active steering, active damping, and Dynamic Drive which uses active anti-roll bars which use a hydraulic servo in the middle to actively counteract body roll.

The interior of the new, larger, X5 is completely new. It has a large center-mounted display screen and the simplified iDrive, a man-machine interface system also found in the rest of the BMW model range. The E70 further incorporates many comfort options such as a glass panorama-roof, and, for the first time in a BMW, an optional third row seat which has increased the seating capacity in E70 to 7 passengers, addressing criticism of the E53 model which had been regarded as being slightly too small for this market segment.

The E70 is also the first production vehicle to use FlexRay, a new extremely fast electrical bus system; it is only used for the control of the chassis damping system. The new 'joy-stick'-style electronic space-saving shifter has since been adopted in the new 2008 BMW 5 Series.

For the 2010 model year the X5 received the new iDrive system and the BMW individual audio system along with various other minor updates.

Technical features which other BMW models use also:

New is the Park Distance system that can be integrated into the image of the optional rearview camera.

The BMW X5 M is a high-performance derivative of the X5. It was introduced to the press at the New York Auto Show in April 2009, and started appearing in BMW dealerships in September 2009. It competes with cars such as the Mercedes-Benz ML63 AMG, and the Porsche Cayenne Turbo S. At the time of its launch, it was the world’s most powerful car in its class.

The BMW X5 M features the biggest brakes on a BMW production vehicle, with 15.55" (395x36mm) rotors up front clamped by four-piston calipers, and 15.2" (385x24mm) rotors at the rear with single-piston calipers. Although traction control is standard, the M Dynamic Mode (MDM) reduces the effect of the system, allowing some wheelspin and drift-type cornering. 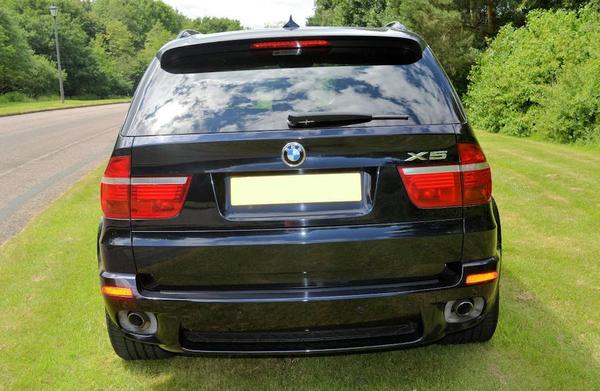