The BMW F15 is the third generation of the BMW X5 range of mid-size crossover SUVs.

The vehicle was unveiled in 2013 Frankfurt International Motor Show.

US models of X5 arrived in US showrooms in the fourth quarter of 2013. Early models include sDrive35i, xDrive35i, xDrive50i, followed by xDrive35d in early 2014.

It is a plug-in hybrid concept vehicle version of X5 with kidney grille slats, air intake bars and the inlay in the rear bumper in the BMW i Blue colour; Silverflake metallic body colour, xDrive all-wheel-drive system, specially designed roof rails, a connector for the charging cable that lights up during charging, 21-inch light-alloy wheels in an exclusive aerodynamically optimised design, a four-cylinder BMW TwinPower Turbo combustion engine and a 95 PS (70 kW; 94 hp) electric motor developed by the BMW Group, charging cable stored in the load area below the flat storage compartment, BMW ConnectedDrive with Remote app. The electric motor can be driven at top speed of 120 km/h (75 mph). The battery mode has range of 30 km (19 mi)

The vehicle was unveiled in 2013 Frankfurt International Motor Show.

The vehicle was unveiled in 14th RETTmobil trade fair in Fulda (xDrive30d).

BMW claims the new X5 is made of ultra-high-tensile steel in the body structure, thermoplastics in the side panels, aluminium in the bonnet and magnesium in the instrument panel support to make the new BMW X5 lighter. Depending on the model, the new X5 is as much as 90 kg lighter than a comparably equipped corresponding model from the previous X5 generation.

BMW X5 and the corresponding Security models were built in BMW Spartanburg plant in the USA. X5 Security's special security features themselves are installed in the Toluca plant in Mexico. 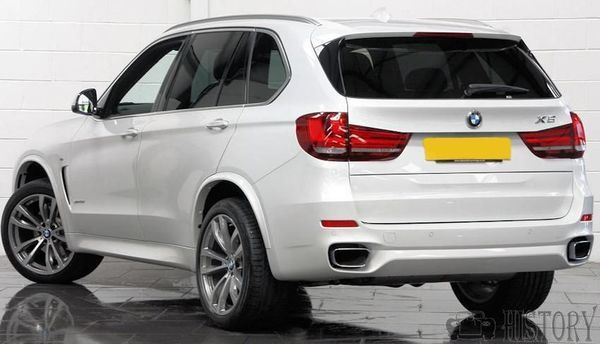