The BMW E53 is the first-generation BMW X5 mid-sized luxury crossover SUV. It was produced from 1999-2006 and has been replaced by the BMW E70. The E53 was developed at a time when BMW still owned Land Rover and as such shares many components and designs with both the Land Rover Range Rover L322 model (specifically the Hill Descent System and Off Road Engine Management system) and the BMW E39 5-series (specifically engines and electronic systems). The entire in-car entertainment system (Radio Function, Navigation System, Television and Telecommunications systems) are shared with other BMWs and L322. As a result the X5 model earlier models and L322 can be easily upgraded with the newest BMW technologies.

The history of the X5 begins in 1994, when ideas began on a BMW sports utility vehicle after the acquisition of Land Rover. Eduard Walek was named project leader and chief engineer of the E53. Chris Chapman joined BMW Group's Designworks in California later and began working with Bangle in Munich on two full-scale clay models of the E53 for two months. By the autumn of 1996, design work was approved and the design basis for the X5 (E53) was defined, 35 months prior to production. After supplier and engineering involvement, the final design freeze was reached in the first half of 1997, with prototypes being tested from the second half of 1997. Design patents were filed on June 10, 1998 and December 9, 1998, being registered in the U.S. on January 18, 2000.

The takeover of Rover in 1994 proved to be very beneficial for BMW in the development of the X5. BMW engineers were able to look at and use Range Rover technology and parts in the development of the X5 - one such example would be hill-descent control. In many respects, the design of the X5 was influenced by its British counterpart; for example, the X5 got the two-piece tailgate straight from the Range Rover. Many parts and electronics were also taken directly from the E39 5 Series parts bin to save costs.

In contrast to the Range Rover models, the X5 was designed as a sporting road car: its off-road capabilities are significantly less than those of Land Rover. BMW reportedly worked hard to ensure it was referred to as an SAV (Sports Activity Vehicle) instead of an SUV (Sports Utility Vehicle).

Even though the X5 was an all-wheel drive vehicle, BMW chose from the start to route 62% of the engine's torque to the rear wheels, making it feel as close as possible to the company's rear-wheel drive sedans.

Since the start of production the entire in-car entertainment system (Radio Function, Navigation System, Television and Telecommunications systems) is based on a very flexible automotive computer system. As a result the E53 models can all be easily upgraded with the newest BMW technologies including BMW's Bluetooth System, the DVD based Navigation system, as well as BMW's CD changers that play MP3s

The X5, along with the BMW Z4 roadster, BMW X6, and soon BMW X3 are currently manufactured in BMW's South Carolina plant in Greer and at the BMW de México plant in Toluca, Mexico, alongside the BMW 3 series, BMW 5 series and BMW 7 series. Since 2009 the X5 has also been assembled in limited numbers in Kaliningrad, Russia by Avtotor.

A one-off version known as the X5 LM was equipped with the BMW S70/2 V12 engine from the Le Mans winning BMW V12 LMR. It was used by Hans Joachim Stuck to set a lap record at the Nürburgring in 2000.

In 2000, development on mid-cycle updates began scheduled for 2003. By late 2001, a radical design update was chosen favoring the new brand design theme. In 2002, following discontent towards the 2001 E65 design, a more conservative appearance was instead chosen and frozen for 2003 production.

In July 2003, the X5 LCI (Life-Cycle Impulse) was presented for the 2004 model year at the IAA 2003 in September, with new headlights, a few new exterior colors, a new four-wheel drive system and upgraded engines. The grilles were enlarged, as well as their actual slats being modified in a 'flame surfaced' style. In keeping with the E39 facelift of 2001, the 2004 X5's headlights got corona rings around all four headlamp projectors. The tail-lights also received a facelift similar to the BMW E39, and the exterior glass went from a "dotted" pattern to a cleaner "line" pattern. BMW invented a new four-wheel drive system dubbed xDrive shared both in the X5 and X3 in 2004. Instead of using the previous X5 system which consisted of power being split 62-38 (rear wheels-front wheels) and DSC to brake wheels losing traction, xDrive could vary power to the front or rear axles in milliseconds, transferring up to 100% of engine power to either axle, thus allowing the vehicle to regain traction quickly.

Originally announced in the end of 2003 along with the rest of the X5 facelift, the X5 4.8is first started shipping in April 2004. In had a new larger 4.8 L engine (which replaced the 4.6 L engine), and was also later used in the 2005 750i/Li. It also included a slightly modified bodykit (parts of the bottom bumper became painted the body color), 20" wheels, and along with the 4.6is, were the only X5's ever to have a large chrome-tipped exhaust which hid the quad pipes. 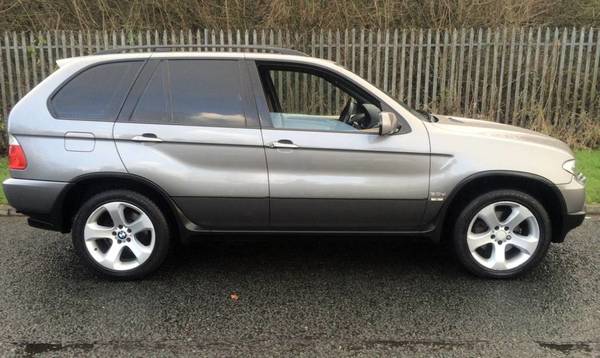 Along with the rest of the BMW line-up (apart from the E65 7 series), the X5 got Bluetooth kits straight from the factory if ordered with the Premium Package.

Specifically, the 4.4i & 4.8is models got xenon HID headlamps as standard equipment in the United States.

The X5 was not fitted with the new BMW R6 engine, which increased power for both the 2.5i and 3.0i I6 versions of the 2006 X3 and Z4 significantly. It is rumoured that BMW held back deploying the engine in the 2006 X5 so as not to waste development costs in retooling the assembly line, and to make way for a more dramatic unveiling of the all new 2007 BMW X5. In fact, 2006 also marks the end of the E53 X5 as well.

The 'Security' edition is an X5 variant with safety glass, heavy-duty material and ballistics-resistant steel. debuted at the 2003 Frankfurt Motor Show. 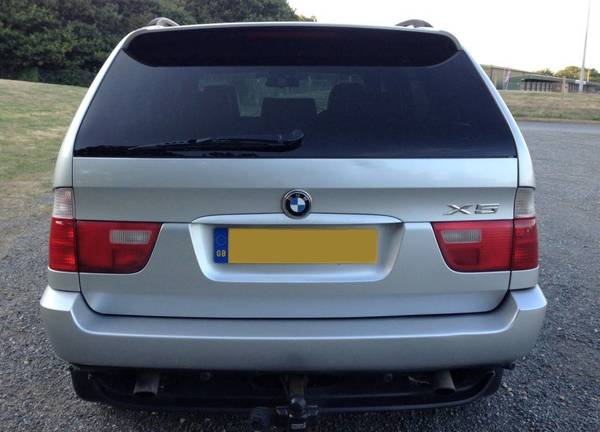