In terms of design, the E28 is a further development of its predecessor, from which some characteristic design features have been adopted. With the E28, BMW introduced technical innovations such as on-board computers, driver airbags and anti-lock braking systems in the 5-series. The diesel and Eta models designed for low fuel consumption and an M5 were also newnamed variant with higher engine power. The significantly improved performance of the E28 compared to the E12 - like its interior design - was largely welcomed by the specialist press in the early 1980s. On the other hand, the external appearance, which hardly differed from that of its predecessor, was often the subject of criticism in contemporary publications. Towards the end of the 1980s, it became apparent that the E28 was increasingly technically outdated compared to direct competing models such as the Mercedes-Benz W 124 or Audi 100 C3 , especially with regard to chassis and aerodynamics. In retrospect, the E28 is rated as a solidly constructed, robust and rust-resistant vehicle. For BMW, the E28 was an economic success. 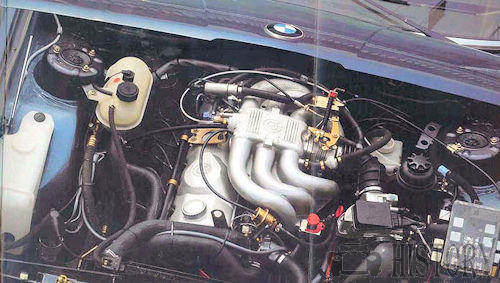 The "baby six" engine found in the 520i, 525e and 528e models is known as the M20, a 12-valve SOHC inline six-cylinder design. It had seven main bearings and seven cam shaft bearings, a rocker arm type valvetrain driven by a composite rubber timing belt. US market M20s came with cast aluminum acoustically tuned, common plenum intake manifolds and a single throttle body. This engine was first available in the European market for model year 1976 in a 2.0 L carbureted version. It later grew to 2.3 L in the E21 323i, then 2.5 L in the E30 325i and also 2.7 L in the 325e and 528e models. It is also very similar to the later 24-valve engines as in the E36 and E46 3 series models, with the same basic block dimensions.Top speed is 111 mph (automatic models).

The big six engine found in the 528i, 533i and 535i/is models is known as the M30. The M30 is also a 12-valve SOHC inline six-cylinder design. It has seven main bearings, four camshaft bearings and a rocker arm type valvetrain. US M30's also came equipped with cast aluminum acoustically tuned common plenum intake manifolds and single throttle bodies. Unlike the M20 it has a chain-driven valvetrain. Its larger dimensions allow for a longer stroke and larger bore, which makes for almost 3.5 L displacement in later engines.

The M535i was introduced as a sporty version of the regular 535i, although the M535i does not feature any unique BMW Motorsport-designed drivetrain components it is, however, equipped with an M-Technic suspension, wheels and body panels not found on the standard 535i. Combined, these items distinguish the M535i from the regular 535i. The E28 M535i was introduced at the 1984 Paris Auto Salon. Unlike the hand-built E28 M5, the E28 M535i was assembled on the standard E28 assembly line in Dingolfing, outside of Munich. An additional batch of cars was built at BMW's Rosslyn, South Africa factory using Complete Knock-Down kits supplied from Germany. BMW did not import the E28 M535i to North America for two reasons: 1# the M brand had not yet been established in North America at the time and thus held little equity with the consumer and 2# the cost of adapting the M-Technic body panels to fit the contours of the government-mandated bumpers was highly prohibitive. Instead, BMW of North America created the 535is, essentially a standard 535i equipped with front and rear spoilers, sport suspension and sport seats, which was sold exclusively in the U.S. and Canada. Total M535i production: 10335 cars

The M5 came with a big six engine known as the S38. This engine is similar to the M30, but has a 24-valve cylinder head, duplex timing chain, dual overhead cam layout and shim and bucket style valvetrain. In addition to the top end revisions, the S38 also had six individual throttle bodies and intake trumpets fed by a cast aluminum intake plenum. This engine was designed for high power and durability at very high engine speeds. In the E28 chassis it was one of the fastest sedans in the world for its time, and it remains legendary among enthusiasts today. 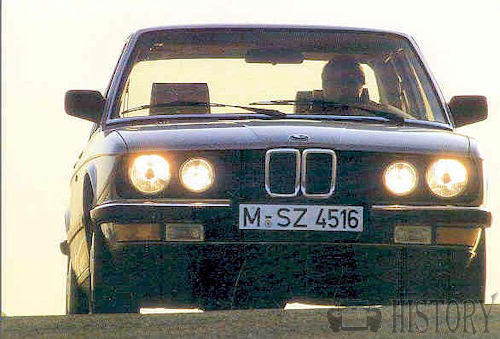 Octopussy BMW 518i West German police Two of these cars are seen in a short chase scene when Bond commandeers an Alfa Romeo GTV6 and makes haste towards Octopussy's circus. These two cars are in pursuit.