In the North-American market the E34 succeeded the BMW E28 in May 1988  with two models. The 525i used the BMW M20 engine while the 535i used the larger M30. The cars were a blend of BMW tradition and modern technology. BMW's traditional FR layout and straight-6 were used, providing the smooth engine and optimal weight distribution BMW customers had come to expect. New 5-series also had a much stiffer body and was more streamlined than its predecessor, and had design cues introduced in 1986 on the 7-series by designer Ercole Spada.

The E34 was among the most reliable luxury cars on the market, earning the best-in-class ratings from Intellichoice in 1991, and still considered one of the most reliable BMWs ever made. It was also one of the safest cars on the road during its production, providing airbags, 4-wheel anti-lock brakes, and a very rigid body structure to protect occupants in the event of an accident. It was also equipped with automatic stability control (ASC) or traction control (ASC+T) in later years on higher-specification variants.

Models were distinguished in the same fashion as BMW E32 7 series cars - by the grille. V8 models (and 520/525 after 1994 for the 1995 model year) were equipped wide grille, while other sported narrow "kidneys". 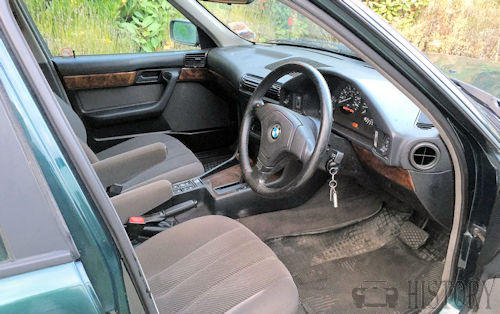 The 525i was built throughout the E34 production, and in 1992 was offered as a wagon (touring version) in the USA. In June 1990 (1991MY), the engine was switched from the single overhead cam M20 engine to the double overhead cam M50B25 engine, raising power from 170 to 192 horsepower (141 kW - US Specifications were: 168 to 189 hp gain.) Also, fuel economy improved by ten percent, and a change from a timing belt to a timing chain improved reliability. A further revision of the 525i engine took place in 1993, when VANOS was added to the M50 engine which was designated the M50TU. The TU represents a Technical Update, reflecting the variable valve timing technology (VANOS) added to the intake camshaft. VANOS brought no horsepower increase, but flattened the torque curve from about 3,000 rpm up to redline at approximately 6,300 rpm. Torque on the US VANOS Engine was raised from 181 ft-lb to 184 ft-lb. 0-60 mph times with automatic transmission dropped to 9.1 sec. vs. 10.0 from the Non-VANOS equipped M50 motor - a significant improvement. M50 engine was the most popular variant sold in NA The 525i was also the most popular E34 model globally - close to 250,000 units were produced.

The 525iX was the only four-wheel-drive version in the E34 series. It was available both as a sedan and a touring wagon version. This version was equipped with M50B25 engine, and automatic or manual transmission. It features a computer-controlled rear and centre differentials. The centre differential normally would divide 36% torque to the front axle and 64% to the rear axle, but could adjust the ratio according to driving conditions in case wheels of one of the axles started to slip. Only 9366 BMW e34 525iX were made, this model is very rare today.

In 1993 BMW added a 4.0-liter V8 to the 5 Series lineup. It was available in both sedan and touring models (the latter not in US). Its large, torquey engine, upgraded brakes, and 5-speed automatic or rare optional 6-speed transmission (offered in 1995 in North America, and from 1993 to 1996 in Europe) made it very competitive in the sports sedan market. Only 3203 examples of the 540i 6spd were produced, in the following versions;
HE51 LHD European Limousine; 797 Examples HE52 RHD European Limousine; 249 Examples HE53 LHD North American Limousine; 1524 Examples HK31 LHD European Touring; 499 Examples HK32 RHD European Touring; 62 Examples HE98 RHD South African Limousine; 72 Examples
The HE98 was made in Rosslyn South Africa for the local market. 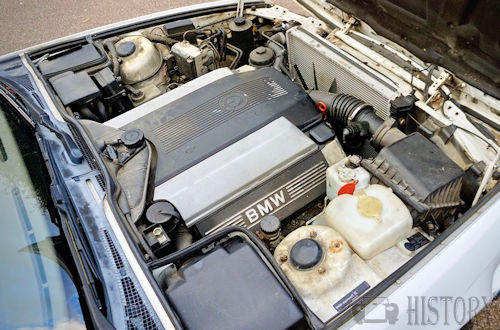 A rare 540i M-Sport model was built in 1995. This package included not only a firmer suspension and sport seats, but also used many parts from the M5, save for the engine and transmission. 204 "M-Sport" models were built, 139 of them with a 6-speed manual. Canada also got a special version — the M540i — which was similar to the American 540i Sport but had even more M5 parts, such as 345 mm floating front rotors, 18-inch M-Parallel wheels, and various trim pieces. Only 32 of these cars were built, all with a manual transmission. Australia was the final market that received one of the M-Sport 1995 540i 6 speeds. 70 "540i Manual Limited Editions" were produced, all manual and all individually numbered. They came with full M5 interior and the "throwing star" M-System II wheels, but did not have the Motorsport S38 engine nor the M-tech exterior kit fitted.

In its last year of production, it also sported the 6-speed manual gearbox that had been taken from 540i/6 E34. This gearbox then followed through to the next generation of 5 series: the E39.

As with many M-Series cars, the body's styling was upgraded with aerodynamic and cosmetic enhancements to outline its sportier nature.

Along with a modified suspension, the M5 was outfitted with 17 and 18-inch (460 mm) alloy wheels. Interestingly, one of these wheel models was the 17-inch (430 mm) M System wheels, which had two interchangeable fascia known as Turbine and Throwing-Stars (or T-Stars). These wheels are still highly sought and praised amongst BMW enthusiasts,and are sometimes worn without any fascia.

A few enhancements to the body's cosmetics and functionality, as well as a slew of engine and transmission evolutions, have appeared throughout its years of production. Among those, BMW's VANOS variable valve timing technology made its first appearance in the M50 2.5 L engines built in September 1992 and later.

Both the E34 BMW 530i and 540i shared the M60 engine, which used Nikasil bore linings. In America and the United Kingdom this made both susceptible to premature engine wear, as high sulphur content in petrol in those markets resulted in deterioration of the linings. BMW then introduced an Alusil version of this engine, which solved the problem. In the USA and UK sulfur rich fuel is being phased out.Nikasil engines are unlikely to be a problem today, as cars with affected engines are off the road or have received replacement engines, and or were not affected.