The BMW E12 BMW 5-Series was made between 1972 and 1981. The E12 was the first series to bear the 5 Series name: the '5' denoting BMW's fifth 'New Class' platform. Designed as a replacement for the popular BMW New Class mid-size sedan, the E12 5-Series models were smaller than the large BMW E3 sedan but larger than the two-door 2002 models. The E12 was replaced by the BMW E28 5 Series in 1981, although production continued until 1984 in South Africa.

The 1970 BMW 2200ti Garmisch show car designed by the Bertone Design Centre led by Marcello Gandini set the style for the E12 5-series. Designed to compete with the Mercedes-Benz W114 sedans, the E12 models were fitted with a variety of engines. 1.8 L and 2.0 L M10 I4 engines from the older Neue Klasse sedans were used in the 518 and 520, respectively. A six-cylinder version of the 520, built with a 2.0 L M20 belt-driven engine was also available from 1977 on (to coincide with the minor restyling). The 525i, 528i, 530i, and M535i, were fitted with M30 six-cylinder engines as used on the large E3 sedans and E9 coupes. With the exception of the 520i, four-cylinder and 2.0 L six-cylinder engines were fitted with Solex carburetors (although in the UK the four-cylinder 520 was fitted with twin Stromberg 175CDET carburettors). The 520i used the mechanical fuel injection system (Kugelfischer) from the BMW 2000tii and BMW 2002tii. Six-cylinder versions were available with dual Zenith two-barrel carburetors or Bosch L-jetronic fuel injection. Fuel-injected models contain the i letter at the end of their model badge. Although BMW had always located turn signal stalks on the right hand side of its steering wheels, the E12 was their first model to have the stalk on the left side. 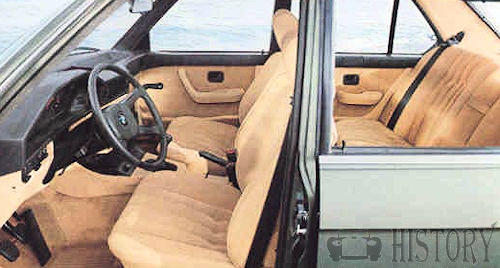 With the introduction of the BMW E23 large sedan in 1977, the E12 received a minor restyling. The rear-mounted gasoline filler door was relocated to the side of the car and the taillights were widened. The hood, originally designed to clear the large air filter assembly for cars fitted with dual Zenith carburetors, was redesigned to a give a 'power bulge', and the dashboard ventilation was repositioned to improve air distribution.

Several low-production versions of the E12 were built. In 1978, the Motorsport 533i was produced for a short time in the German market featuring a 3.2L engine. The M535i, featuring a 3.5L engine with special styling such as Motorsport front and rear spoilers, Recaro-brand sport seats, a close-ratio transmission and limited-slip differential, larger brakes, and other styling cues such as Motorsport striping down the sides of the car and on the front airdam, was available between 1979 and 1981 with 1410 cars produced. In South Africa, the 530 MLE was produced as a light-weight homologation special for racing. These Motorsport E12's are often considered the first production models that the BMW Motorsport division ever produced.

Due to high import duties in South Africa, BMW sent E12 cars as complete knock down (CKD) kits to be assembled in South Africa for its own market. An E12/8 was built in the South Africa market just as the new E28 body replaced the E12 elsewhere. The E12/8 was essentially an E12 body fitted with the E28 suspension, electronics and interior.

On the Belgian market, there was a BMW 518 “deluxe” version. Only one thousand of these cars have been sold. It was a BMW 518 equipped as the 528i top model plus other luxury items such as headrests on the back seats. It was rumored that this special version was produced for the Iranian government, as a car for top officials under the shah’s rule. Due to the Iranian revolution these cars were never delivered. Instead, they have been sold as a special version in Belgium.

The Portuguese market also received nearly 700 CKD units due to the local regulations that demanded a certain amount of vehicles sold in Portugal to be locally assembled.

For the Swedish market not the complete BMW 5 range was offered. For Series 1 the models BMW 518, BMW 520 and BMW 520i plus BMW 525 were offered except the BMW 528. The range of Series 2 was reduced to three models: BMW 518i, BMW 520i and BMW 528i. The characteristic for the Swedish market was a BMW 518i and a BMW 520i, which had the same 2 litre engine, but the BMW 518i had a poorer equipment. That was the reason why it got the lower label in the 5 Series hierarchy. The BMW 520i was fitted with chromed wheel rings and a locable fueller cap. It was also fitted with headrestraints in the rear, an armrest in the middle of the rear bench, steering wheel height adjustment, seat height adjustment for the drivers seat, a wooden shifter knob, rear heater and the trunk was covered with grey plastic.

The American market E12 differed in several ways from the original German market versions. American-market E12s in the later years were generally sold as 'upscale' models and as such they were fitted with power windows, wood trim, and usually leather interiors and air conditioning as standard. The E12 5-series used a Behr air conditioner that was notorious for being too weak for American temperatures. A well-known legend is that, in an attempt to convince BMW that a better air conditioner was needed, two BMW engineers were treated to a long trip to Texas in the rear seat of a black BMW 530i with the power windows disabled.

BMW chose to sell only fuel-injected six-cylinder versions of the E12 in the American market: the 530i and later the 528i. The American market imposed several restrictions such as bumper regulations, sealed-beam headlights, and emissions requirements. As such, American-market E12s were fitted with lower compression pistons, special larger bumpers designed to withstand a 5 mph (8.0 km/h) collision with no body damage, and fender-mounted front turn signals. Emissions equipment such as EGR (Exhaust Gas Recirculation) and an air pump were used on the 530i, along with modified exhaust manifolds called Thermal Reactors. The latter caused several engine problems including burned exhaust valves and overheating, often resulting in warped or cracked cylinder heads. A separate defect in the 530i cylinder head design prompted a lawsuit against BMW. As a result, in 1980 BMW offered replacement cylinder heads for owners whose cylinder heads had cracked, even if the warranty on the car had expired. In 1979 the 528i replaced the 530i. The new model featured several improvements for the American market: the Thermal Reactor and air pump system were replaced with a 3-way catalytic converter and the car's Bosch L-jetronic fuel injection system was now fitted with an Exhaust Gas Oxygen sensor. For the 1980 model year, a 5-speed manual transmission replaced the previous 4-speed.